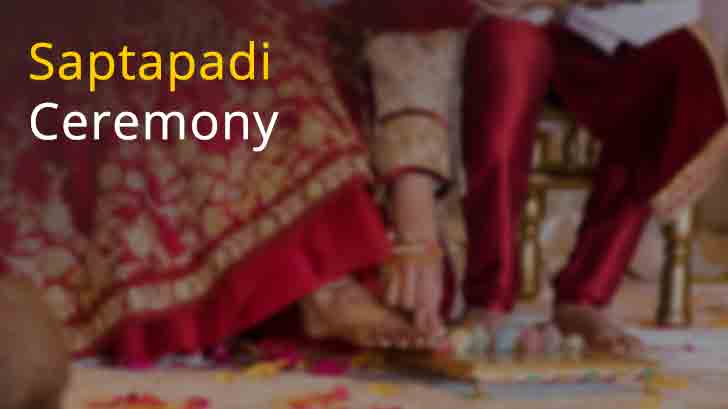 The moment of Saptapadi is perhaps one of the most awaited rituals of the entire Hindu wedding process. This scene looks straight out of a romantic Indian movie when the bride and the groom take seven rounds around the ceremonial fire. While it may appear to many as simple walks around the fire while the priest recites the mantras and vows, there is a deep significance behind the Saptapadi ritual. Each round or step signifies seven vows that the bride and groom make to each other.

Saptapadi in Sanskrit quite literally translates to ‘seven steps’. But, do you know the deep hidden meaning of these steps, which are popularly known as “saat phere”. The couple takes full circles walking clockwise around the Agni (the Fire God), representing the seven principles and promises they make to each other known as saat vachan or the Seven promises of marriage.

These seven vows are adapted from the ancient Hindu scriptures and are considered the most sacred part of the entire wedding. In fact, Saat phere is probably one of the most recognizable moments of a Hindu marriage ceremony.

Every Hindu wedding ritual has its significance and one cannot be done away with. All these ceremonies revolve around the main one which is called Saptapadi, Sapta meaning seven and Pada meaning steps, which translates to saat phere. Hence, the marriage revolves around the sacred fire seven times.

What is the process of a Saptapadi Ritual?

After the completion of the Kanyadaan ritual, the groom’s sister ties the end of his scarf to the loose end of the bride's sari or the dupatta/chunni of the lehenga with betel nuts, coins, and rice. These three items symbolize unity, prosperity, and happiness for the couple. The knot, which is from the Granthi Bandhanam ritual, represents the eternal bond that comes with marriage.

The couple, their parents, and the priest seat nearest to the Agni. The groom takes the pinky finger (or hand in some cases) of his bride and leads her for the first four pheras, and they switch phases and the bride finishes the last three pheras by leading him. While the couple is making their rounds, the priest dictates mantras about specific spheres. Also meanwhile, family members and other guests around the mandap bless the couple by showering flower petals and rice.

After finishing the seven rounds, shlokas are recited where the bride and groom seek blessings from Vishnu, the preserver of the world, and Lakshmi, the goddess of wealth. These shlokas bring the Saptapadi ritual to an end and are considered officially man and wife. It also depicts that the couple has tied themselves together and vowed to remain with each other for seven lifetimes to come.

There are many regional differences when it comes to executing this ritual. In South Indian tradition it is customary for the couple to take seven steps with the groom leading his bride by her pinky finger around the fire. Some regions in India end the ceremony by making the bride touch seven betel nuts with her toe, while her groom helps her keep her balance.

Saptapadi is mostly considered to be performed at night, during the most auspicious hour of the wedding as prescribed by the consulting priest.

List of Saat Vachan of Marriage and Their Meanings:

The following is a list of the seven promises of marriage or the ‘saat vachan’ in Hindi that the couple makes as they complete each full circle around the fire. Each of these pheras or steps holds a very significant meaning for both the bride and the groom - meanings that ensure that they will work together to make this marriage healthy, successful, and prosperous.

Just like any other recitals in Hindu weddings, these vows are recited out loud in Sanskrit, however many priests do indulge in explaining each vow in the respective languages so that the couple and the audience can understand.

What is the significance of the Saptapadi Ritual?

The marriage vows or the seven promises of marriage form the center of a Hindu wedding. The couple utters the words as an expression of their future intentions as well as promises they wish to preserve in their wedded life. The vows cover the generally accepted dos and don'ts of a successful matrimonial. These cows cover everything from individual roles to putting each other’s happiness first, from bearing the responsibility of rearing a family together to doing right by the children. They promise to enter the marriage as friends rather than submitting to some age-old defined roles.

What Indian cultures adopt Saptapadi as their wedding ritual?

Followed by most Hindu communities, the Saptapadi rituals are performed at weddings of Punjab, Uttar Pradesh, Bihar, Tamil Nadu, Kerala, West Bengal. Although Saptapadi is addressed by different terms in different regions, the vows and rituals methods remain similar. The importance of fire or Agni and the recital of vows are two prominent factors in every Saptapadi ceremony.

Marriage is a bond that is everlasting. All the saat vachan during the saat phere of the Saptapadi ritual reinforce the couple's intent to stay together through thick and thin of life, till death does them apart.