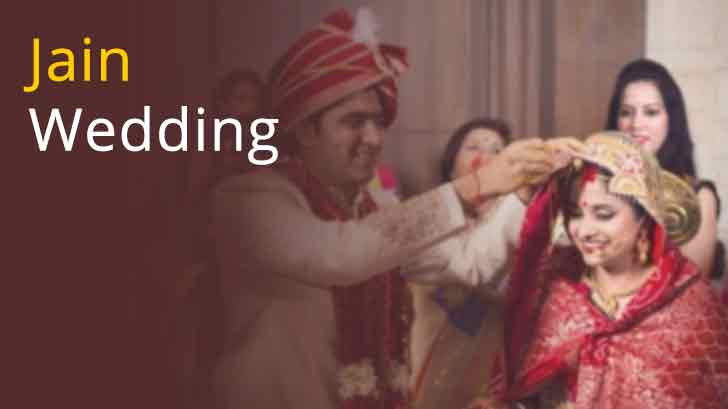 Jainism is one of the most prominent religions practiced in the rich diversity of India. You probably know that Jains are a peace-loving community with a great sense of spirituality that guides their traditions. Jain wedding traditions are known for their simplicity, sanctity, purity, and involve a number of intricate rituals and customs that are deeply-rooted in the rich traditions and values of the community.


Jain wedding traditions are sacrosanct to their religious beliefs, however, certain rituals are followed owing to the regional and cultural influences. Also, Jains prefer marrying within their own community so that the traditions are further carried on. They also prefer a Jain Pandit to conduct the wedding ceremony, however, it can also be presided over by a respected individual of the community who is well aware of the entire wedding process and its significance.


The wedding rituals among Jains may vary significantly between communities and regions depending on the two sects of Jainism. The Shwetambar Jain weddings are mostly influenced by Hindu wedding rituals in North India while the Digambar sects follow rituals influenced by that of Western and South India. However the prime rituals are practically uniform between the two sects all over India.


Let’s take a look at the colorful traditional rituals of a Jain wedding which takes place with a lot of zeal and enthusiasm.


This is the first pre-wedding custom in Jain tradition. In Lagana Lekhan, the auspicious date for the wedding is written. It’s a small pooja organized at the bride’s home attended by close relatives and friends. Here, the priest decides a date and time that is auspicious and well-suited for the wedding. This marks the new start of the two families.


After the Lagana Lekhan, which was conducted in the bride’s place before, the letter containing the date and time of the wedding is sent to the to-be-groom’s house. Later, the groom performs the Vinayakyantra puja, after which the pandit reads aloud the Lagana Patrika Vachan for all the assembled guests to hear.


This Jain wedding function is similar to a tilak ceremony in other Hindu weddings, where mainly a puja is held at the groom’s home. The bride’s family visits the groom’s house and the bride’s brother has to apply a tikka on the groom’s forehead signifying his acceptance to the family. The groom is also presented with gifts like jewelry, clothes, money, etc.


Mehendi - Like most weddings in India, Mehendi (bridal henna ceremony) in Jain communities is held among communities in north India. The bride gets henna paste tattoo designs on her hands and feet. This fun event, which is held 2 -3 days before the actual wedding, is usually attended by all female members of the family as well as close female friends.


Bana Betai - Bana Betai is followed by the Marwari Jain community of Rajasthan. It’s the ritualistic bath before the wedding. Instead of Haldi or turmeric paste used in most Indian weddings, the bride and the groom are applied chickpea flour (besan) by the married ladies of their respective families. Later, both of them take a bath and change to fresh, new clothes.


Mada Mandap - One of the first rituals on the wedding day, it’s a pre-wedding pooja. The priest performs a few sacred poojas to sanctify the mandap - the spot where the wedding is to be solemnized.


Ghudchadi - The Ghudchadi is the function where the groom starts with the Barat on his horse. The females of the house fix the headgear and apply tilak on the groom’s forehead before the procession or baraat begins.


Baraat and Aarti - Upon reaching the wedding venue, the groom and his baraatis are welcomed by the bride’s family. The bride of the brother and the groom exchange coconuts. The brother also presents him with more gifts.


Then the bride’s mother and other married ladies of the house give a formal welcome to the groom with an aarti while singing traditional folk songs known as Mangal Geet.


Kanyavaran - Then comes one of the most emotional customs for the bride and her parents. The bride is brought to the mandap. The father of the bride places one rupee and 25 paise coin along with some rice in his daughter’s right palm and then gives her hands to the groom’s hands. He makes a declaration of giving their daughter away to the groom in marriage. The priest chants Vedic mantras and pours while pouring holy water on the couple's joined hands for three times.


Mangal Pheras - The pheras are one of the most important of Jain wedding rituals similar to Hindu wedding traditions. First, the end of the bride’s saree and the groom’s shawl is tied in a knot, which is called granthi bandhan. Now the couple takes seven rounds around the sacred ceremonial fire. It is performed at a predetermined auspicious time. While the pheras are going, the priest chants sacred mantras, and guests sing the Mangal geets. After the pheras the couple say the seven vows of the wedding. They are officially considered married, and the bride is considered Vamangi which means better half of her husband. After this they exchange flower garlands and the wedding ceremony concludes.


Ashirvada - After all the wedding rituals are completed, the newlywed couple seeks blessings from the elders of both families for their happy and prosperous married life ahead. Jain values and ethics are rich that way.


Bidaai - The bride bids a tearful goodbye to her parental home and departs for her husband’s home.


Sva Graha Agamana - When the newly married couple arrives at the groom’s house, the groom’s family greets the bride at the entry with a huge, warm welcome. In Jain weddings, this ritual is called Sva Graha Aagamana.


Jina Grahe Dhan Aparna - This is an act of gratitude unique to the Jain community. The couple along with their respective families visit a Jain temple and do charity by giving gifts and donations to the less fortunate.


Reception - The groom’s family hosts a grand reception party usually a day or two after the wedding. On this occasion, the family formally introduces the bride and the groom to extended family and friends who bless and wish good luck to the couple. Lots of dancing, singing, food, and photography are to be witnessed on this function.


In Jain weddings, a bride may either wear a saree or a lehenga depending on the daily traditions and her personal choice. Jains in Gujarat wear saree while Marwari Jains prefer lehenga. Red is the preferred color of the wedding attire for the bride although different colors have been adopted with the changing time. Traditional jewelry includes lots of gold or Kundan ornaments.


For Jain weddings, the groom usually wears a kurta pyjama or sherwani and pyjama. He is also seen wearing jewelry around his neck like a pearl or gold chains or precious stones depending on the status of the family. The groom also wears a headgear known as ‘safe’ and a typical pair of shoes known as ‘mojris’.