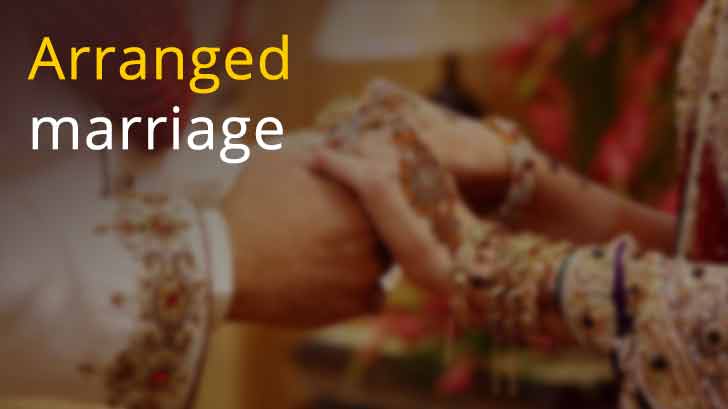 The concept of arranged marriage is still a common way to get married in India. Of course, this fact intrigues and puzzles many around the world. India is a fast developing country where modern technology blends with centuries-old traditions here. In Indian society, arranged marriage is an old school and orthodox tradition that has been followed for many generations. Even to this day the vast majority of Indians in the country or those living abroad prefer to choose an arranged marriage, especially Hindu arranged marriages. Indian parents and other relatives decide on a life partner that they consent to as suitable for their children. Moreover, various factors are considered while searching for a suitable match, and these factors may differ for boys and girls.


In India, marriage is more than just a social or legal obligation, it's a religious ritual. It is the union of not just two souls but of two families as well. Indian marriages are an ideal combination of traditions, celebrations and families.


How does an arranged marriage work in India?


Typically, in an arranged marriage, the parents or older family members search for prospective life partners for their children through their social circle, community, by hiring a local matchmaker or by advertising on newspapers and matrimonial portals online.


When the prospective candidate is found, the families from both sides agree to meet each other first and when the union is mutually agreed upon, then the formal proceedings begin. In some households, the couple is even allowed a few opportunities for courtship until the wedding (in some cases it can be a supervised meeting) while others may allow talking over the phone.


Origin of arranged marriage in India


Arranged marriages in India have been followed since the ancient Vedic period from around 500 BC. In Hinduism, Vivaha (marriage) is a sacred relationship between two individuals or souls for eternity. Vedas, the ancient texts in Hinduism, describes the eight forms of marriages namely The Brahma, Prajapatya, Arsa, Daiva, Asuras, Gandharva, Rakshasas and Pisaka marriages. The first four forms of marriages combined can be classified under the arranged marriages because these forms involve the parents who arrange and decide the prospective partners for their children.


The process of arranged marriage in India


You won’t believe it, but finalizing the perfect match in arranged marriages may take several months and even years. In arranged marriages the parents decide every aspect of the process. Once a match is finalized, the elders of the family decide to meet to discuss and figure out whether the match is suitable or not before making anything formal. There are several factors that determine the suitability of the match. While some aspects are common for both sides of the boy and girl, certain are adjusted to suit either side. Some of the criteria for an arranged marriage in India are based on cultural background, educational qualifications of the prospective boy and girl, financial and social status of the family, horoscope details for the boy and girl and physical appearance in most cases.


Following are some of the key insights into an arranged marriage in India:


Astrology is an indispensable part of Hindu weddings, especially the arranged marriages process. First and foremost, the horoscope chart or Kundali of the boy and girl are matched by a priest. The kundalis are analyzed and suitably matched for the matrimony to happen. This calculates the compatibility of the couple based on the 36 guna or points (gunas are the characteristics of the prospective bride and the groom). According to the Hindu wedding tradition, at least 18 out of the 36 gunas have to match  for the girl and the boy to be a perfect couple. The more the gunas, better the compatibility. If it is not as desired  then the priest suggests some remedies to counter the negative effects.


Meeting between the families and the prospective couple


Once the horoscopes have been matched, and the priest gives his blessings to the matrimony, the groom’s family visits the bride's family to finalize the marriage. The bride wears fine clothes and jewelry. The boy’s family often interviews to judge the girls’ domestic knowledge. The groom may or may not accompany his family during this first visit.  But if he does, the boy and the girl may be allowed to talk in private. If the groom’s family considers her suitable for their boy, then they inform the girl's family. If everything goes well, the talks for the marriage proceeds towards formalization.


After both parties agree on the marriage proposal, a formal engagement ceremony seals the deal of the match. On this day, the formal announcement of the match is made. There might be or might not be an exchange of rings between the boy and the girl (generally traditional Hindu weddings do not have a ring ceremony but you’ll notice in many). A consulting priest sets an auspicious date and time for the marriage called muhurat depending on the horoscope of the bride and the groom. The two families further exchange gifts and sweets.


When it comes to the actual wedding day in an arranged marriage, all traditional rituals are followed. Family members have important duties to perform at the wedding and the blessings of older members are sought.


An arranged marriage may have remained favored for a very long time in India, but the whole approach has witnessed some major evolution with the changing times. During olden days, arranged marriages meant the bride or groom meeting their spouse for the first time only at their wedding altar. They had less or no say while choosing their partners. Nowadays, the criteria for finding a potential match have changed a lot. While choosing a partner, their education and values are given importance. People now go for semi-arranged marriages where the boy or the girl meets the potential candidates selected by their parents and if they agree to the match they are allowed to go on a courtship period or interact with each other more freely as opposed to earlier. Couples now favor the concept of courtship that allows them to know each other before they tie the knot. These are the instances of urban areas while not much has changed in the rural areas as arranged marriages always given priority.