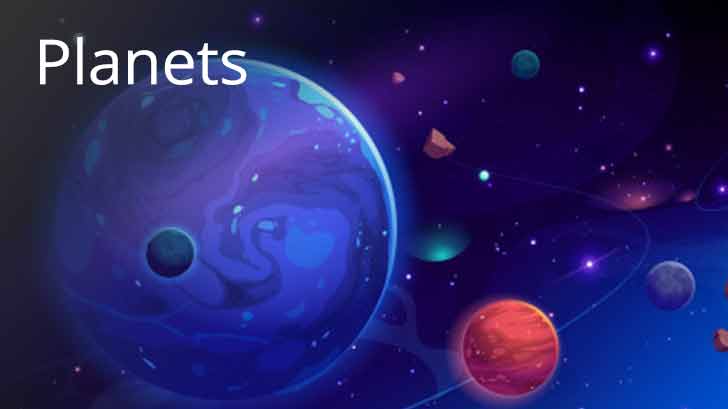 The nine planets form the basis of Vedic astrology. Without this, we cannot make calculations and predictions in astrology. Astrologers assess these planets to calculate the future times of the native and events including favourable and unfavourable ones. A total of nine planets are recognized in Vedic astrology. Going forth this article will give you details regarding all the planets and their behaviour. You might see them as just planets which are a part of the galaxy, but these play an imminent role in determining what future holds for humans in context to the behaviour of planets.

After reading this article you will know which planet is very beneficial for you and when. Also, you will understand the importance of the planet and its astronomical facts.

As told earlier, planets cannot be side-lined in Vedic astrology. From time to time, these planets transit and sit in different zodiac signs. Based on which information related to the person’s past, present and future can be known. In astrology, planets play an important role in governing human life. There are nine planets mentioned in astronomy while Vedic astrology emphasizes only on the seven major planets. The other two planets are shadow Ketu and Rahu which are considered very important. Astrology planets have their own importance which influences human life. Our solar system is a gravitational system consisting of the Sun and other bodies that revolve around the Sun.

In Vedic astrology, the Sun is considered the king of the planets. Other than the Sun, the major planets that revolve around the Sun are Mercury, Venus, Earth, Mars, Jupiter and Saturn. Besides, another planet in Vedic astrology is the Moon. Which also has a profound effect on our life. Although we all know that the Moon is a satellite of the Earth, which astrologically affects life on Earth because it is very close to us. It is a planet in the universe that affects the minds of living beings.

In Vedic astrology, two planets are defined as shadow planets, which are known as Rahu and Ketu. Rahu is known as the "North Node" of the Moon, while Ketu is described as the South Node of the Moon. It is considered the face and body of the Asura.

Effects of planets in Vedic astrology

What are the planets in astrology and how do they affect life on earth?

In the beginning, we have told you that in Vedic astrology we consider seven major planets and two shadow planets. According to Vedic astrology and astronomical study, all the major planets revolve around the earth. In the course of this movement, they keep moving from one zodiac to another and accordingly change their behaviour and eventually affect the humans both emotionally and Karmic wise.

Let us know how each planet affect our lives -

First of all, we will talk about the planet Sun. In Vedic astrology, Sun is considered as the father figure. This planet is known as the ruler of the celestial cabinet. In astrology, the Sun has been called the hottest and most energetic planet among all. It indicates prestige or official position in society. It represents our soul. It is considered to provide energy to all the planets. It brightens the whole world with its brightness.

Surya is the lord of Leo and it is high...ReadMore

he second planet in Vedic astrology is the Moon. It is considered to be the mother factor. Along with this it also affects our mind. You might be surprised to know that the moon also has a great impact on our seas, reservoirs, rivers, and major water bodies like high or low tide. Moon is also known as the "Queen" of the Celestial Cabinet. According to astrology, if the Moon is in a direct line opposite to the Sun in the birth chart of a person, it makes an auspicious period because the Sun acts to increase the energy of the Moon.

Moon is the lord of Cancer and in Taurus, it is considered...ReadMore

In Vedic astrology, the planet Mercury is considered to be a symbol of intellectuality. Mercury is a planet that shows the logical ability of a person. It is said that the ability to carry out any kind of calculation inside a person whose Mercury is strong is way different from other people. It is because Mercury is related to mathematics and it also provides astronomical knowledge. The planet is very close to the Sun according to its position and is also called the messenger of God. Along with this, it also affects the speech of the native and is related to our communication capacity. In astrology,

Mercury has ownership over Gemini and Virgo signs and is high...ReadMore

Venus in Vedic astrology is the planet which everyone wishes that it prevails in their horoscope. In astrology, Venus is the factor of love, romance, beauty and all kinds of relationships in the life of any person. It represents a wife, girlfriend or any girl in men's horoscopes and vice-versa. According to astrologers, it is also known to govern the marriage sector. In addition to that, it also takes care of happiness in a person's life and represents prosperity.

Venus is the lord of Taurus and Libra in astrology and in Pisces...ReadMore

Mars is considered a factor of anger in Vedic astrology. Along with this, it also works to increase the might of the native. Mars reflects our fighting ability and aggression towards all perils in life. It gives us the courage to deal with every type of situation. This is why having planet Mars in the benefic state makes the person ready to fight. If Mars is positively effective in the horoscope, then people who work in the areas like army, police, security and firefighting teams get immense recognition. In Vedic astrology, Mars is the lord of Aries and Scorpio. It is high...ReadMore

Guru is the causal planet of knowledge and intelligence. Of all the planets, it is the most auspicious planet. According to astrology, the influence of many unfavourable periods in the horoscope of people is reduced due to the grace of planet Jupiter. Guru or Planet Jupiter is the lord of Pisces and Sagittarius, it is high in Cancer and low in Capricorn. In the female horoscope, Jupiter represents the husband. Along with this, it also represents the factor of spirituality within the native. This arouses interest...ReadMore

In Vedic astrology, Saturn is considered to be a planet representing justice. It is also called the Karma who blesses Fruit Giver. That is, it gives fruits according to the karma of the native. This is the planet known for judging in astrology. Saturn judges the native according to the deeds done in the present time and gives the fruit accordingly. Saturn is a slower-moving planet than other planets and due to this, it takes time to give results to the native. Saturn is high in Libra and low in Aries. It rules over the zodiac's Capricorn...ReadMore

Rahu is not considered a physical planet in Vedic astrology. It is called the shadow planet. It is not a planet, basically a point in the north node of the moon. It always follows materialistic things. This planet behaves like Saturn. It is believed to be high in Taurus / Gemini and low in Scorpio / Sagittarius. There is no specific sign for Rahu as it behaves like the place and planet...ReadMore

As we have already said that Ketu is a shadow planet just like Rahu, It is commonly referred to as the South Node of the Moon. Ketu is not interested in worldly fame and enjoyment. It is opposite of Rahu. Ketu serves only to enlighten. In astrology, Ketu refers to the deeds, accumulated deeds etc. of the native's past life. Ketu is high in Scorpio and Sagittarius and it is low in Taurus and Gemini.

Therefore, planets are very important in astrology. It shows how life on earth is being handled. The astrologer has to carefully analyse all the planets in the horoscope of a person to provide a correct prediction, only after that astrology gives detailed...ReadMore