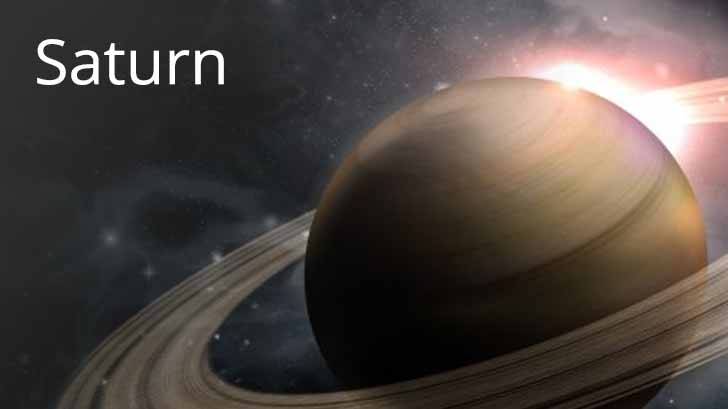 On hearing the name of Saturn, many people are immersed in the darkness of fear. People consider Saturn to be a troublesome planet. The person whose horoscope is overshadowed by Saturn's illusory, for them life becomes hell, but such assumptions about Saturn are wrong.

In Vedic astrology, Saturn might be considered a cruel planet. But along with this, it is also called the Gods of Justice. The person's actions determine his direction and results. In this article, we will learn about the planet Saturn. What is the location of Saturn in Vedic astrology? What is the astronomical importance of the planet Saturn? What is Yantra, Mantra, Gemstone and Origin? With this, what is the effect of Saturn on human life?

In Vedic astrology, the planet Saturn has been called the fruit bearer of karma. The motion of Saturn is the slowest compared to other planets. Due to which they take two and a half years to move from one zodiac to another. This time is also known as Dhaiya in Vedic astrology.

In Hinduism, he is considered a deity. Saturn, a planet in the solar system, has a different atmosphere than other planets. According to astronomy, Saturn is a planet around which there is a spherical shape. This shape is formed by celestial bodies. This body is stable due to gravity. Saturn is considered to be the sixth planet from the Sun and the second-largest planet after Jupiter in the Solar System.

Importance of Planet Saturn in Astrology

The planet Saturn has great importance in Vedic astrology. In astrology, Saturn is considered a factor of age, misery, and technicality. He is also the lord of Capricorn and Aquarius. According to astrologers, Libra is the higher sign of Saturn while Aries is considered to be its low sign. The state of Saturn is seven and a half years old which is called Sati's half year old.

According to astrologers, the person whose Saturn is high in the horoscope becomes a secret from the rank. Shani is the master of three constellations Pushya, Anuradha and Uttarabhadrapada Nakshatra among the 27 constellations.

In the horoscope where Saturn is sitting in the Ascendant house, it is not considered right from the astrological point of view. According to astrology, due to the presence of Saturn in the Ascendant house, the native is lazy and has an inferior mentality. Although the native is virtuous, he is not able to take full advantage of his qualities. With this, such people like to be alone.

If Saturn in the auspicious state is in the horoscope of the native and with auspicious planets, its positive results are obtained. As we know that Saturn is exalted in Libra. In this case, Saturn will prevail. The native will benefit directly from it. Due to the influence of Shani, the person works hard, is actionable and just. With the grace of Shani, the native achieves success in his field. The person becomes patient and serious.

The people who have Saturn in their horoscope are not afflicted and are in auspicious places, then they have to face troubles. According to astrology, if Saturn is afflicted by Mars then it causes accidents and judicial troubles for the natives.

The Mythological Belief of Saturn

According to Hindu belief, Shani is the son of Sun and Chhaya. Hence Shani is also referred to as Chhaya Putra. According to mythology, Shani Dev is opposed to the Sun. The effect of which is also seen on human life. The combination of Sun and Saturn is not considered auspicious in Vedic astrology. Shani is the god of justice. Lord Shiva himself has given this title to Saturn. It provides its fruits according to human actions. That is, a person gets the fruits of his actions.

Remedy - To avoid the ill effects of Shani, you should worship Shani Dev. With this, you should do good deeds. Donating sesame seeds and urad dal can also help you in avoiding the wrath of Saturn.