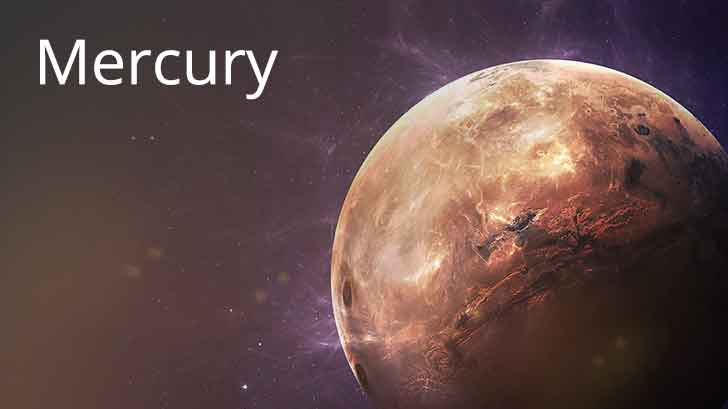 Mercury is considered a neutral planet in astrology. It gives results according to the position and effect in the horoscope of the native. There are a total of twelve houses in the horoscope which represent various aspects of life. In astrology, planets give results according to these houses. This rule also applies to planet Mercury. In this article, along with the astrological, mythological and astronomical importance of the planet Mercury, we will know how and what effect Mercury can have on our life. We will learn about mantras, instruments, gems, origin and remedies.

So let's know about planet Mercury.

The planet Mercury has its own dimension in astrology. It is considered a factor of speech in astrology. The native in whose horoscope Mercury is weak, he is expected to be shy. Along with that, he has difficulty keeping his point. With this, the person is unable to control his way of speaking, due to his speech, his work gets spoiled. In astronomical terms, Mercury is mainly composed of atoms from the solar atmosphere. Mercury is very hot due to which these atoms fly into space. Mercury is unlike planet Earth and Venus whose environment is permanent, Mercury's atmosphere constantly changes.

Importance of Mercury in Astrology

In astrology, as discussed above Mercury influences the 12 houses in our horoscope in different ways. These effects directly affect lives. In astrology, the planet Mercury is considered to be an auspicious planet, that is, it gives fruit according to the consistency of planets. If Mercury is in conjunction with auspicious planets, they give auspicious results and vice-versa. In astrology, the planet Mercury is recognized as the lord of Gemini and Virgo. Virgo is also a high sign of Mercury while Pisces is considered its low sign. Of the 27 constellations present in Vedic astrology, Mercury is owned by Ashlesha, Jyestha and Revathi constellations. In which the native-born are highly influenced by Mercury.

Effect of Mercury on Human Life

In Hindu astrology, the planet Mercury is considered to be a factor of intelligence, logic and friendship. Mercury is also considered as a factor of speech in Vedic astrology. Sun and Venus are friends of Mercury while Moon and Mars are its enemy planets.

If the effect of Mercury on the physical structure is seen, then the person whose Mercury planet is situated in the Ascendant house is physically beautiful. The native looks much younger than his actual age and his eyes are bright. According to astrology, if there is Mercury in the Ascendant in the horoscope of the native, then the person makes a rational and intellectually rich and efficient speaker by nature.

If the planet Mercury is effective in the horoscope of a person, then the communication style of the native is efficient. He is ready to attend. The person is fascinated by his words and arguments. The native is intelligent due to the strong Mercury. Such people are successful in commerce and business. Along with this, these people play a leading role in the field of communication.

If Mercury is in the birth chart of the native then he or she is likely facing it as a cruel or sinful planet. Due to this, the person may face problems physically and mentally. He or she is unable to keep his thoughts clearly. The person suffers loss in business due to the influence of afflicted Mercury.

The Mythological Belief of Mercury

According to mythological belief, Tara is the mother of Mercury and moon the father. But in Hindu mythology, Tara is depicted as the consort wife of the god Guru Jupiter. This is because according to a legend, due to the infatuation of star and moon, Mercury was born. Brahma Ji named the son of Tara and Moon- Mercury. Mercury as a planet also represents Lord Narayana. In Hinduism, Mercury holds the title of Dev. Wednesday is a week dedicated to Mercury.

Remedy - If Mercury is weak in your horoscope then you should wear the gemstone, Emerald.