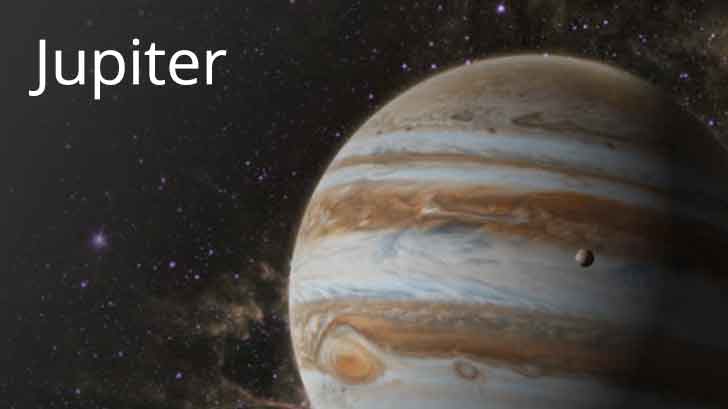 Jupiter is one of the major planets of the solar system. Which has a deep impact on us. In Vedic astrology, Jupiter is considered auspicious. It always gives good results.
In this article, what is planet Jupiter? What is the astrological significance of Jupiter? How much influence does Jupiter have on human life? You will get the answer to these questions and also learn about its instruments, mantras, origin and remedies.

Jupiter As A Planet

Jupiter has a special place in Vedic astrology. Jupiter holds the position of positivity. In astrology, Guru Brihaspati is considered as a factor of education. Astronomically, Jupiter is the fifth planet from the Sun and the largest planet in our solar system. Jupiter is made up of helium and hydrogen. Along with this, Jupiter also has 79 natural satellites.

Importance of Jupiter in Astrology

Among the nine planets, Jupiter has got the title of 'Guru'. In Hindu astrology, Guru is considered the lord of Sagittarius and Pisces. If we talk about the low and high zodiac of Jupiter, then Cancer has a high amount while Makar is considered to be his low zodiac. As already mentioned, in astrology, Guru is considered to be a factor of knowledge, in addition to these, it is the factor that influences your relationship with the child, religious work, money, charity, virtue etc. In astrology, Jupiter is the master of three Punavasu, Visakha, and Purva Bhadrapada constellations out of 27 constellations. Jupiter is seen in the horoscope for the education and development of the native.

If seen from the anatomical structure, in the horoscope of the native, if the guru is situated in the Ascendant house, then that person is likely to be lucky. The person has his fortune in front of him. Along with this, the personality of the person becomes attractive. Such people are successful in getting higher education in their life. With this, logical and liberal ideas are born present in the person. The native takes more interest in religious and charity works.

According to astrology, Cancer is the highest sign of Jupiter. Therefore, Guru will be strong by being in this zodiac sign. Due to which the native will get benefits in various fields. The money will increase in his life. The native takes more interest in religious works. The person has more inclination towards religion and always walks on the path of truth. The married person's life is likely to be happy due to the presence of planet Jupiter in the benefic state. There are high chances of child happiness in life.

Jupiter in the opposite position does not give good results for the natives. Due to this, the person may have to face many challenges in life. The native is deprived of receiving higher education and other pleasures of life. If the person tries tirelessly for education, then only he gets higher education. Without hard work, unfortunately, the native is not successful in any work he or she opts for. Thus, the person is troubled due to physical suffering. The career of the native is also full of ups and downs. For those who are married there are high chances of trouble in marital life.

In Hindu mythological texts all the major planets are called Navagrahas. The planet Jupiter also has its own legend. He is a contemporary of the planet Venus and received his initial education from the same guru, but since the teacher himself was the father of Jupiter, feeling discriminated against, Venus gave up the idea of ​​learning from him.

One of the psyche sons of Lord Brahma was Rishi Angira, who was married to Smriti, some of them also describe him as Sunitha. He had two sons named Utthya and Jeeva. The creatures were very intelligent and very calm by nature. They are believed to have conquered the senses. Lord Shiva has given the boon to Jeeva to gain fame in the name of the planet Jupiter. In this way, by the grace of Lord Shiva, Jeeva got the position of Devguru and the Navagrahas.

Remedy - Talking about the remedy, the Jupiter who is weak or less effective in the horoscope should worship Lord Vishnu. Along with this, you can also keep Jupiter War fast. The Guru also prevails by worshipping Satyanarayana.