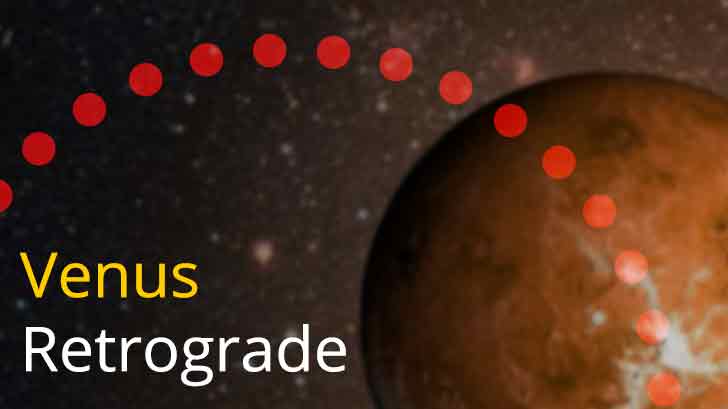 Venus retrograde astrology is a situation that takes place every 18 months. It lasts for six weeks and is considered to make some of you revisit the hidden, unwanted and weak emotions of your life while others might enjoy it as the best time of life.

According to astrology, planet Venus depicts self-respect, luxury, comfort, prosperity, marital bliss & sexual pleasures. For people who have planet Venus in a benefic state in their birth chart, such a time makes the person more jovial, friendly & loves to be surrounded by love. If such a Planet Venus starts to move in the opposite direction from its usual course this state is called retrograde.

Planet Venus is the most beautiful and shiny planet amongst the others. During the Venus retrograde, the person experiences the birth of new emotions and qualities. Unfortunately, it makes the person introverted & cut-off from social life. He or she starts to enjoy alone time. During this time, most people are likely to give up their marital life, family or pleasures to become a saint or dedicate their life to spirituality & godliness completely.

If planet Venus is in the benefic state in your birth chart then it makes the person more content and loveable. On the other hand, when it is in the retrograde position it shows a lack of happiness, love & contentment. It also gives rise to marital issues & problems and some are also likely to get skin related problems too.

If a woman has planet Venus in the retrograde state in the birth chart then she is likely to be very aggressive. Such women dominate and overrule their partner choking them in the relationship. In the worst-case even when the relationship is over they become obsessed with their ex-partners and do not stop stalking them. They get after their lives!

When Planet Venus is in the benefic state

In astrology, the nature of the planet plays an important role. If planet Venus is in the benefic state in your birth chart then you are likely to enjoy good results. Venus is considered the planet of love and pleasure. If the planet is present in the 7th house of your birth chart with some other planet then it grants you harmony & peace on both marital & family front.

If planet Venus is in the malefic state

By any chance, if planet Venus’s behaviour is malefic in one’s birth chart then you are likely to face a setback financially. You would have to work extremely hard to maintain a basic lifestyle. Unfortunately, you will also see deterioration in respect and there are high chances of facing delay in marriage or marital imbalance in the life of those who are married. Some might also face health problems during this time.

For men if the planet Venus is in the malefic state then you might face problems related to fertility and women might face severe mental stress.

As stated in the Vedic astrology, planets which retrograde are the same as normal moving planets. Amongst the nine planets, the Sun and the moon always move forward and never retrograde. However, Rahu & Ketu always move in retrograde motion. Planet Venus when it retrogrades it gives different results.

Let us know how it will impact different houses in your birth chart.

The retrograde movement of planet Venus is celestial when instead of moving forward the planet starts to move backwards. Such a movement takes place for 43 days. Every year Venus retrogrades twice.

Impact of retrograde planet Venus on our lives

How it will impact Various Houses