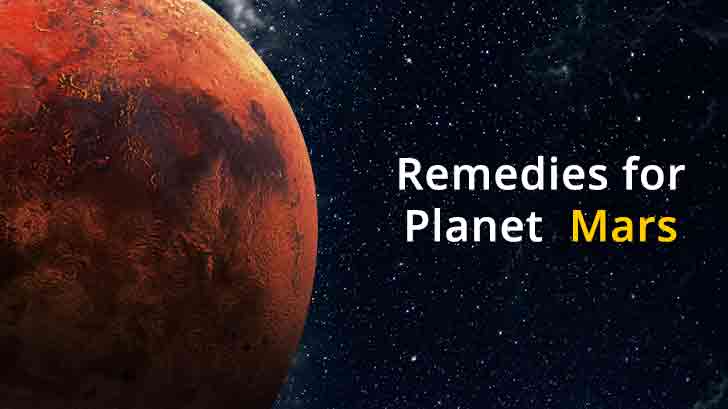 Mars in Vedic astrology is known as Mangal and is the planet of passion, energy, anger, war, assertion and separation. According to Vedic astrology, Mars is considered a cruel planet. Mars represents the fiery colour red and is considered Earth’s son. It has also been considered a factor of might. It is believed that Mars creates disharmony in the native’s life when placed in a malefic position in the chart. If it is sitting in the 1st, 4th, 7th and 12th house in the horoscope of a person, then it causes Manglik Dosh in the horoscope.

Let’s find out more about planet Mars and ways to curb its adverse effects.

More About The Planet Mars

Masculine by nature, Mars is associated with courage, stamina and vigour, but when it is placed adversely in a horoscope, it may affect the native’s physical health. It blesses the native with muscular energy, athletic abilities, heroic valours in wars, stardom. It also rules over the animal instincts of man. The presence of Mars in the horoscope makes the native attractive and beautiful. When Mars is positive, the natives do not delay in making decisions and are energetic. They can face challenges and struggles in life with courage. The natives always support their siblings and family.

The fiery red planet Mars also makes the nature of the native angry. Such natives get angry if things don’t act their way. If the person has bad effects on Mars in his horoscope, it can put the person in massive debt. This is why it is imperative to know Mars’ location in the horoscope so that you can take astrological measures to reduce the ill effects of Mars and its side effects.

But before we delve deeper into Mars and its effects, here’s a summary of the fundamental elements of Mars:

Day of the Week: Tuesday

Lord of Signs: Aries and Scorpio

A well placed Mars signifies prosperity and wealth for the person. It makes the native capable of handling leadership skills and indicates success in all the attributes governed by Mars. Being courageous, hard-working, and passionate are signs of a benefic Mars.

A weak Mars can bring adverse results and misfortunes in the life of the native.

Remedies for Mars in Vedic Astrology

You can increase the power of a weak or afflicted Mars by following some of the remedies for Planet Mars in Vedic astrology as: