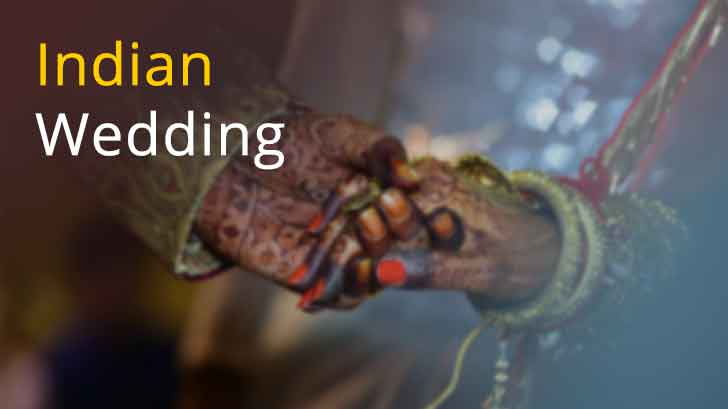 Indian Wedding: Ceremonies and Types. Know It All!

Weddings in India are a league of their own. Big, lavish and lively! Marriages in India definitely make for the biggest events in a family. Most weddings in the country span anywhere from a couple of days to weeks, depending on the type of wedding planned and the number of related functions. This is what defines Indian weddings - lengthy, joyous occasions filled with multiple ceremonies, rituals and celebrations.

Of course the different cultures that are specific to different states and regions of the country add a unique flavor to the weddings here. They also differ in religious ideologies and different sects within the broader faith. Different traditions and rituals of marriage are followed in India, and a number of them are performed to accomplish a marriage. Moreover, a number of considerations are taken into account before choosing a prospective match.

The history of marriage In Indian tradition is centuries old. The culture of arranged marriage was given the utmost importance. Traditionally, marriages also known as Vivaha in Sanskrit, often took place between the bride and groom when they were adolescents. But today, this tradition is outlawed.

In arranged marriages, marriage proposals are sent to the prospective bride or groom by the families. Horoscopes and the stars are matched between the potential match by a priest. And, when everything is in sync and the two families agree they go ahead with the preparation of the wedding process.

India is culturally diverse and is home to varied ceremonies. However, some common wedding traditions you’ll see in India are the engagement, the bridal Mehendi function (where the bride and other ladies of the family get henna patterns adorned on their hands and feet), the Haldi ceremony (where a paste of turmeric along with a combination of other mixtures is applied on the bride and the groom for beautification and blessings), the Sangeet (music and dance-filled extravaganza), the main wedding ceremony, the reception or the grihapravesh. All of these customs and traditions are either performed before, during or after the wedding.

Beyond these, when it comes to the preparation of weddings in India, it’s done in the best of one’s capacity. Be it the wedding dress, jewelry, food, decoration or arrangement, everything has to be just the perfect.

The fascinating fact about India is that it has 28 states and 9 union territories and hence Indian diaspora is huge and so is their traditions, in the marriage context. The entire spectrum of Hindu marriage itself is huge in India. Of course, different types of marriage customs are followed across the country. For instance, a south Indian wedding is not similar to a Bengali wedding or a Maharashtrian wedding or a wedding in the north.

The Hindu wedding ceremony follows the Vedic rituals and the three main rituals Kanyadaan, Panigrahana and Saptapada. The first means the giving away of the bride by the father, second means the bride and groom holding hands in front of the fire and third the most significant one is the making seven rounds around the sacred fire. But every Hindu wedding doesn’t follow all rituals. It’s interesting to know how each state or region in the country differs when it comes to wedding celebrations.