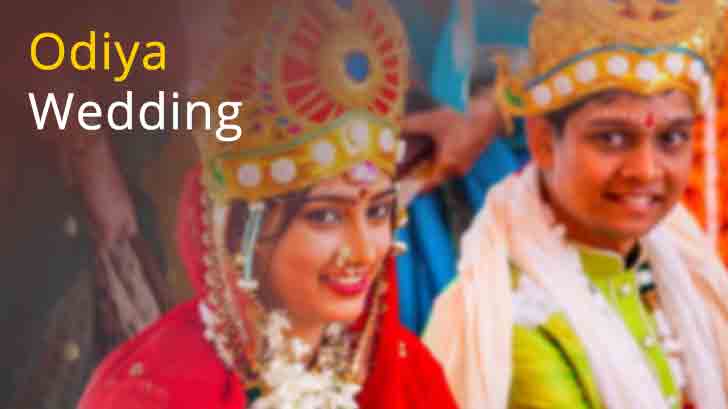 Odisha, the state in the eastern part of India, has an abundance of great biodiversity, nature, architecturally stunning temples, and simplicity of the people. This simplicity of the Odiya also  Oriya people is further witnessed in their wedding customs, very minimalistic without any ostentatious display of wealth and status. They place a lot of importance on traditional customs and adhere to their roots. The Odiya wedding rituals are carried out according to Hindu Vedic rituals that have been modified with layers of regional and cultural practices. Religious devotion plays an important role in the life of Oriya people and it is reflected in their wedding customs. The Oriya word for a wedding is Bahaghara, and while Brahmins have their weddings during the day time, other Oriya castes have weddings during the evenings. Let’s take a peek at the fascinating rituals of a typical Oriya wedding.


Nirbandh - Arranged marriages are the most preferred choice among most Odia families. The help of matchmakers are sought or through social connections within the community network. When a suitable match is found, then the horoscopes are matched of the boy and the girl. And if the horoscope is a good match, then the two families decide to meet. If both the families mutually agree at the meeting then they fix a date for the formal engagement ceremony called Nirbandh.


During an Odiya engagement ceremony, the boy and the girl are present but it’s the elders of the family who meet at the bride's home or at a temple. They give each other words which are called Sankalpa that the marriage will happen. Both families also exchange gifts as a way of accepting each other into their families.


Jayee Anukulo - The Jayee Anukolo function denotes the start of the wedding ceremony. The families order wedding cards to be printed and then they are distributed to mark the formal declaration of the wedding to the community. The first wedding invitation card is put before Lord Jagannath, the prime god Oriya people worship, ideally at his main sanctuary at Puri. This ritual is called Deva Nimantrana. The second card is usually sent to the maternal uncle's families, for both the girl and boy’s sides. A member of the family makes a personal visit to present the invitation card along with a betel leaf and betel nut as custom. This is known as Moula Nimantrana. The third invite custom is called Jwain Nimantrana, which goes from the bride’s family to the groom’s family. The father of the bride  joined by other male relatives visits the groom’s house with the invitation to personally invite the groom and his family. The families can now send invitation cards to relatives, friends and other guests.


Mangan - On the afternoon of the day prior to the wedding, the bride and groom at their respective places take part in a ritual that is akin to Haldi ceremony of other Hindu weddings. Seven married women, one of which has to be the sister-in- law applies turmeric paste on the bride and groom’s hands and feet. The bride and groom then wash themselves with holy water.


Jairagodo Anukolo - For this ceremony, a fire is lit. The fire can either be lit in an oil or ghee lamp, or as a havan. This fire is considered auspicious and has to be kept lighted until all the wedding rituals are over.


Diya Mangula Puja - In this ritual, prayers are offered and puja is conducted at the local temple of the local goddess. Items of the bride’s wedding trousseau including the wedding saree, bangles, toe rings, and a container of sindoor (vermilion) is offered to the goddess for her blessings. Interestingly, this ritual is done through the local barber’s wife. As per beliefs, the blessings of the goddess on these objects will bring about a long, happy and prosperous married life.


Nandimukha - The Nandimukh ritual takes place at both the bride and groom’s individual houses. Both fathers pray to their ancestors to bless their soon-to-wed children.


Barjaatri - As per Odiya custom, the bride’s family sends a vehicle along with a few male family members to bring the groom and his wedding entourage called barajaatri. The barajaatri are met at the entry gate of the wedding venue on their arrival. The groom’s mother-in-law or a senior female member of the bride’s family welcomes the groom with a traditional aarti and a tilak is applied on his forehead consisting of vermilion paste and rice. His feet are then washed with the water of a tender coconut. He is also fed a mixture of curd, sugar, honey and ghee before entering the wedding hall.


Baadua Paani Gaadhua - In this custom, the bride’s family informs her about the groom’s arrival. The bride is then taken for a ceremonial bath called Baadua Pani Gadhua before joining the groom at the wedding altar for the wedding ceremony.


Kanyadaan - In a Hindu wedding, Kanyadaan marks the very first ritual. The groom takes his place at the wedding altar, and shortly after the bride joins in. The father of the bride then gives the bride away to the groom with a promise from the bridegroom that he will care for her, shower love and respect her for his lifetime.


Hatha Granthi Fita - Also known as Panigrahana, in this ritual the bride’s father places her right hand on that of the groom. The couples joined hands are then tied around by a garland of mango leaves, which are considered holy in Hindu religious rites. The ceremonial fire is lit after the Hathi Granthi Fita ritual and the couple makes seven rounds around the holy fire together with their hands still holding together. These seven rounds are symbols of the seven sacred vows of the marriage.


Saptapadi - For this ritual, seven mounds of rice are placed on the ground, which the priest sanctifies. These seven mounds represent the seven hills in Indian tradition and are symbolic of all the hardships the bride has to face during her wedded life. The bride has to destroy this mound with her right foot with the groom in her aid. The couple then take seven steps together that symbolizes the start of their new life together.


Laja Homa - This ritual involves the bride’s brother who puts khai or laja, a type of puffed rice on his sister’s cupped hands. Now the groom has to put his hands under the bride’s hands and pour the puffed rice into the sacred fire together.


Sindoor Daan - The bride and groom ries from their seats at the mandap and walk outside to watch the pole star. After viewing, the couple return to the wedding stage and the groom applies sindoor or vermillion powder to the bride’s hair parting on the forehead and slips conch shell bangles on her hands. With this the wedding ceremony is considered done.


Kaduri Khela - Once the wedding rituals are over, the couple sits in a room and play games as a way to relax and feel light after all the hectic and serious wedding rituals. They play with small, white shells called kaduri and hence the name Kaduri Khela. The groom holds the shells in his closed fist and the bride tries to retrieve them by opening her husband’s fist and vice-versa.


Sasu Dahi-Pakhala Khia - Next, the groom’s mother-in-law invites him to have some food. Traditionally, he has to sit on her lap as she feeds him customary food items.


Bahuna - Later, as the bride prepares to leave for her husband’s home, her mother sings ‘Bahuna’ songs which narrates the story of the pains that she took while giving birth and bringing up her daughter. She is joined by other female relatives in her lament.


Gruhaprabesha - After the bride arrives at her new home, the groom’s mother gives her daughter-in-law a warm welcome. She overturns a pot of rice placed at the threshold of the house with her right foot. This ritual symbolizes that a bride is the incarnation of Goddess Lakshmi who is supposed to bring joy, wealth and prosperity to her new family home.


Chauthi/Basara Raati - Four days after the wedding (chauthi), the groom’s family performs a pooja where coconut is roasted. The couple’s room along with their bed is decorated with fragrant flowers and an oil lamp is placed at the bedside as a sign of a long-lasting and glowing relationship. The couple is offered to eat the roasted coconut (charu). The bride carries a glass of saffron milk to her husband. This is the night when the couple spends their first night together as husband and wife.


Asta Mangala - This comes on the eighth day from the wedding and marks the end of all rituals in an Odiya wedding. Here, the bride and the groom visit the bride’s parental home where they are treated to a grand feast. The couple usually spends the night there and returns the following day.


ODIYA WEDDING ATTIRE FOR THE BRIDE AND GROOM


The bridal attire is similar in all Odiya weddings of different regions in the state that is saree, however, the overall pattern and styling may be different. Thanks to the rich weaving traditions of the state, an array of embroideries are available for the bride’s sari look including a range of intricate zari embroidery, beaded embellishments, elaborate prints, and artwork, and another extravagant embroidery in gold threads. Traditionally, the saree is in yellow color with a red border, which is known as boula patta. In addition, saris are also worn in rich colors such as red, orange, maroon, etc.


The bride completes her look by wearing a unique headgear resembling a peacock feather; a similar headgear is worn by the groom as well.


Groom’s attire consists typically of a dhoti and over it is worn a kurta or a shirt. These may be of simple cotton weave or made of silk. To complete his look, he also wears a pair of ethnic sandals and special headgear.