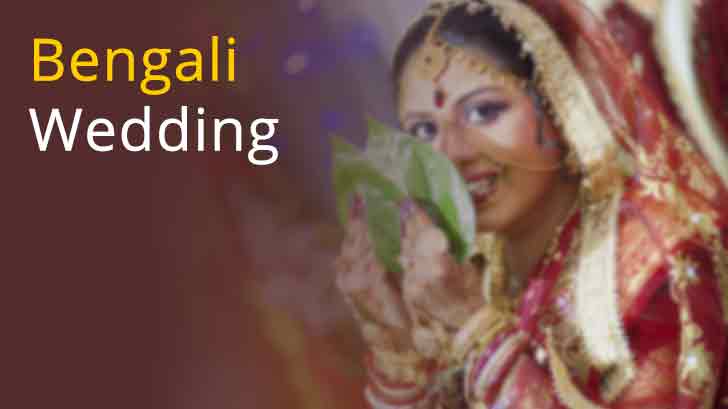 Bengali weddings often referred to as Biye are surely a visual delight, those who have witnessed it from the start to end would surely agree. Like most other Indian Hindu weddings, Bengali weddings too are an amalgamation of traditional customs and rituals with a hint of modern touch.


The weddings among Bengali society are full of color and vivacity. Bengali weddings forego showing off unlike some weddings in the North and South, and keep the roots firmly on traditional elements. They are an elaborate affair, full of color, camaraderie, and beauty, spanning for two to three days. It requires elaborate preparations to perform the rituals correctly.


The blowing of the conch shells and ululation by the women gathered at the wedding venue are most characteristic of a Bengali marriage.


Let’s walk through some of the common marriage rituals and ceremonies that we can witness in Bengali weddings.


Bengali wedding rituals begin a few months before the main wedding. Some of them might have even become obsolete with time while others are still meticulously followed.


Ashirbaad - Ashirbaad meaning blessings is an auspicious ceremony where the respective in-laws and elders of the two families assemble to shower their blessings on the bride and groom. They sprinkle husked rice and trefoil leaves on the head of the boy and the girl, and present gold ornaments or other presents as a token of their love and as a formal acceptance of the match.


Aai Buro Bhat - Pretty similar to a bridal shower in Christian Weddings, in this ceremony close friends and relatives gather at the bride’s place, and shower her with gifts. They also treat her with a traditional platter of Bengali delicacies along with her favorite dishes. Traditionally, this is the last meal that the would-be bride has in her parent’s home as an Aai Budo or a young girl of marriageable age. This is an evening dedicated to her, where her family and friends sing, dance, and enjoy.


Gaye Halud Tattva - In this ritual, the bride receives gifts that are sent to her from her in-laws. Traditionally, she is presented with significant things including sarees, make-up products, sweets, paan, curd, fish, husked rice among others.


Dodhi Mangal - On the dawn of the wedding day, at both the respective houses, the would-be bride and groom are accompanied by a few married women to a nearby pond


Bor Jatri and Bor Baran - The Bengali wedding commences with the groom and his procession or Bor Jatri proceeds to the bride’s house where the wedding happens.


When the Bor Jatri reaches the venue, they are received with much enthusiasm and the sounds of typical ululations. The mother of the bride along with other family members of the bride welcomes the groom and his family with a baran dala or a bamboo winnow. This bamboo plate  consists of auspicious ingredients like rice, betel nuts, turmeric, a bunch of bananas and a lighten earthen lamp. She touches the plate to the groom’s forehead, shoulders, chest and repeats this process three times.  Later the guests are served drinks and sweets.


Potto Bostro- The groom arrives in traditional Bengali attire of dhoti and kurta, but after he is seated at the chadnatolla (wedding altar and canopy), the groom is offered new clothes to wear during the wedding rituals is gifted by the bride’s side, especially by her maternal uncle.


Saat Paak and Subho Drishti - The bride enters the mandap and sits on a low wooden stool called a ‘pidi’. The bride’s brother and close male relatives lift her along with the pidi in a seated position and carry her around the groom, who is seated in front of the pyre, seven times. All the while the bride covers her eyes and face with a pair of betel leaves. She lifts off the leaf veil after the Saat Paak is completed.


Shortly afterward follows the subho drishti ritual. After the seven rounds, when the bride and groom meet their eyes and look at each other in the presence of the guests this is called subho drishti. Conch shells are blown and ululation sounds are made as this happens.


Mala Badal - Immediately after, the bride and groom exchange garlands of fragrant flowers while the bride is still seated on the pidi hoisted by her brothers. The mala badal is the first step which signifies their acceptance of each other.


Kanya Sampradan - The bride now sits facing the groom at the altar. An elderly male member of the bride unites her hands with the groom’s hands and it is tied together with a sacred thread. The hands will stay bound until the rituals are over. The priest then recites Vedic mantras. The Kanya Sampradan is officially the giving away of the bride to the groom.


Yagna/Hom - In Yagna, the priest recites mantras and the couple sits in front of the holy fire repeating the mantras after him. They have to periodically make offerings to the fire God or Agni is made witness to this holy union of two souls.


Saat Paak/Saptapadi - The bride and groom then take seven rounds around the fire, which are known as Saat Paal or Saptapadi. The couple is also made to touch seven betel nuts (suparis) placed on seven paan (betel leaves) using their toes.


Lajanajali/Kusumdinge - Here, the brother of the bride puts over puffed rice to his sister. The groom cups her hands from behind and they pour it together to the fire God as an offering.


Sindoor Daan and Ghomtam - After all the wedding rituals are completed, the couple is seated at the altar. The groom applies sindoor (vermilion) on his bride’s parting of the hair. Sindoor is a symbol of marriage worn by Hindu women thereafter.


After this the bride’s in-laws give her a new saree, which she uses to cover her head as a veil known as ghomta.


The couple is now officially considered as husband and wife.


Bidaai - An extremely heart-touching ceremony, Bidaai refers to the departure of the newlywed couple from the bride’s place. As the bride is leaving, she throws a handful of rice over her shoulders without looking back. This signifies her repaying the debt of her family for raising her with love and care. She then finally bids adieu and heads to her new life with her husband.


Bodhu Baran - The newlyweds are welcomed to the groom's home. The mother pours water under the tyres of the vehicle in which the couple had arrived. A vessel containing milk and lac dye (alta) red in color is placed at the entrance of the home. The bride has to step into it and leave her foot marks on a white cloth. She is now led inside the home and the elders then shower blessings on her and give her gifts.


Kaal Ratri - This night the bride comes into her husband’s home, the bride and the groom are given separate rooms to sleep on that night. It is believed that sleeping together on their first night may not turn harmonious for their married life.


Bou Bhaat - The following day in the morning, the bride prepares some dishes and serves the food to her husband and other family members. This ceremony is known as bou bhaat. The husband also presents her clothes and sweets on a platter and promises to take care of her for a lifetime.


Reception - In the evening, the groom’s family invite their close friends and relatives for a reception to formally introduce their new daughter-in-law to all the guests.


Phool Shojja - The couple’s room and bed is decked with flowers. The newlywed couple spends their first night together.


The Bengali bride’s attire is one of the most regal and elegant that makes her look a complete stunner. Usually the bride wears a Red Benarasi Saree made of silk and heavily embroidered with gold zari threads. There are different ways to drape a saree, but the ‘aath poure’ style is traditionally Bengali. She wears a veil to cover her head and a lot of jewelry. She also wears an ornate white-colored crown known as mukut or topor. The hair is usually tied back as a graceful bun accompanied by hair accessories. Yet another unique feature that a Bengali bride wears is the artistic design made out of chandan paste (sandalwood) and kumkum on her forehead centering on her big red bindi.


The attire of the Bengali groom is a Kurta, which is known as Panjabi, with a Dhoti. The groom wears dots of sandalwood paste on his forehead. He also features a conical headgear known as the ‘Topor’ that is made of Shola or Indian Cork. He also wears a garland made of tuberoses and roses. When he participates in the wedding he has to change into fine silk two-piece attire known as the ‘Jor’. The groom is supposed to carry around a brass object with a long handle known as the ‘Darpan’ at all times.