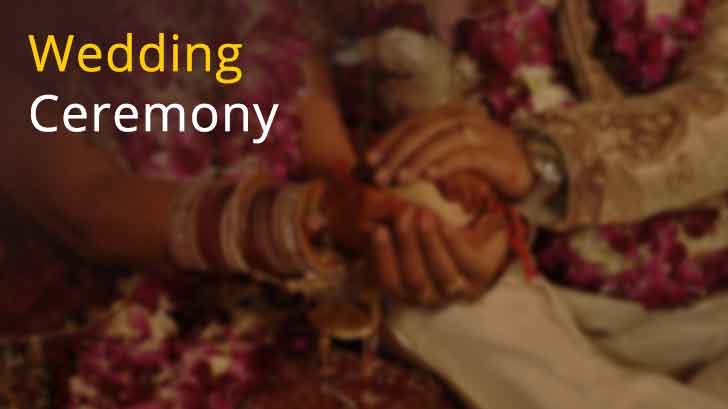 A Hindu Wedding ceremony rituals are something not everyone is familiar with deeply. There are a lot of rituals, customs and traditions involved. Not to forget all the food, fashion, fireworks and fanfare. Undoubtedly an event worth attending! India is known for its diverse culture and although there are universal elements in the wedding ceremony, each region has its own set of local rituals and customs. These ceremonies celebrate the love and commitment of the couple and also celebrate their religion and culture.


So, if you are invited as a guest, attending as a family member, or are simply curious, there are many wedding rituals and traditions that you should expect to witness at a Hindu wedding, especially ones that happen on the actual wedding day.


Read on to find out some of the quintessentially important wedding traditions one can witness in a Hindu marriage ceremony.


The Arrival of the Groom aka Baraat


The arrival of the groom is a celebration in itself in Indian weddings. The groom arrives at the wedding venue on his horse along with his entourage of family and friends, which is called baraat. They are greeted by the bride’s family amidst live music, dance and of course the traditional lit lamp called aarti. Sometimes a tilak or a red dot on the forehead of the groom is applied and a garland is put around his neck. The groom and his family are led to their place of honor inside the wedding hall. The groom sits at the mandap and awaits for the arrival of the bride. The mandap acts like the wedding altar for the important rituals to be performed.


The marriage ceremony begins with a prayer to Lord Ganesha - the god of beginnings, good fortune, and the remover of obstacles and evils. In the Hindu marriage ceremony, Ganesha pooja signals the beginning of the rest of the wedding rituals. The ceremony is also held to prepare the couple for a new beginning.


A key aspect of a Hindu marriage ceremony is to ignite the sacred fire at the center of the mandap. This fire is lit using ghee, wooden wicks to invoke the Agni (the God of Fire) to bear witness to this holy matrimony. The spirit of Agni is said to cleanse the holy union from all evil eyes and words, and build it on purity. Offerings too are made to the fire during the wedding proceeds. The bride’s brother pours three handfuls of puffed rice each time on his sister’s hands, which is cupped by the groom’s hands below and then the couple offers it to the fire together. This offering is known as Laja Homa.


The Exchange of Garlands


In this ceremony called Jaimala or Varmala, the marrying couple put fresh floral garlands around each other's necks. This ancient and important wedding tradition marks the first step to the new union and of accepting each other as partners. In many families, jaimala ceremony also is a way of fun tussle and banter between the two families. Both sides try to prevent the couple from being able to put the garland on each other by lifting them higher amid lots of giggles and laughter.


The groom ties a necklace to the bride called Mangalsutra


The groom ties a necklace of black and gold beads known as Mangalsutra often with a gold or diamond pendant on the bride. According to traditions, the Mangalsutra is invoked with the eternal blessings of Lakshmi, the Hindu goddess of wealth, fortune and prosperity. The tying of the Mangalsutra signifies a strong bond between the two for eternity.


The Seven Steps also known as Saptapadi is the highlight of Indian weddings. It is an important ritual of the Hindu marriage ceremony, particularly in North Indian weddings. During Saptapadi, the bride and groom have their loose ends of the garments tied together before making the seven circles around the ceremonial fire. The priests meanwhile recite the seven blessings or holy vows for a strong marriage. By walking around the fire the two are agreeing to the vows with Agni as a witness. This special wedding ceremony establishes the bond between the couple for the lifetime. However, the seven steps may be replaced with lesser numbers in different Hindu weddings across India.


The Newlywed Couple Shower Rice On Each Other


This ritual is typically followed in South Indian weddings, especially Telugu weddings where it is known as Talambralu. The couple shower each other with a mixture of rice, turmeric, saffron, as a symbol of prosperity, happiness and fertility. This ritual is done at the end of the wedding ceremony. Moreover, in other weddings such as in Tamil households or in Marathi culture, guests shower the couple with rice.


Good to know: Rice holds a great significance in all Hindu weddings and you’ll witness one or numerous significant rituals which involve rice in them. Keep observing!


Yet another highlight of Hindu weddings is the groom applying sindoor (a vermillion red or orange-red colored powder) on his bride’s hair parting. The sindoor symbolizes the bride’s new status as a married woman. From there on, she continues applying sindoor. Another unique way of displaying your marital status, don’t you think so?


How many of these Hindu wedding rituals have you witnessed before up close? So if you get a chance, don’t miss an opportunity to attend an Indian wedding. The wedding ceremony will transform you into a different world of a traditional cultural fest and leave you mesmerized and humbled.