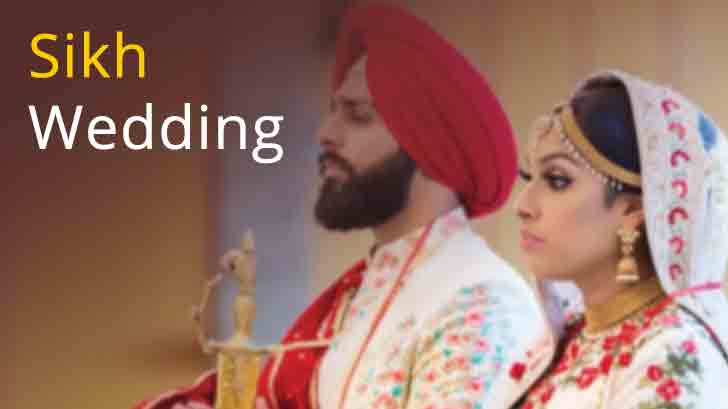 A Sikh and Punjabi wedding in India is synonymous with the big fat Indian wedding tag. A Sikh wedding is better known as Anand Karaj. Very similar to a Punjabi wedding, the only difference is that the Sikh wedding takes place in the day in a Gurudwara - a Sikh Temple where ardaas (traditional Sikh prayers) are recited.


It’s interesting to know that Sikh is a religion that follows the spiritual way of life. In traditional Sikh weddings, even the smallest of rituals hold deep meaning in the whole ceremony. Also, unlike Hindu weddings where priests play a pivotal role in the marriage ceremony, in Sikh weddings it’s the custodian of the holy book - Guru Granth Sahib in the gurudwara which solemnizes the couple.


From fashion to festivities, food to entertainment, plenty of guests and more, that’s what Sikh weddings are all about. Extravagant! Fully potential to win your heart.


Here’s everything you wanted to know about a Sikh wedding


Kurmai
Kurmai is the engagement ceremony, which marks the beginning of a Sikh wedding. The families read the holy book. Then the wedding date is finalized. Both families present each other with gifts. And after all the rituals are over the bride and groom exchange rings.


After the engagement, the groom’s family visits the bride’s home. The groom’s mother symbolically covers the bride’s head with a chunni or a scarf. His family also gifts the bride with clothes, jewelry, and other gifts. This ritual is a token of welcoming her to the boy’s family.


In this Sikh wedding ritual, a red thread is tied on the left wrist of the bride and the right of the groom. This sacred thread is said to protect them from bad omen.


Vatna is similar to a Haldi ceremony like other Indian marriages. Just before the wedding day, a paste of turmeric and mustard oil is applied to both the groom and the bride to cleanse them.


In this Sikh wedding ritual, the sister of the bride has to fill a gharoli (earthen pot) with holy water from the gurudwara for the groom and the bride to bathe after the Vatna rituals.


Now comes the bridal mehendi which is held before a day of the wedding. The bride gets her hands and feet decorated in beautiful henna designs.


Chooda Ceremony
This one holds a special place in a Sikh wedding. For the chooda (bangles) ceremony, the bride’s maternal uncle gifts her with a set of red and white bangles as a blessing on the morning of the wedding day. Traditionally a set of 21 bangles is selected for this ceremony. The bangles are first dipped in the milk for purification before putting them on the bride's wrist. Once the bride wears the bangles, it is wrapped with a white cloth so that she can’t see it till she gets ready for the wedding ceremony.


The showering of Kaleere
The cousins and female friends of the bride tie golden/silver accessories called kaleeres to the chooda of the bride that hangs on them. Similar to the Christian bouquet toss, the bride shakes her kaleere above the heads of all the unmarried girls present. It’s believed that if any part of the kaleere falls on any of the girls then she’ll be the next one to get married.


SIKH RITUALS ON THE WEDDING DAY


Known for their love for extravagance, the Sikh groom enters with a bang. The groom often decked in fine attire and gold jewelry arrives on a caparisoned horse or a nice car, followed by his closest friends and family.


It’s the meeting of the two families. Key male family members from both sides exchange garlands and greet each other symbolizing the union of the two families into one. After the milni, the groom and his side are served snacks and beverages.


The wedding ceremony called Anand Karaj takes place in the holy temple of the Sikhs. Both the families go to the gurudwara for the Laavan Pheras or the four prayers that seal the marriage, The bride along with the groom in lead walk around the Guru Granth Sahib (holy book of the Sikhs) as the laavan is recited. Later, they exchange garlands and are declared married. The wedding ceremony usually lasts for just an hour and is wrapped up before noon.


At the end of the ceremony, a ceremonial sweet called Karah Prasad is offered to the guest at the gurdwara. The sacred prasad is made of whole wheat flour, ghee and sugar.


After the wedding ceremony is over, the newlywed couple and the families proceed to the reception venue. Sikh weddings are all about close-knit families and having fun. In a Sikh wedding receptions, you can  expect a lot of music, dance, buffet-style food, and people. Here’s a tip, do wear comfortable shoes.


As the day comes toward an end, it’s time for the bride to bid farewell to her family and proceed to her new home. As she departs the bride throws a handful of uncooked rice towards her mother, a symbolic gesture to thank her family for bringing her up and trying to repay them.


It’s a sweet reunion. In this event, the newlywed couple visits the bride’s house for the first time after marriage. There is a warm welcome with gifts and an elaborate meal is served.


The wedding dress of the Sikh brides is undeniably one key reason that everyone fancy over their weddings. A typical Sikh bride will wear a heavily embellished salwar kameez or lehenga. The bride always covers her head and shoulders with a dupatta. The bride completes her look with other essential accessories including a nath (nose pin), gold bangles, a neckpiece, maang tikka (a hair pendant worn over the forehead). And of course the choodas and the kaleere.


The groom also dresses elegantly to match the bride. A Sikh groom either wears a sherwani or churidaar with kurta or kameez. All Sikh grooms must also wear a turban, as in Sikhism covering your head during a religious event is a sign of respect to the gods. A sehra or a headdress with dangling garlands and other decorative designs is also used to cover the face of the groom. Another signature accessory of a Sikh groom is a sword or kripan, which he carries on his wedding day symbolizing his responsibility to protect his wife from any harm.