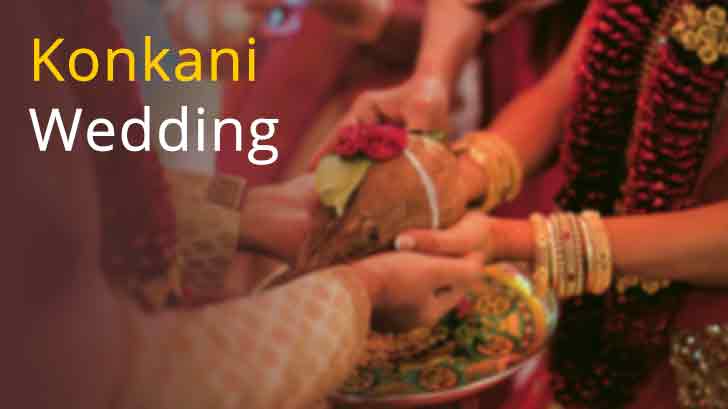 Unlike other weddings, where ritual goes on for the whole day, most of the rituals in Konkan weddings are performed early in the morning. The Maharashtrian  Konkani marriage procedure starts with finding a suitable alliance. After this, the horoscope of the boy and the girl are matched by the purohits or pandits. If the horoscopes match, the muhurat or auspicious time for the wedding is taken out.


Sakhar Puda - Sakhar Puda ceremony is the initial ritual that takes place in a Maharashtrian Konkani wedding. It can also be termed as the engagement, wherein the bride is given a sari, gold ornaments and sweet or sugar as gift or shagun, by the groom's family.

Next is the ceremony called Kelvan, which is performed at both the bride and the groom's house. It is a small puja where offerings and prayers are done to the ancestral deity or kuldevta, followed by a meal along with all family members.

Haldi - The next day, the Haldi ceremony takes place, wherein turmeric paste is applied to both the bride and the groom. This is known as Halad Chadavane. This is followed by Simant puja, wherein, once the groom arrives at the bride's place; her parents wash his feet and give him gifts or shagun-like clothes, fruits, and gold ornaments.
After this ritual wedding day rituals are performed on the wedding day


This is the most important day, once the bride and groom arrive at the venue. It is the duty of the maternal uncle of the bride to bring her to the wedding altar, where the holy mangalashtakas are recited. The bride and groom are separated by the Antarpat is a silk shawl used to separate the bride and the groom they cannot see each other.  Then the shawl is removed and the couple sees each other for the first time and exchange garlands. At this moment they are showered with unbroken rice.

Sankalp - After Antarpat, the couple asks their parents for permission to get married and take blessings. This is called the Sankalp ceremony.

Kanyadaan - After this, the bride's parents perform the most important ritual Kanyadaan, wherein they give their daughter to the groom. After the Kanyadaan ceremony, the groom ties black beads and gold chain  (mangalsutra) around the bride's neck and applies sindoor (Vermillion) in her hair parting. She in return applies a sandalwood tilak on his forehead.

Next is the very important ritual called Vivah Homa in which the sacred fire is alighted. The couple praises the Agni Dev (the Lord of Fire) in hopes of bringing the presence of the lord Vishnu onto the ceremony. The Vivaah Homa is performed in order to indicate the purity of the rituals, all conducted with the help of the fire.

Saptapadi - Saptapadi ritual, wherein the couple has to take seven rounds around the holy fire, take seven vows to support each other in thick and thin.

Karmasamapti - The wedding ceremony comes to an end with the Karmasampati ritual, wherein the bride's father, the bride, and the groom please God to bless the wedlock and shower all the happiness to the couple.


Grihapravesh  the special ritual for the bride, she goes to her in-laws officially. It is the first ritual conducted after the wedding. The groom's mother and family welcome the new couple and wash their feet with milk and water. After this the traditional aarti - pooja is performed and the bride is asked to enter the house by knocking down a glass of rice, kept at the entrance. The couple enters the house with their right foot as it is considered auspicious.

Last but not the least Reception party is organized, wherein sumptuous food is served for the guests.