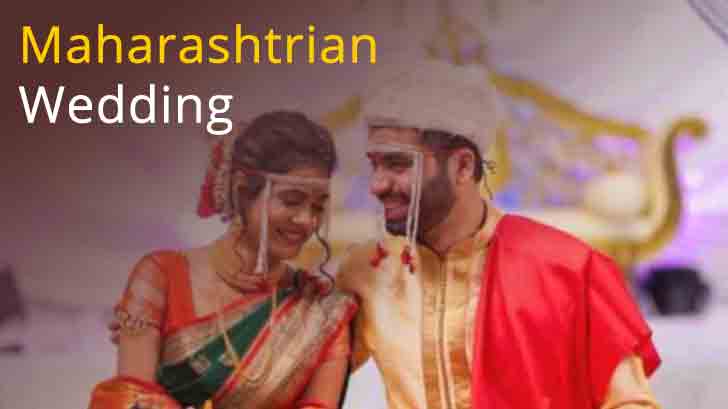 Have you been invited to a Maharashtrian wedding? And, if it’s your first time attending a Marathi wedding, then you can look up to this article for an insight into how the Maharashtrians say ‘I do’.


The rituals in a Maharashtrian wedding are a combination of Pujas, vows, and amazing festivities and rituals. Some wedding traditions are similar to some of the South Indian wedding rituals such as Saptapadhi and Kanyadaan, while some ceremonies are unique to the Maharashtrian culture. The wedding rituals of this part of India portrays the core values of the Maharashtrian culture. But wait, don’t just think it as a formal affair yet, as Marathi weddings are a melange of vibrant colors, unique customs, fun and simplicity that will leave you with a memorable experience.


Let’s have a look at what happens in a Maharashtrian wedding.


The wedding rituals start with Lagnach Bedior where family priests match the horoscopes of the bride and the groom before any proceedings. Once it has been determined that the two horoscopes are a good match, then an auspicious date for the wedding is fixed. This ritual was more prevalent when the marriage was arranged by the respective parents. Hereafter, the actual preparations of the matrimony begins.


Sakhar Puda is the official engagement ceremony in a Marathi wedding. In this ritual, the mother of the groom applies Haldi and Kumkum on the forehead of the bride and showers with gifts such as sarees, jewellery and Sakhar Puda or sweets. The bride’s mother follows the same ritual with the groom. Later, the couple put engagement rings on each other's fingers.


After the date of the marriage is fixed, wedding preparations start months in advance. The bride’s mother invites married women known as Suhasinies to make turmeric powder. They also roll out papad and make Sandege (powder made of pulses and spices). Thereafter, the shopping begins! The women then hold a Rukhvat - an exhibition where they put up the artwork made by the bride along with gifts she will be bringing to her husband’s home after marriage. Items such as utensils, personal trinkets, and the bride’s wedding trousseau are displayed.


The Kelvan ceremony is performed a few days before the wedding. Both the families and their close relatives assemble to offer pooja to their family deity to seek blessings. After the pooja is over, everyone enjoys a meal together.


This is the Maharashtrian version of the Haldi ceremony, which is organized on the day before the wedding. The turmeric pound that was made on the day of the Muhurt Karane is used on this ceremony. The married women apply the turmeric paste on the groom’s face, shoulders, forehead, legs and hands using mango leaves. And, the leftover paste is taken to the bride’s place for the similar process.


RITUALS ON THE WEDDING DAY


The first thing that happens on a Marathi wedding day is the worship of Lord Ganesha. In fact, all Hindu wedding rituals begin with a prayer to Ganesha. The couple and both the families perform Ganapati Puja seeking his blessing for a bright future devoid of any obstacle. Later in Devdevak, the family deity is invoked to the wedding mandap.


In Gaurihar Puja, the bride gets dressed in her wedding trousseau gifted by her maternal uncle. She then worships a silver idol of Goddess Parvati asking for a prosperous life.


Seeking the blessings of elders is a quintessential custom in Hindu culture. In the Punyavachan ceremony, the bride accompanied by her parents proceed to the wedding venue and asks everyone present to bless her for a prosperous marriage.


Next, Seemanpunja is done on the groom’s arrival at the wedding venue. The bride’s mother gives a warm welcome to the groom and his family. She washes the groom’s feet and applies tilak on his forehead, does Aarti and feeds him sweets.


Now, the groom heads to the mandap and takes his seat. A cloth or a curtain (called antarpat) hangs in front of the groom so that he can’t see the bride until she has arrived at the mandap. This is something that is not seen in the other Hindu weddings of the north.


The bride enters the mandap led by her maternal uncle. The priests start to chant the holy mantras known as Mangalashtakas. On the auspicious moment, the Antarpat or the curtain is lifted and the couple can see each other. The most awaited moment for the two! Now they exchange jaimalas or garlands, and everyone showers them with whole rice also called Akshata. With this the wedding rituals are started.


Here, the father of the bride gives his daughter’s hands in the hands of her new husband with blessings. A touching moment when the father-daughter duo try to hold back their tears! The groom accepts with the promise to love and respect his wife forever. Another part of this ritual is that the couple ties a piece of turmeric with a thread on each other’s hands. This is known as Kankan Bandhane, which is done to ward off evil eyes. Now the groom ties the mangalsutra around her neck and applies sindoor on her hair parting. In return, the bride applies a Chandan (sandalwood) tikka on the groom’s forehead.


The couple walks the traditional Hindu seven rounds around the holy fire known as pheras. The seven rounds symbolize their partnership and bond in their next seven lives. They also say out loud the sacred vows of the matrimony as they circle the fire.


Karmasamapti - To end the ceremony, the father of the bride and the couple prays to God for blessings. A playful Maharashtrian custom follows, the brother or other male relative of the bride playfully twists the ear of the groom to remind him of his marital duties. Often, the groom has to bribe his brother-in-law with money or presents to let his ear go. Thereafter, the newly-wed couple together seeks blessings from their relatives.


At the end of this ritual a grand lunch is savored by everyone.


Varat ritual refers to the farewell procession that sees the bride off from her paternal house to her husband’s home. While the bride bids farewell to her family and loved ones, the groom carries the Parvati idol from the Gaurihar pooja that the bride had performed earlier.


It’s the official welcoming of the newlywed couple to the groom’s house. The bride’s mother-in-law welcomes the couple with an aarti. She also washes their feet with milk and water. The bride first gently pushes down a kalash (pot) filled with rice at the threshold of the doorway with her right leg. This symbolizes that she will bring prosperity and fortune to the home. The bride’s coming home is symbolic to the arrival of Lakshmi - the goddess of wealth, fortune and prosperity. Now the bride and the groom enter the house placing their right foot first.


The Reception
Finally, last but not the least, a reception party is held where the newly married couple greet all family, friends and other guests. At this function, the bride and the groom are dressed in outfits and jewelry that their respective in-laws had gifted to them.


WHAT DOES THE BRIDE AND GROOM WEAR


A Maharashtrian bride looks gorgeous in a silk saree with elaborate golden borders in bright colors draped in a typical Maharashtrian trouser style. The color combinations in yellow or marigold with green or purple borders are usually preferred. The sarees can either be the typical traditional nine yards length saree called Nauvari or they can be the 6 yards Paithani saree. Besides, Maharashtrian brides also wear some typical jewelry like - green glass bangles or choodas, mangalsutras with two gold cups or discs, Thusi or traditional necklaces, Vaaki or armlets, and the typical Maharashtrian nath or nose pin. To complete her look, the bride puts a crescent-shaped bindi on her forehead.


The groom is dressed elegantly in white or beige kurta paired with a white Kanche or Dhoti for the wedding. In addition, they may also wear a turban known as pheta on their head or the traditional white Gandhi style cap along with a decorative piece of cloth over their shoulders.


Moreover, both the groom and the bride wear a headband called ‘Mundavalya’. The ornament is generally two strings of small pearls tied horizontally across the forehead and two strings of pearls hang below from the headband in front of the ears.


A Maharashtrian wedding has all the elements of culture, deep-rooted traditions, fun and playfulness. Now, who wants to give it a miss?