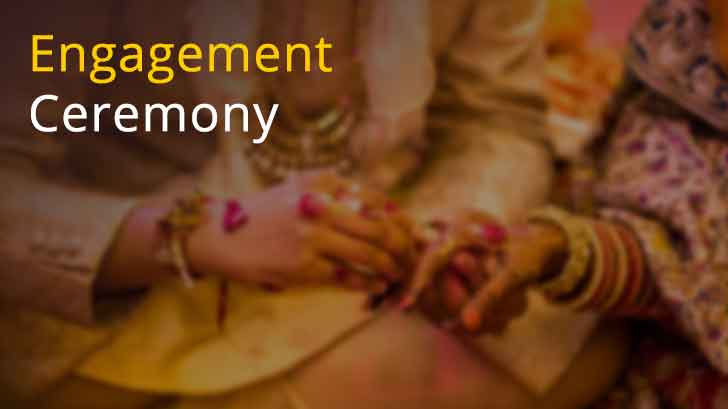 The engagement ceremony is one of the main highlights of an Indian wedding ceremony. It is a fun-filled event held at either the bride’s or the groom’s place in the attendance of relatives and close friends from both sides. This special occasion is also the moment to enjoy the excitement of exchanging gifts between the two families, dressing up in a special way for the event of course the scrumptious meal that follows.


Going by the tradition, engagements in India did not include exchange of rings between the bride and groom like they do in the Western countries but it does mark the first formal event of the wedding for the couple who are all set to be married.


A Hindu engagement ceremony may vary across different states and ethnicities. Thanks to the abundance of diversity in the country! There are various terms associated with the engagement ceremony like Mangni, Sagai, Roka Ceremony, Ashirbaad, Nischayam, etc. These are the closest events to a Western engagement party. Traditionally, this ceremony marks the official request asking the bride’s family her hand for marriage by the groom’s family. Families exchange gifts and bless the couple before they embark on their new life together.


How is an engagement ceremony held in India?


In India, engagement ceremonies are uniform across most ethnicities across the country however differing only in nuances and details of the rituals.


In some customs, families get prepared Lagna Patrika (wedding letter), which is a formal declaration and promise to each other to perform the wedding in the future. While in some it marks the formal ceremony where the official date of the wedding date is determined by the two families.


While in some cultures. engagement precedes the wedding by months or even a year whereas others it is held a day or two before the wedding ceremony.


According to few customs, the father of the groom requests for the father of the bride for the bride’s hand in marriage with his son. Having confirmed and mutually agreed they make a promise for the marriage, which is called Wagdaan. The bride’s father then tells her that he will plan the wedding ceremony at an appropriate date in the future. The couple then exchange rings and the ceremony ends with best wishes and blessings from all the attendees.


Exchange of rings is not mandatory or common in all weddings across the country, but it does involve the ritual of the formal announcement of the impending matrimony.


In Punjabi weddings, the engagement function usually takes place only after the Roka ceremony.


When are the rings exchanged between the bride and groom?


Exchange of rings between the bride and groom is a newer tradition that has found universal acceptance in all the regions and faith in India. Although rings were an intrinsic part of the wedding jewelry since time immemorial, a ring exchange ceremony could be called an influence from the West.  After all the traditional rituals and customs of the engagement ceremony are over, the boy and girl exchange rings. This marks the official union of the couple in the presence of their family members and close friends.


What are the Engagement Ceremony Customs?


It is customary for the bride’s and the groom’s families to exchange traditional gifts, sweets, fruits, dry fruits, and other items during the engagement ceremony. The bride’s and groom’s families give each other gifts and goodies such as jewelry, cash, sweets, food items to each other. The bride is also presented with jewelry from her to-be mother-in-law. The sweets and fruits as gifts symbolizes that the giver wishes pomp, wellness and health for the receiver. Such gifting traditions make the engagement a gala and a joyous affair. Another interesting thing to note is these gifts are offered in immaculately wrapped hand woven baskets.


There are various terms associated with the engagement ceremony in India. It can be called Mangni and Sagai in northern regions while in the south Nischayam in Telugu and Malayalee cultures and Nischitartham Tamil weddings. In Bengali marriages it is called Ashirbaad while  Kurmai or Shagan among Punjabis. In Maharashtra, the engagement is known as Sakhar Puda, while Gujaratis refer to it as Gol Dhana or Gor Dhana. Also, it is known as Mudha Tika in Marwari communities and Tilak in Rajputs of Rajasthan. While there are few states like Assam that do not have a designated engagement ceremony, but now it is a recent addition.


The engagement ceremony has different names across the country and so are the rituals. But, the essence remains the same - it is basically the first ceremony that brings the two families of the bride and the groom together to confirm marriage between the boy and the girl. Plus, it offers a fine glimpse of the traditions and celebratory appeal of Hindu wedding traditions.