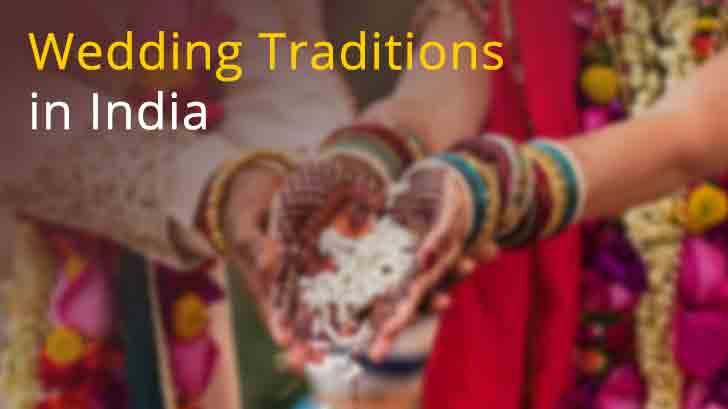 Indian weddings are traditionally a multi-day affair and a cultural beauty like you have never seen. An Indian Wedding traditional way is a schedule of many intricate rituals and ceremonies that takes place for days and even weeks spanning before and after the wedding.  Rituals such as the Haldi or Mehendi, or the presenting of garlands to the guests of honors, the showering of flowers, petals and rice for good luck or event the colors that are used for decor as well as the outfits, all have some or the other traditional significances and meaning.


Typically, an Indian wedding is divided into three parts - pre-wedding, main, and post-wedding. The pre-wedding rituals include all the preparations and a party a day or two before the wedding where the two families of the bride and groom can meet each other and have fun with dance and music.


Here’s an insight into the outline of the Hindu wedding rituals and wedding customs done the traditional way.


Engagement Ceremony: One of the most important pre-wedding ceremonies, the event is mostly an intimate one with close relatives and friends from both bride and groom’s side. Usually, this event is organized a few months before the wedding where the both families vuch for the virtues of their child and make a formal announcement of the wedding of their children in  front of the guests.


Mauli: Around 15 days prior to the wedding, the mauli (a red string) is tied to both the bride and groom and their respective family members as a good luck for a safe wedding day.


Mehendi: Traditionally, an Indian gets her hands and feet covered with beautiful Mehendi or henna designs applied by her female friends, cousin sisters and aunts. In some states even the groom gets mehendi applied on his hands. This beautiful event is usually held in the evening amidst a lot of dancing and music by the family and friends. While the bride sits for hours to get the Mehendi art done, other female guests also get Mehendi done on their hands.


Sangeet: Traditionally, Sangeet used to be a women only event where all the female friends and female family members of the bride would gather for the event and sing traditional wedding songs and dance to the tunes of traditional musical instruments such as dholak. Things have changed quite a lot now Sangeets are a more themed and well choreographed event where not just females but members from both the bride and groom’s side come together at a common venue to celebrate this fun event.


Tilak/Sagan Ceremony: Tilak Ceremony is reckoned as the first step to the bond between the two families. On this auspicious event, the male members of the bride’s family visit the groom’s home to put kumkum or vermilion on his forehead, which is called tilak.


Haldi Ceremony: The auspicious Haldi Ceremony is held on the morning of the wedding day. One can find variants of this auspicious event in different parts of the country. In this tradition both sides of the family at their respective places apply a paste of turmeric, oil, and water over the skin of the bride and groom. The mixture is believed to play a role in blessing the couple as well as in nourishing and soothing the skin before the wedding.


Kanyadaan: The bride’s parents give their daughter away to the groom in Kanyadaan. According to Hindu tradition, the parents do not eat anything before the wedding to remain pure for the occasion.


Saat Phera or Mangal Phera and Saptapadi: Another traditional Indian wedding ritual is the Saptapadi. This when the bride and groom walk around the sacred fire for seven or four times depending on which region the wedding is being solemnized. The bride’s saree is tied to the groom’s scarf to symbolize the union of two souls. As the couple circle the fire they also say the marriage vows after the priest or pandit who officiates the wedding. As the ceremony ends, the groom puts sindoor (vermilion) on his bride’s parting of the hair - a married Hindu woman’s mark of marital being. As per Hindu astrological norms, applying sindoor is supposed to ward off evil omens and usher in prosperity in a couple's life.


Mangalsutra: After the vows comes the Hindu wedding tradition where the groom ties Mangalsutra around the bride’s neck instead of exchanging rings. The mangalsutra is tied to symbolize the bonding of the two souls for eternity. This gold and black beaded necklace with a pendant is worn by the bride to let others know that she’s married.


Vidaai and Griha Pravesh: These are both post-wedding rituals. In the Vidaai ceremony, the bride says goodbye to her parents and family before leaving for her husband’s home. It is common for the bride’s to throw raw rice backwards towards her parents home as she leaves, symbolizing her gratitude to them for providing and taking care of her for so long and wishing them prosperity.


After the couple reaches the groom's place, the bride’s mother-in-law welcomes the couple with an aarti. She also places a rice filled vessel at the entrance, which the bride is supposed to spill the rice by nudging it with her right foot to signify that she brings wealth and prosperity to her new home.


And an Indian wedding traditional way may seem complex and a bit overwhelming if you are not familiar with the customs and the timeline. But one thing is for sure that the weddings in this part of the world are focused on love and the tying of not just two souls but two families together. It’s a celebration that is remembered by those who attend for a long time to come.