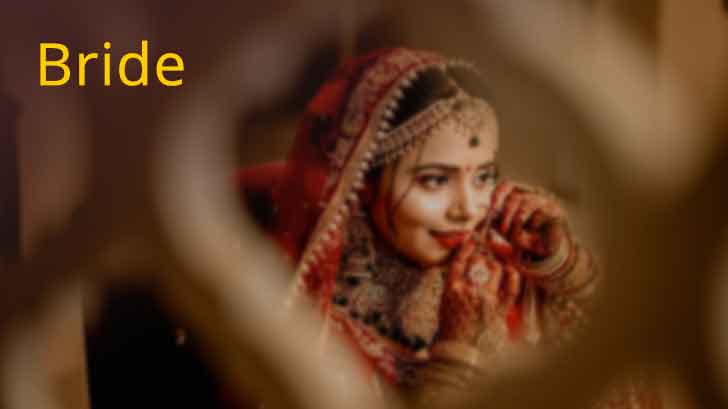 A bride in Indian weddings is typically called a ‘Dulhan’. While Dulhan is a common term in most North Indian weddings, a bride is known differently in other parts of India. For instance, she is called a manamagal in Tamil culture, Vadhu in Kannada, Nababadhu in Bengali, Koina in the Assamese household, Sokkele in Konkani, Vadhuvu in Telugu and many more.

Whatever the bride may be referred to as, but in Hindu traditions, a bride is considered to be the representation of Goddess Lakshmi - the goddess of wealth and beauty. That’s the reason why several rituals hold different symbolic meanings linked to the bride. There are many rituals and customs in Hindu weddings that hold importance particularly for the bride. While some are formal ceremonies, others are reasons to have fun just like the Mehendi ceremony. These rituals are common in most Indian weddings where a bride is concerned. During the wedding, the bride receives a lot of blessings from everyone, especially all married women of the household for good luck.

Want to know about your married life? "Talk to an Astrologer for marriage & kundli consultation

The Mehendi ceremony is organized by the bride’s family where the bride’s hands and feet are tattooed with intricate and ornate designs using henna. The Mehendi ceremony usually takes place one day before the wedding, as it can take hours for the henna to leave the desired dark color on the skin. In Indian weddings, it’s believed that the darker the shade of the Mehendi on the bride’s hands, the more loving her husband would be. Sounds interesting! Traditionally, the event is only attended by the bride’s family members and her close female friends.

The Bride’s Entry To The Wedding Mandap

An Indian wedding is not just a mere ceremony, it’s an extravaganza that envelopes much more than the conventional rituals. And this instance can be witnessed when the dulhan makes her grand entry to the wedding hall. Dressed in all her fineries, the bride is usually led to the ceremony by either her brothers, cousins, and friends. However, at some weddings like in south Indian marriages, it’s the maternal uncles and aunts who accompany the bride to the ceremony.

During the kanyadaan ceremony, the bride’s father puts his daughter’s hands into the groom’s hands as a gesture of officially giving her away. According to Hindu traditions, kanyadaan is considered one of the biggest daan (donation) anyone can do in their lifetime.

Vidaai (also known as Bidai or Bidaai) is another important ritual for a Dulhan. The word vidaai means farewell. Yes, you guessed that right! This ceremony symbolizes the final stage of the wedding where the bride bids farewell to her parents and leaves for her husband’s home. A sentimental outburst just like any other wedding around the world. But, before leaving, the girl throws a handful of rice over her shoulders towards her parents’ home as a symbolic gesture of repaying back her parents for caring and raising her for so long. She wishes for their prosperity and expresses her gratitude toward them.

This grihapravesha ceremony or homecoming is done to welcome the new bride to her husband’s home for the first time after marriage. The names of the ceremony may vary according to different states and cultures. Moreover, the customs of this ceremony differ too. But, it’s typically the mother of the groom who welcomes her daughter-in-law with an aarti pooja. The bride needs to push a Kalash (pot) filled with rice to the ground using her right leg at the main threshold of the house before entering. In many weddings, the bride has to step into a flat dish with Alta (a common Indian bright red liquid dye used to adorn palms and feet) and walk into her new home leaving behind auspicious red footprints, which symbolizes the arrival of the Goddess Lakshmi.

For a newly married bride, the sindoor (vermilion) on her forehead symbolizes her status as a married woman. Another crucial accessory that holds deep meaning and signifies a bride’s marital status is the mangalsutra - a chain of black and gold beads. It’s the groom who places the mangalsutra on the bride’s neck at the wedding ceremony. As a tradition, Goddess Lakshmi, the god of wealth, fortune and prosperity is invoked in the mangalsutra.

These are what a bride experiences before, during and after the wedding. Now further read what a bride looks like on the wedding day. Furthermore, what gifts you as an invited guest can present the bride with at her wedding.

How Does An Indian Bride Look On Her Wedding Day

With any Indian Dulhan, one thing is for sure, they look their resplendent best! Typically, Indian brides prefer shades of red for their special day. In Hindu culture, the color red is considered auspicious and it symbolizes prosperity and fertility. But this is not the case in all Indian marriages as brides also prefer colors and style according to their personal tastes. Modern brides also have been wearing other colors such as blue, green, gold, tangerine, and coral. Depending on different states, communities and regional preferences, a bride wears a lehenga, a saree or a salwar suit. These colorful bridal attires are embroidered with intricate gold designs and are heavily embellished. The bride completes her look with a headscarf, heavy jewelry, beautiful hairdo, and make-up. Beyond this, the bride may change into a different attire at her reception that is usually held after the wedding ceremony.

What Wedding Gift Should You Carry For The Indian Bride

Of course, brides along with the bridegroom are the center of attention at any wedding. And, to wish them and express your love for the couple you have to carry the right gifts for them. Let’s talk about what wedding gifts should be considered for the Indian bride. With changing times, the prevalence and utility of certain things also change. Keeping this in mind, be smart with your choice and decide on the wedding gift ideas for an Indian bride. These can be anything beautiful and meaningful at the same time. For instance, from jewelry sets or even jewelry boxes to hold them to make-up kits, from shoes to spa sessions, from perfumes to ethnic wear like saree/suit or silver utensils for the pooja, can win the bride’s heart.

You wouldn’t agree more, an Indian Dulhan is the cynosure of all eyes on her D-Day. From her finest wedding trousseau to all the rituals and customs she performs throughout the marriage process, she captures the attention of everyone. Some events are specially meant for the bride and hold hidden meanings. Witness all these and more of an Indian bride at a typical Indian wedding.