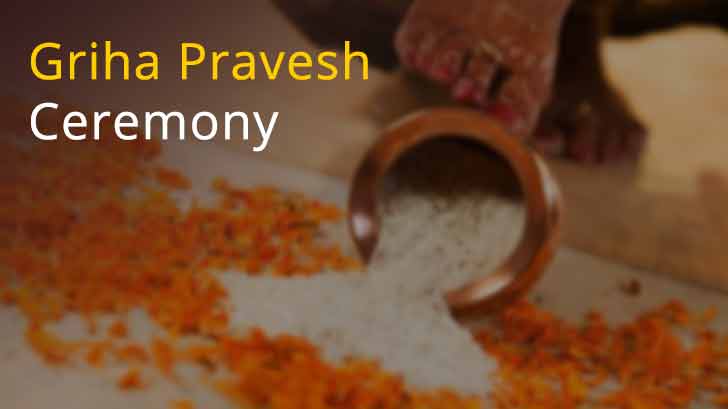 Griha Pravesh Ceremony is an integral part of the post wedding rituals, when the bride enters her husband’s home for the first time after the wedding. The merriment doesn’t just stop with the bride’s departure to her husband’s home with the Vidaai ceremony. As the Vidaai ceremony is quite emotional and stressful for the bride, the groom’s family ensures that it makes the bride feel welcomed by continuing the celebrations with joy and enthusiasm with the Griha Pravesh ceremony. In this the groom’s mother welcomes the newly wed couple to the home.

The Griha Pravesh Ceremony depicts that the family of the groom has welcomed the bride from the bottom of their heart and accepted her as an integral part of their family.

The term Griha Pravesh may be referred to by different names according to different regions that follow this custom. Moreover, different states follow different customs.

How Does The Griha Pravesh Ceremony Proceed?

On the auspicious occasion of Griha Pravesh Ceremony, the ladies from the groom’s household stand near the entrance of the home or the living room. At the threshold, the mother-in-law of the bride welcomes the couple with arti and applies a tilak to both the bride and groom, after which the couple seeks blessing from the elders present.

A Kalash or jar filled with rice is kept at the entrance, which the bride pushes and topples it with her right foot while entering the home. She also has to enter the home first using her right leg first, as it is considered propitious. While the rice ritual is followed by the majority of states in India, in some parts of India, the bride may even be made to dip her feet in water containing vermillion powder or red kumkum or Alta. This way she will leave behind auspicious red footprints across the home as she walks signifying that the Goddess of Wealth and Prosperity - Lakshmi has entered the home, bringing success and prosperity to the home signifying the entrance of goddess Lakshmi. At weddings such as the Bengali Weddings, when the newlywed couple enters the house after the wedding, the bride is presented with the Shakha Pola bangles - the traditional red and ivory bangles as well as a metal bangle called Loha.

Significance of the Kalash Rice Ritual:

In Hindu custom, kalash is a very important vessel or pooja instrument that is used in almost all rituals. The woman or a bride is considered to be an incarnation of Goddess of wealth and prosperity Lakshmi. And hence, the bride pushing the rice kalash inside the house as she enters symbolizes her letting in prosperity, wealth and good luck within the household.

Besides, rice is an ingredient that is considered to be very auspicious in Hindu tradition and used in almost all holy ceremonies. The kalash filled with rice is a symbol of the abundance of wealth that the bride is expected to bring into the house.

What more to expect in a Griha Pravesh Ceremony?

Yes, there’s some fun banter involved in this ceremony. While the whole family of the groom are involved in giving the bride a warm welcome, the younger sister-in-law of the bride doesn’t let the newly wed couple enter the house (all in a light-hearted manner), which is known as the Dwar Rokai Ceremony (mostly seen in North Indian weddings). She asks her brother for some precious gifts or cash and only on receiving what she has asked for does she let them in. Of course, the brother has to fulfill her demands to gain entry to the house.

In certain weddings such as the weddings of Gujarat, various games follow after the Griha Pravesh ceremony. A game called Aeki-Beki is played wherein the couple has to find the ring kept in a vessel containing water, milk, coins and vermilion. The one who finds the ring first is said to be the one who will rule the roost.

In northern parts of India as well as in Gujarati and Rajput culture, after the Griha Pravesh, another important ritual that follows immediately is the ‘Mooh dikhai ki rasam’ (the ceremony of showing the bride's face). It’s basically the introduction of the bride to her new family.

This post-wedding Griha Pravesh ceremony is hence the medium when the bride puts her first step at her in-laws’ or her husband’s home and starts a new chapter of married life.