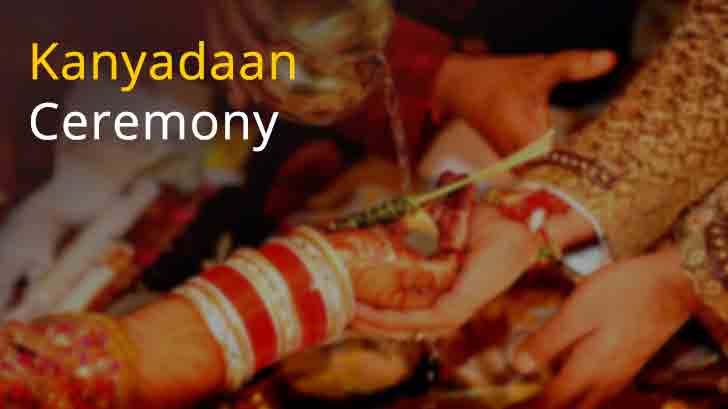 The word Kanyadaan is formulated by appending two words that are ‘kanya’ meaning girl and ‘daan’ meaning donation. So it’s exactly the act of giving a daughter by her parents to the groom. It’s a symbolic marriage ritual in Hindu tradition for the bride’s parents and the to-be-wedded couple. This ritual has a deep significant meaning as well. Here the father is entrusting another man and hoping that he will take care of his daughter like he used to. It’s an extremely sentimental ritual for Indian brides and her parents. This ritual also exemplifies the sacrifice of the father and the mother to commence the new phase of their daughter and ensure her prosperous and happy future.

No matter what, a daughter is a prized possession of any father and they can never stop loving them.

It exemplifies the father-daughter bond and thus is a tradition that invokes very deep-seated emotions and sentiments. It is the very ceremony where the father announces that now I give my daughter to you (the groom) and that you become the man who has her now.

What is the process of a Kanyadaan Ritual?

The Kanyadaan ceremony commences right after the Jai Mala or Varmala Ceremony in front of the ceremonial fire at the mandap.

The father of the bride takes his daughter's right hand and places it on the groom's right hand, and requests him to accept his daughter as his equal partner. The couple’s hands are tied by a sacred thread, then flowers, coconut, rice, betel nuts, and betel leaves are placed on top of their hands. Some customs also include placing gold coins, cash money, and other fruits on their hands. This joining of hands together of the bride and groom is known as “Hastamelap”. After that, the bride’s father and in some cases both the parents place their hands on the top of the couple’s hands. Now sacred water such as Gangajal (water from the holy river the Ganges) or a mixture of Gangajal and milk is poured down on the hands while the priest chants Kanyadaan Mantras.

The groom is also supposed to place his free hand on the bride’s right shoulder, which symbolizes him taking responsibility for her wellbeing, happiness, and fulfilling her needs.

In some Indian weddings, there is a curtain between the couple to restrict them from seeing each other until the Kanyadaan wedding ceremony ritual is over. The veil is lifted after Kanyadaaan and the bride and the groom can then see each other for the first time on the day of the wedding.

At the end of this ritual, the groom and the bride proceed to take the Pheras (circling of the holy fire together) and uttering the Saptapadi and customary wedding vows.

What is the significance of Kanyadaan Ritual?

In Hindu wedding tradition, the bride represents a form of Goddess Lakshmi and the groom of her consort Lord Narayana or Vishnu who is the preserver. The parents are assisting the union of the two “divine souls” while everyone bears witness. This wedding ritual is performed as a means of proving consent from the parents of the bride before continuing with the wedding ceremony. It is said that a Hindu father has to give away his most precious possession, his daughter, in order to receive good fortune and great prosperity for her matrimonial future.

The kanyadaan ceremony signifies both the acceptance of the bride’s father and his official approval to give his daughter away to the groom.

As per the Manu Smriti text, Kanyadaan is considered the biggest daan or noblest donation of all. Perhaps the biggest offering a man can give to God (Lord Vishnu). And blessed are those who have a girl child and get the opportunity to perform Kanyaddan for their daughters.

Here, it is important to understand the mutual sentimental feeling the father-daughter relationship holds. The father has to go through this entire ceremony in a  ritualistic manner to let go of his daughter. One can only imagine how heavy a heart a father must be feeling? A whirlwind of emotions at such a sensitive time.

This ritual can be seen equivalent to other cultures such as Christian and Jewish weddings where the father walks down the aisle along with his daughter leading the bride to the altar and gives her away to the groom.

All in all, Kanyadaan as a ritual is one of the most sacred wedding rituals without which no Hindu wedding is complete. Now that you have learned about the sacred kanyadaan wedding ceremony, rest assured that this will be one of the most emotional moments you have ever witnessed at a wedding.