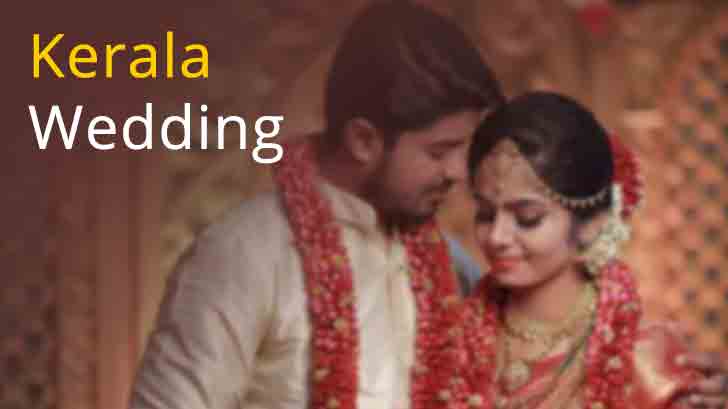 India’s rich cultural and religious diversity is not unknown. You’d agree there are different ways of doing things all across the country. And when it comes to marriage, there is a myriad of different customs prevalent all over India. And one such place where you’ll witness a unique wedding is in Kerala. An already tourist favorite destination of the country blessed with splendid natural beauty, imagine what the weddings would look like against those stunning backwaters and verdant backdrops.


Kerala is a beautiful amalgamation of Hindu weddings, Christian weddings and Muslims weddings. Each matrimony has some roots that are in sync with the traditions of the state. And each of them are bound to touch your heart.


Here, let’s talk about the prominent Kerala Nair Hindu wedding, which is similar to other Hindu weddings in the state. The wedding happens in the morning just after sunrise as the time is considered to be auspicious, unlike weddings in North India that are solemnized after sundown. They are usually just a day-long affair. Short, simple yet extravagant! Moreover, there is no loud music or dancing and you’ll enjoy the orderly and peaceful atmosphere unlike many weddings in India. While some of the rituals are not new to Hindu wedding traditions, some are just so unique that you’ll be amazed.


Let’s dive deep into how a wedding in Kerala proceeds.


In this ritual, the kundlis or the astrological horoscopes of the bride and the groom are matched to see their viability. After the kundlis are read, then a Muhurath, which is an auspicious and holy date for the wedding is fixed.


This is the engagement ceremony in a Malayali wedding. Families of both sides make an official announcement of the wedding in front of all the people. Once the rings are exchanged, both the families exchange gifts with each other.


The bridal mehendi in a Kerala wedding is similar to other mehendi ceremonies across India. The mehendi ceremony is organized at the bride’s place. Usually it is the aunts of the bride who draw henna patterns on her hands and legs, a henna artist may take up the job after some time. Meanwhile, the other ladies of the household dance, sing and enjoy the ceremony.


This main ceremony of a Kerala Nair wedding starts with the bride’s family giving a ceremonial welcome to the groom’s family. The bride’s father washes the feet of the groom and escorts him to the mandap. The bride then walks towards the mandap accompanied by her aunts. Once the bride is seated, the family priest initiates the ceremony with his holy chants. The couple then takes a few rounds around the holy fire. At the end of it, the father of the bride hands over the mangalsutra to the groom to be tied around the bride’s neck. This signifies the kanyadaan ritual when the father hands her daughter to her new husband. The tying of the mangalsutra is known as ‘Thalikettu’ in traditional Nair weddings.


In this beautiful ceremony, the groom gives his new wife a saree. The gesture signifies that he would forever take care of her with utmost sincerity and provide for her throughout her life. A gift seals the deal!


One thing that you would never want to miss in a typical Nair wedding is their wedding feast also called sadhya. This traditional scrumptious feast has as many as 25 varieties of delicious native dishes that are usually served in a banana leaf. Now that’s worth accomplishing! The spread consists of rice, several side dishes, savories, pickles, and desserts. A treat to the taste buds!


Here, the bride enters her new house with her husband at a pre-ordained auspicious time. The groom’s mother welcomes the newlyweds with lit oil lamps to shed any negative energy that may surround the bride. The welcoming ceremony, considered one of the auspicious Kerala wedding ceremonies, is known as Kudivep.


The unique wedding attire that a typical bride in Kerala wears is known as ‘Kasavu’. The white saree with golden borders surely draws your attention! Although many brides are opting for other colors too. Gold is also an integral part of the bridal trousseau. The brides are quite famous for their love for bling, although some forego it and keep it simple. You’ll typically see a Kerala Hind bride wearing traditional jewelry like Kasumala - a long necklace made by assembling gold coins. The next piece of jewelry is a typically green-colored necklace in mango design called the Palakka Mothiram. Another common piece of jewelry is the belt that is tied around the waist called Oddiyanam. Jhukis is another piece of a stunning piece of the ornament then there is the stunning gold choker called Elakkathali.


The traditional wedding attire of the groom of a Kerala Hindu wedding screams appreciation for the sober color white and gold. The groom wears a white mundu (Lungi) with a gold border, a matching scarf called Melmundu paired with a plain white shirt or a kurta. But with changing times grooms have also been pulling off sherwanis, formal suits and even kurta pyjamas.