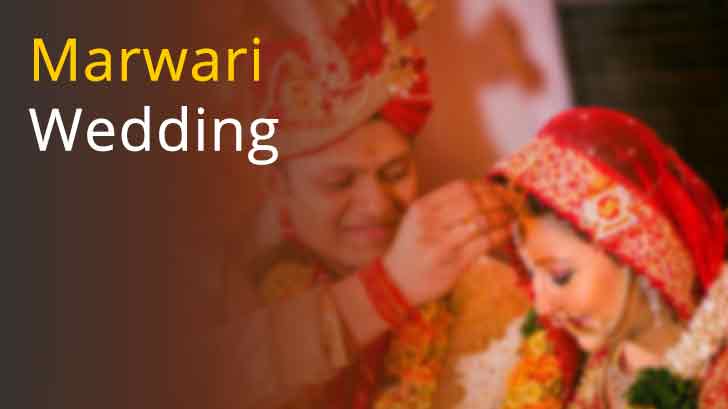 A Marwari Wedding like most Indian weddings is celebrated with a lot of enthusiasm and exuberance. They are quite grand and colorful that will leave no stone unturned to whoever attends it. Quite pompous that way!


Marwaris trace their roots to the Marwar region of Rajasthan but are now scattered in different regions of India. Authentic Marwari weddings have roots in the ancient traditions of Vedas. The Marwari wedding customs and rituals go on for seven days at length. Their weddings are not just an elaborative but glorious, colorful, and fun experience.


Let’s have a detailed look at some of the most important traditional rituals and customs that are indispensable to a Marwari wedding.

Sagai - The gala celebrations of the Marwari wedding ceremony begins with the ‘Sagai’ or the engagement ceremony. It is the first ritual step in bringing the bride and groom together. Organized by the groom’s family, on this occasion, a tikka is applied on the groom’s forehead who also receives gifts like clothes, sweets, etc. from the bride’s family.


Ganapati Sthapana and Griha Shanti - A few days before the wedding, a ‘havan’ (a ritual fire on a sacred pedestal) is organized at both bride and groom’s homes to offer prayers to Lord Ganesha for peace and prosperity throughout the wedding, and ask his blessings for union of the couple. An idol of Ganesh is installed at the respective homes. And, offerings are made to the fire God - Agni so that he may carry forward the prayers. Along with Ganapati Sthapana, another holy pooja or ritual of Griha Shanti is performed by the priest at the two respective places. This ritual is aimed at appeasing the gods to bless the two families and the wedding.


Sangeet or Mehfil: Held 2-3 days before the wedding, this Marwari function called Mehfil is an evening of festivities, singing and dancing. Men and women get together separately and enjoy the fun event. The men are not allowed in the mehfil of the ladies and vice versa for women. Everyone wears stunning attires and dances to the tunes of traditional Rajasthani or Marwari songs.


Pithi Dastoor or Baan Ceremony - One of the most important pre-wedding rituals of a Marwari wedding, Pithi Dastoor is basically the haldi function like in most Indian weddings. This function involves application of turmeric (haldi or baan) and sandalwood paste on the bride and groom by their family members. According to Marwari traditions, the bride and groom cannot go out of their homes from this day until their wedding ceremony is over.


Mahira Dastoor or Bhaat Dastoor - This important pre-wedding ceremony is held individually at the bride and groom’s house. Mama (maternal uncle) holds a very important role in Marwari weddings!. The respective uncles are invited for a traditional meal hosted by the bride and groom’s mothers, and they bring an array of gifts and blessings for his niece and nephew. The bride’s mama gifts her the bridal dress and jewelry while the groom’s uncle gives him the wedding suit and ornaments. This ritual signifies the involvement of a woman’s family at important family events like the wedding of their children.


Mehendi - The bride gets intricate bridal henna design applied on her hands and feet. Other female relatives and friends from the bride and groom’s side attending the wedding also get henna tattoos.


Jaanev - This event involves a pooja where the groom is given a sacred thread by the presiding priest. Before wearing the holy thread, the groom has to pretend that he’s leaving the material world to become a monk. His maternal uncles persuade him to lead a married life. With this ritual, the groom understands the institution of marriage and accepts the responsibilities of married life.


Palla Dastoor - A host of close relatives of the groom visit the bride’s house carrying the bride’s wedding outfit, jewelry and gifts, which she is supposed to wear on her wedding. This ceremony is performed whether on the wedding day or a day before the wedding.


Nikasi - For nikaasi, the groom gets tied a turban called pagdi or safa with a sehra (veil) on top of it, which covers his face. Sehra is worn to protect him from evil eyes. Before the groom sets out for his wedding, his sister performs a small ritual called Vaag Gunthai where she ties a sacred thread to the horse that will carry the groom to his wedding venue.


Baraat - Baraat refers to the wedding procession of the bridegroom. The groom rides on a female horse (ghodi) and sets off for his wedding accompanied by his entourage of family and friends as well as a wedding band. Important male members of the baraat wear a colorful Marwari turban called safa.


Toran or Dwar Toran - Marwari tradition and culture believe in omens. The entrance of the bride’s house is elaborately decorated with toran. The groom has to hit the toran with a stick from a neem tree before entering the bride's place, which is believed to ward off any negative energy. Then the mother of the bride welcomes the groom at the doorstep with an aarti and tilak on his forehead.


Jaimala or Varmala: When the bride and groom meet they exchange flower garlands, which is Jaimala also Varmala. After the jaimala ritual, the couple is led to the mandap (altar).


Kanyadaan - In this common Indian wedding ritual, the father of the bride symbolically hands over his daughter to her husband and asks him to take her responsibility and care for her.  The bride also accepts the groom’s family and his surname as hers. The couple pledges to stay together and have each other’s backs all their life.


Pheras - The priests light the havan (holy fire) and chant the sacred marriage prayers. The bride and groom walk around the holy fire and they make vows to each other after every round (Phera). In a traditional Marwari wedding, only four pheras are performed with the groom leading the first three pheras and the bride leading the remaining last.


Ashwahrohan - The bride has to push a grinding stone forward seven times. This represents that the bride will face all challenges in her married life with conviction and courage. After this, the brother of the bride offers her a handful of puffed rice that the bride and the groom together has to offer to the fire. With this ritual the brother shares his happiness and wishes prosperity to the couple.


Vamang Sthapna and Seer Guthi (Sindoordaan) - After the completion of the pheras, the bride sits on the left side of her husband. As the human heart is on the left of the body, similarly it signifies that the groom is accepting and establishing his wife in his heart.


This is followed by the Sindurdaan ritual where the groom fills the parting of his bride’s hair with sindoor (vermilion powder). This is considered very auspicious and signifies the completion of the marriage. From now on the bride wears sindoor as a mark of her being a married woman.


Anjhala Bharaai - Then comes the ritual where before the newlywed couple leaves the mandap, the bride’s father-in-law drops a bag full of money on her lap. This ritual signifies welcoming the bride into her in-laws’ family and also making her aware of her duty and responsibility towards her new home.


Paharavani - In Paharavani custom, the bride’s family presents the groom with gifts and a tikka is applied on his forehead. A special silver utensil called Kachola is gifted to the groom’s father. The bride does a pooja where she breaks an earthen pot symbolizing a break from her paternal family and starts a new family with her husband.


Bidaai or Vidaai - This is an emotional ritual after the wedding ceremony gets over. The bride’s teary-eyed parents send off their daughter to her new home.


Bar Rukai - This is fun banter where the groom’s sister and female cousins extract gifts from the newly-wed couple in exchange to let them enter into the house on their arrival. The sisters do not allow them to enter unless presented with gifts.


Griha Pravesh or Vadhu Pravesh - This ceremony is when the bride enters her new home for the first time. The bride’s mother-in-law welcomes her by performing an aarti. Now the bride has to put her right foot over the threshold into a tray containing a solution of vermilion and milk. She then takes five steps with her colored feet to mark her footprints in the family. She also has to gently kick a pot of rice and coins, which symbolizes the fertility and riches that her presence brings to her new home.


Pagelagni - This ceremony is organized a day after the wedding where the bride meets and gets formally introduced to her husband’s relatives. The relatives bring gifts and money for the bride, and the elders bless her. This is also the occasion when the bride finally lifts her veil.

Wedding Reception - Marwari wedding receptions are usually held a day after the marriage ceremony. Traditional Marwari food is served at this function strictly consisting of a vegetarian menu and no alcohol is served.


Marwari brides usually wear a Ghagra or Lehenga Choli. Red is the prefered color, which is considered auspicious. In addition other colors like orange, pink, cream, maroon, gold are also preferred.


The jewelry for Marwari brides include Aad or Timaniyan (a chokher), Rakhdi (a gold ornament worn between the parting of her hair), chooda (bangles), baju (ornaments on her arms), Pajeb (anklets), and Bicheya (toe ring).