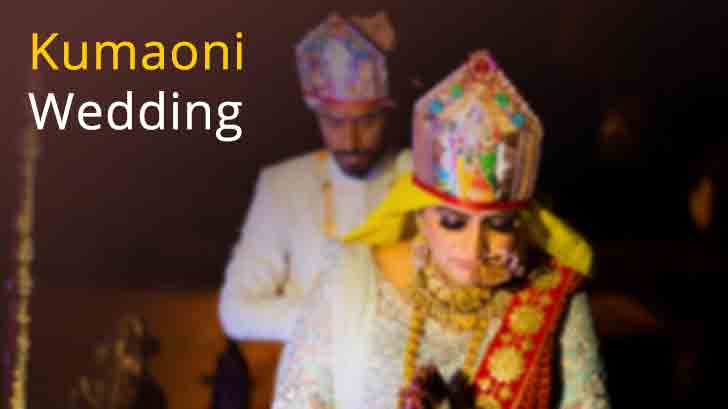 Many of you probably are not aware of the Kumaoni weddings. Just like the natural landscape of their region in the Himalayas that is full of scenic beauty comprising hills and mountains, verdant foliage, and pleasant weather, the Kumaoni weddings too are a treat to watch. Their weddings are a very simple affair, however, their rituals before, during, and after the wedding as well as the religious rites are quite intricate.


Kuamaonis favor their long followed customs and rituals and of them the matching of horoscopes is one the most crucial factors to analyze the match between the boy and the girl before the marriage is fixed. Moreover, there are rituals that are unique to Kumaoni weddings such as Duliarghay, Suwal Pathai among others.


So, without further ado, let’s discover more about the unique and delightful wedding traditions of the Kumanoni people.


Engagement - Just like the other Hindu weddings, Kumaoni weddings too start with an engagement ceremony. Their engagement is quite unique from the rest as it’s the fathers of the boy and the girl who exchange rings instead of the bride and groom.


Kundali Saamya Haige - In Kumaoni weddings, especially in arranged marriages, the boy and girl’s birth chart or horoscope are first matched before deciding on the marriage. This ritual of horoscope matching is called kundali saamya haige. After the kundali is matched, a marriage date is fixed


Mehendi - Next up is the Mehendi ceremony in which the bride gets henna or mehendi applied on her hands, arms, and feet before the wedding. Both the bride and groom’s family organize the Mehendi ceremony. All the female members of the two families get mehendi designs. The bride applies very intricate designs on her. Even the groom gets some henna designs decorated on his hands that are simple. It is said that the darker the henna color will turn out to be on the bride, the more loving her husband would be.


Ganesha Pooja - In Hindu beliefs, Lord Ganesha is known as the remover of obstacles, hence before starting any auspicious work the deity has to be worshipped. In this pooja, prayers are offered to the deity asking him to bless them and remove any potential obstacles that may come their way during the marriage rituals. After the Ganesh Pooja, the bride's parents observe a fast till the time the wedding rituals get over and she leaves for her husband’s home after the Vidaai ceremony.


Suwal Pathai - This ritual is unique to Kumaoni traditions, which is either done one day or three to five days before the main wedding ceremony. In this ceremony, the wheat dough is kneaded and rolled into circles like very thin flatbreads. It is then dried in the sun. Once dry, they are deep-fried like papadums and offered to the gods as Parasada (food offered to the deities).


Duliarghay - In Hindu weddings, the groom and the bride are treated as Goddess Vishnu and his consort Goddess Lakshmi. Therefore, he is worshipped by the father of the bride and the priest. The groom is made to stand on a special stool (chauki) at the courtyard of the bride’s house called Duliarghay and the bride’s father washes his son-in-law’s feet, applies tilak on his forehead, feeds him sweets and gives gifts such as clothes and money. This ceremony is done after the groom’s procession called baraat has arrived at the wedding venue.


Varmaala - After Duliarghay, the groom proceeds towards the center stage at the wedding altar also called a mandap. The bride joins him shortly after which the couple then exchange Varmaala also known as Jaimala and the crowd cheers for the two with claps.


Kanyadaan - Kanyadaan marks the first formal wedding ritual with the priest taking over and conducting all the holy rituals and ceremonies. Kanyadaan is an emotional ritual where the father of the bride officially hands her daughter away to the groom and in return asking the groom to take good care of her and love her. The word ‘kanya’ means girl and ‘daan’ means donation, and according to Hindu tradition, kanyadaan is the biggest donation ever that anyone does.


Vidaai - The Vidaai is the official farewell ceremony where the bride gives a very emotional goodbye to her parents and her family.


Welcome Of The Bride And Formal Introduction


Upon arrival at the groom’s house, the bride is welcomed by her mother-in-law or the groom’s elder sister. The new bride is formally introduced to all the members of the family and their relatives. She also briefed about her future duties and responsibilities. After all these ceremonies and rituals are completed, the bride goes to a water spring (called naula or dhara) carrying an urn of water or kalash on her head along with other female members of the family. She then immerses all the materials that were used in the pooja ceremonies in the water.


The Kumaoni bride wears a lehenga for her wedding. She compliments her look with gold and silver jewelry. Another unique jewelry for a Kumaoni bride is the large Nathuli (nose ring). For the groom, the attire consists of a dhoti-kurta, sherwani, or a formal suit.