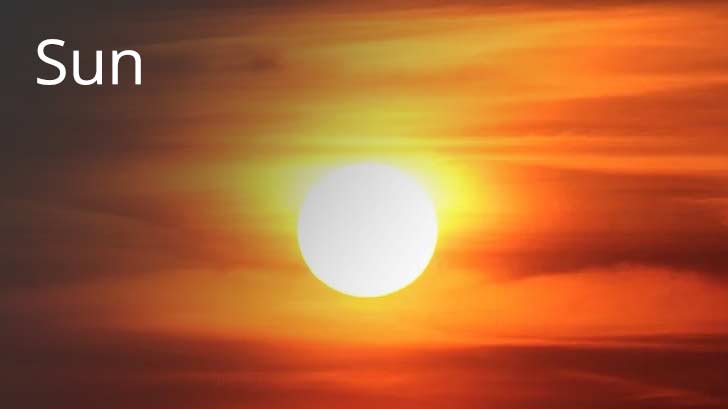 According to Vedic astrology, the planet Sun is called Surya Dev. It is worshipped as lord in various forms and religions, but there is another aspect to it. According to Vedic studies, the sun is in the form of a planet and it is considered superior among the other eight planets.

In this article we will learn about the planet Sun in detail. We will know what the importance of Surya is in Vedic astrology! Also, why is the Sun given importance from a scientific point of view? What is the mythological belief of this planet? Along with what is the sun mantra, a gemstone that signifies the Sun and its colour?
We will talk on these points in this article.

Sun as A Planet

If the Sun is seen from an astronomical point of view, it is located in the centre of the solar system. Due to which it is very close to the earth. It is because of the sun that life on earth has been progressing smoothly over time. In astronomy, it is the lowest after Venus and Mercury. Therefore it affects the earth the most. Sun is also given great importance in Vedic astrology. It is considered a cruel and also a benefitting planet depending on its placement and equation with zodiac signs. If these are effective then the time of the native changes.

Importance of Planet Sun in Astrology

Effect of Sun on Human Life

The Sun is our source of energy both geographically and physically. The sun is also responsible for the smooth running of nature. Because of which they affect us. According to astrology, the person whose horoscope has sun as an ascendant has a big and round face and the colour of eyes is like honey. The Sun represents the heart in the person's body. The Leo sign in the Kaal Purush horoscope indicates the heart. According to anatomy and astrology, the Sun represents the right eye of men and the left eye of women.

If the planet Sun is lit in the horoscope of a person, then the person achieves all the goals in his life. Amazing courage is seen inside the native. Its partner is talented and full of leadership ability. He does not lack respect for life. The native will be energetic, self-confident and optimistic. Due to this, there is an atmosphere of happiness, joy in the house. The native is kind. Life becomes royal. Such natives are very loyal towards their work and relationships. Sun being high and effective in the horoscope indicates a government job. The native attains a high position in life.

The native's horoscope in which the sun is afflicted or not effective has a profound effect on those natives. In such a situation the person becomes egoistic. Anger stays on the nose of the native. Due to which many of his works go wrong. The native gets depressed due to small things. Due to all this they are unable to trust anyone. Jealousy develops in their hearts making the person become ambitious as well as self-centred. Due to which their social reputation also decreases.

Mythological Belief of The Sun

The Sun is considered the king of the solar system. Along with this, Surya has been called a god in Hindu mythology. Sun is worshiped. According to the belief, Surya is the son of Maharishi Kashyapa and his mother is Aditi. Due to which the name of Surya is also Aditya. As you may have noticed. Some people in your house or in the neighborhood offer water to the sun every day and greet the sun. Because the natives do this to get its medical and spiritual benefits. According to the Hindu calendar, Sunday is dedicated to the Sun, which is considered an important day of the week.

Remedy - If the sun is weak or afflicted in the horoscope of the native, then the people should recite the heart aditya strata. Along with this, worshiping the sun will be beneficial for the native.