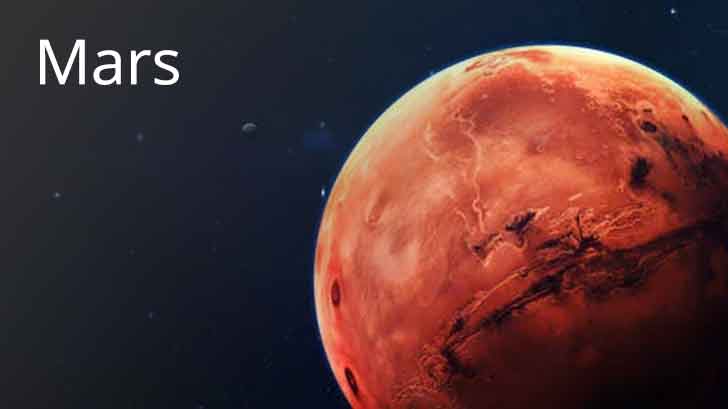 Mars as a red planet is considered to be a fearing planet in the solar system. Its distance from Earth is considerable, yet it directly affects our lives. Mars also has great importance in Vedic astrology. It is considered to be the factor of charge and energy. In this article, we will learn about Mars in detail. What is Mars? What is the astrological significance of Mars? What is the mythology behind planet Mars? How does Mars affect human life? You will get the answer to all these questions. Along with this, Mars mantras and information about remedies related to it and gemstones.

From a scientific point of view, Mars is the fourth planet in the solar system. Its colour is red and it is a terrestrial planet like Earth. Life is said to exist on this planet lately.

Now let's talk about the astrological aspect of Mars. It is considered a factor of might. Astrology mentions Mars as a cruel planet. But on the contrary, it creates harmony in one's life.

Mars has diff`erent importance in astrology. It is considered to be the lord of the zodiac signs Aries and Scorpio and a factor of might and energy. Hence, the people who have this planet in the benefic state are sharp and powerful. According to astrology, in what sense is the planet sitting in the Mars horoscope, it affects the native in the same way.

Mangal Defect is Formed Due to Mars

According to astrology, if Mars is not in the right position in the horoscope, like the first, fourth, seventh and twelfth house, Manglik Dosh is formed in the horoscope. It is said that due to this defect, the marriage of the native is delayed. It is believed that Manglik should marry Manglik only. It might cause failure in the life of the bride and groom. There are high chances of imbalance in marital life.

Effect of Mars on Human Life

Mars has the most effect on the body and nature of the person. According to astrology, if Mars is situated in the Ascendant house, then in such a situation, the person is likely to be rich and attractive. Such natives are expected to have a temper. When things do not get consistent, they get overwhelmed. These people have high chances of working in the Army and Security Department.

The people whose Mars is bright, those people do not hesitate to take the decision. Along with this, the energy remains in them to keep them active. Such people deal with all kinds of conflicts with ease. If your Mars is well then it is not only good for you but also for your family members. In such a situation, your siblings will grow well in their careers. But if you are suffering from Mars then you may have to face many problems. The weakening of Mars in the horoscope is not considered appropriate. In such a situation family life is not happy. There is also a possibility of an accident.

The Mythological Belief of Mars

According to Hindu belief, Mangal Devi is the son of Prithvi, but two mythological stories are found in connection with this incident. One is the relationship between Andhka Sur and Shiva Yudh and the other is Varaha form of Srihari. In one story, Mars is said to be the son of Shiva Prithvi. Both these stories of Vishnu and Prithvi are found in Hindu mythology. Only after this, Mars got the title of the planet and these solar were established in Mars.

Remedy - Tuesday's worship of Hanuman should be done with the peace of Mars. Donating red cloth also calms Mars. Worshipping for Mangal Dosh in Mangalnath temple located in Ujjain is considered most fruitful. It is believed that Shivalinga was established in this temple by Brahma.