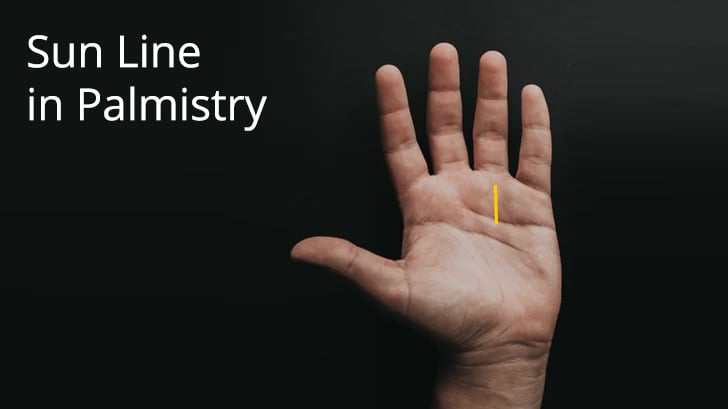 The Sunline is also called the Apollo line. It is considered as the sister line to the fate line. For those who do not have a fate line, this line compensates for it.
Location
The Sunline begins from the mount of the moon and runs till the base of the ring finger.
If it extends from the wrist to headline it shows the likelihood of fame at a young age.
If the Sun Line runs from headline to heart line according to the astrologers it shows luck between teenage and late ’30s.
If the Sunline is seen running between the heart line and ring finger base, the person is likely to attain fame in the ’40s till the end of life.
People who are inclined towards art, literature and are writers this line proves to be lucky for them. Such people can also be bestowed with good fortune and money without doing any work due to lottery or inherited wealth.
In some cases the Sunline is not visible halfway, in such a situation according to palmistry, most likely the person will get fame in the second half of his or her life.
Usually, the fate line is responsible for the share of fortune in one’s life but if it is absent in the person then the Sunline can help attain luck and prosperity.

Do You Have Any Favorite Valentine's Day Traditions?