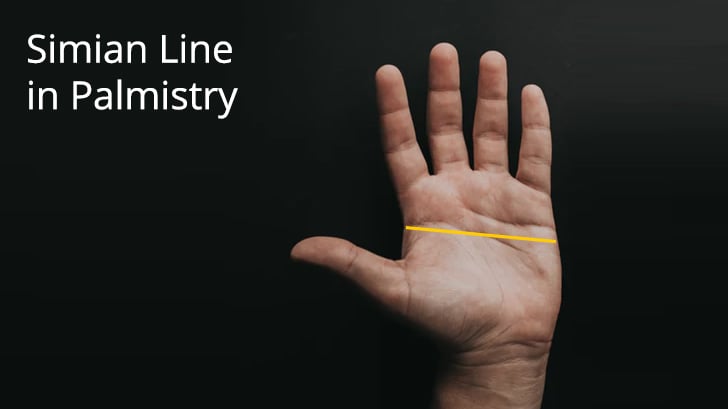 In palmistry, the Simian Line is a unique kind of line which is only present in a few hands. For some, this proves to be good luck while for some it cannot be taken as a good sign.
Location
Where the heart and the head line joins it makes a simian line.

The simian line depicts the blend of mental and emotional powers in a person. It also shows the probability of Down syndrome.
For men, this line predicts the creation of wealth and for the women, it indicates hard life, bad luck and divorce.
Positives of the Simian Line
It shows the person to be intelligent and stable. People who have this line on the palm are considered to be wise, smart and confident. Such people are known to have a clear-cut judgement in all aspects of life. It shows that such people have the power to make decisions as they are quick thinkers.
Negatives of the simian line
It shows that such people are likely to be short-tempered. They are known to be stubborn and self-centred.

Marriage Aspect According to the Simian Line

It shows the extreme side. If the person is devoted in love, he or she turns out to be a good partner and the opposite if they are not good lovers. Such people become suspicious and do not trust anyone.

Career prediction according to simian line

People with the simian line on the career front are loyal, honest and capable of performing really well. They are highly responsible. Such people are also good rule makers and followers. They are not the kinds who are dishonest at work and like opt for the right path in achieving success.
Women with the simian line are career-oriented, highly independent and capable.
Men with a simian line
If the simian line is on the left hand they are likely to possess a lot of wealth. If it is on the right hand then you are a good ruler. You are likely to be competent and powerful along with being affectionate.
Diseases one is likely to get if he or she has a simian line
Respiratory
Nervousness
Hypertension
High cholesterol
Hepatitis
Constipation
Urinary system diseases
Reproductory problems