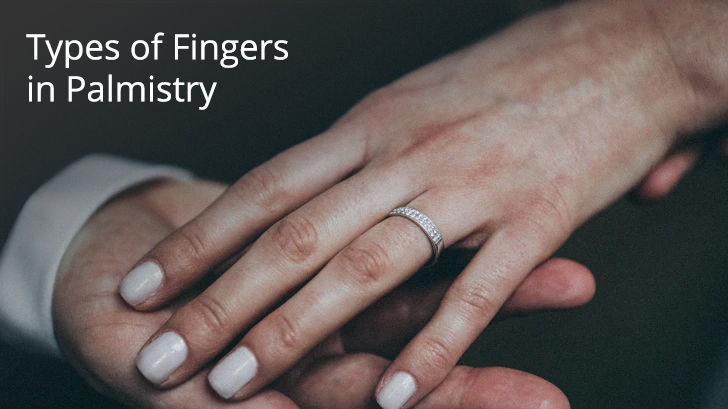 Types of Fingers in Palmistry

Palmistry is not just about the type of hand, it is also about every part of the hand which includes fingers, fingernails, lines etc.
Each finger has its feature and characteristic which it foretells about the person. Each finger is considered to symbolise a planet and possess attributes as the planet. The length also plays an important role in prediction. With the help of an expert astrologer, one can get a detailed prediction about life and also seek suggestions to make necessary changes for a stress-free life.
Just like types of hands play a vital role in prediction similarly, finger types also are considered important.

A person who has thick and solid thumb is considered to be blessed by his or her parents all the time. They are very practical when it comes to money and spending wisely. Such people are known for keeping up the promise and also living a simple life.
Flat, Thin and Uneven
People with this kind of thumb are opposite to the thick and solid ones. They are always impatient and do not like the slow and steady, planned kind of life. Such people are always on the lookout for enjoyment.
Long Thumb
People with long thumb are often blessed with the love of elders and academic excellence. They have good fortune, accelerated progress in life and also a strong body. When it comes to the career they are confident, aspire to a high-quality life and initiate the love for others without waiting for others to love them before.
Short Thumb
Those who have short thumbs need to trust themselves. They need to put in a lot of effort to prove themselves and excel. Such people are down to earth and slowly climb the ladder of success with hard work and patience. They are not the show-off kinds instead they are humble.

The index finger symbolises the desire of the person. Such people favour domination and power. They are too ambitious and always authoritative. If by chance the index finger matches to the length of the middle finger then the person is considered tough and difficult to move when it comes to choices, idea and achievements. Such people are lavish spenders and do not believe in saving.
Long index finger
Such people are inclined more towards holding power and controlling people. They are a big show-off and very socialising. Their life goals are high, and good at management. For the loved ones they are ready to spend with open arms.
Short index finger
Such people do not favour and are jealous of the ones who are better or superior to them in any way. The lovable but are likely to face difficulty at work due to their nature of not accepting any suggestion from the opponent.

The middle finger signifies the destiny of the person. Those who have long, straight and round fingers are considered to have a better destiny as compared to others. They are mostly blessed with a fruitful career, good wealth and healthy relationship. If the middle finger is short and thin then it shows that the person is hardworking. If it leans towards the ring finger that means the person is too protected about the family. On the other hand, if the finger is thick are very impatient and full of impulse.
Middle finger the longest
It indicates good health and wealth.
Short or equal to other fingers
It indicates that the person is impatient and lacks hope. He or she does not trust their work and are very scared when it comes to love matters as they do not want to lose the one they love.

It indicates the love and family aspect of human’s life. The fingers have various types and forms. If it tilts or leans towards the middle finger then it depicts his utmost dedication; for the family in all ways. If the finger bends towards the little finger then it shows fondness for children. If the finger matches the length of the middle finger then the person is likely to enjoy gambling of all kinds. They enjoy stock markets and other such related investments. If you have a long finger which is shorter than the middle one then you are a person who calculates everything step by step. Such people are planners and also good lovers.
On the other hand, people with short ring fingers are much more grounded. They are realistic and slow which leads to a slow increase in income. The love boat sails smoothly for them.

The little finger signifies children and the youth. If the finger is extremely short and bends then the person is likely to worry about their children's activity. It is also called the second thumb. It is considered to exhibit traits like wisdom, communication skills and art.
If the finger is shorter than the first knuckle of the ring finger shows a lack of success and fortune. Subsequently, long fingers show aggressiveness, good career, strength and a stress- free fortune.