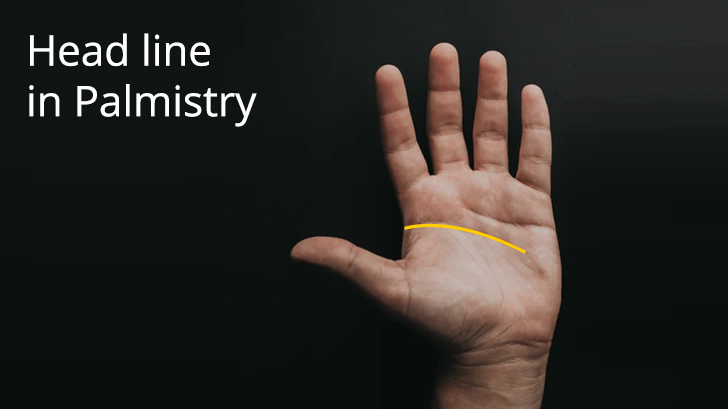 The headline is also known as the wisdom line. It is amongst the important lines that are considered in palmistry to predict one's present life events and analyse future prospects.
Meaning
It depicts the mental or intellectual ability of the person. It shows the power of the mind and its capabilities.
Location
It is located above the lifeline between the thumb and the index finger horizontally.

Long
People who have long headlines have a clear mind, they are good at thinking. They are considerate towards others. All those who have a long headline are likely to overthink which might not work out well for them all the time.
Medium
If the headline extends from the ring finger to medium length. Such people are considered to be smart and brilliant. They have good ability to do things.
Short
If the headline extends only till the middle finger then such people are slow to respond. They are careless and very impulsive. One should be careful to be more responsible and active to avoid trouble on both the personal and professional front.
Shape
Straight
People with a straight headline are likely to be very strong mentally and possess great analytical ability. They are practical and extremely dedicated to whatever they do. Subjects like maths, science and technology excel at it.
Curved
If a person has a curved headline then they are known to be tolerant, realistic when it comes to situations and have good interpersonal skills.
If the line goes downwards
The person is considered to be highly creative and artistic. Such people can be influenced by emotions and most time are also in trouble because of it.

If the Headline Crosses the Heart Line

If the cross at the end of the line then the person has a good common-sense. Unfortunately, he or she can have a lot of ups and downs in life.
Close to heart line at the end
If the headline is close to the heart line at the end then people with such a line are considered to have a good personal relationship. They are great helpers and also receive good help and support to overcome problems that come their way.
Headline joins lifeline
If the headline overlaps lifeline then such people are likely to be an introvert and thoughtful. The longer the overlap the more worried you will be.
Away from lifeline
If the headline is away from the lifeline then such people are considered to be bold, extrovert and successful. They are highly independent, full of self-respect. Unfortunately, they like to control their love due to which love life is usually not smooth.

The person with such a headline has a strong mental ability, and is double in character. Women turn out to be successful but are likely to face twists and turns in marriage.
Forked
Downward
With a downward fork in the headline, the person is expected to be a good thinker with a strong ability to solve problems. A person who knows how to manage his chaos.
Upward
People with this kind of headline have a strong ability, blessed with great talent. They are clever but also unrealistic in some spheres of life. A lot of them are known to dominate others.
Tassels
If you have tassels <cluster of lines> in the headline then you are likely to feel dizzy most of the time. You might experience constant headaches and have a weak heart.
Island
If there is an island on the headline then the person is predicted to have memory problems and frustration. If the island size is more than the more it is likely to increase.
Stars
If there is a star made out of multiple lines on the headline then it might increase the chances of getting hurt and also suffer from diseases like a constant headache. Fortunately, it also shows a great sign of wisdom.
Crossings
Crossings on the headline show that the person is shy, weak-willed and feared. It also shows high chances of a serious accident. Some might suffer from heart disease or coronary disease.
Chained
The chained pattern on the headline is very common. It shows a lack of concentration, deliberation and poor memory. The person might lack determination. If the chain appears throughout the headline then you are likely to get brain disease. If both the headline and lifeline are chained the person can easily be lured to any kind of thing.
Broken
If the head line is broken in two parts then the person can suffer from sudden illness and interruptions in career. If there are regular intervals in the line then the person is strong-minded but unfortunately cannot live harmoniously with the partner and can face break-up.