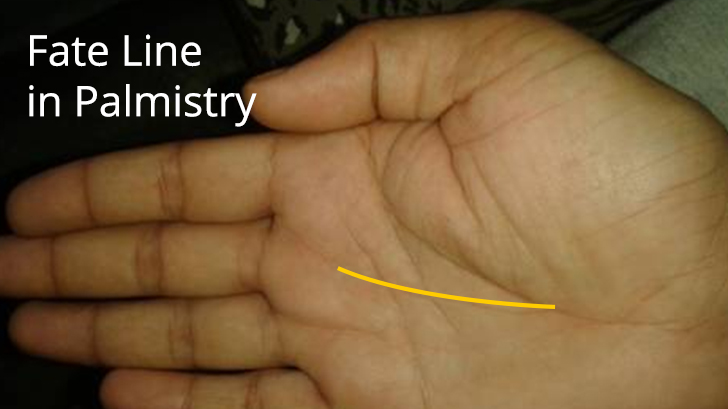 A fate line is considered to depict the frequency and quantity of luck and fortune in one’s life according to palmistry. It also shows the status of its presence and absence too. It is one of the most important lines like heart and headline.
Location
The fate line is a straight line that runs from the base of the palm to the top near the index or middle finger. It is also known as the Saturn line.

How Many Types Fate Line in Palmistry

No fate line
People who do not have a fate line does not mean they do not have any scope of luck or prosperity. The lines keep changing over time so is destiny. If by chance when you show your hand to the astrologer there is no fate line it indicates frequent changes in career and no permanent occupation.
Deep and long fate line
A deep and long fate line shows stability in a professional approach. It can mean that the person can or has started a new business or career.
Narrow fate line but thin in the middle
Such a line promises a smooth career during the young years of life but unfortunately, bad after middle age.
Shallow fate line
A shallow fate line predicts hardships accompanied by twists and turns at every step. Even if the person puts in all the hard work he or she is likely not to receive an achievement.
Narrow and unclear fate line
If the fate line is unclear then the destiny is likely to change to either good or bad. It is not stagnant also one destiny is not going to carry on for the entire life.

Intersection or association of fate line with other lines in palmistry

Do You Know Why Roses Are Special For Valentine's?

Do You Also Have The Sidharth and Kiara Factor? Will They Be Lucky?