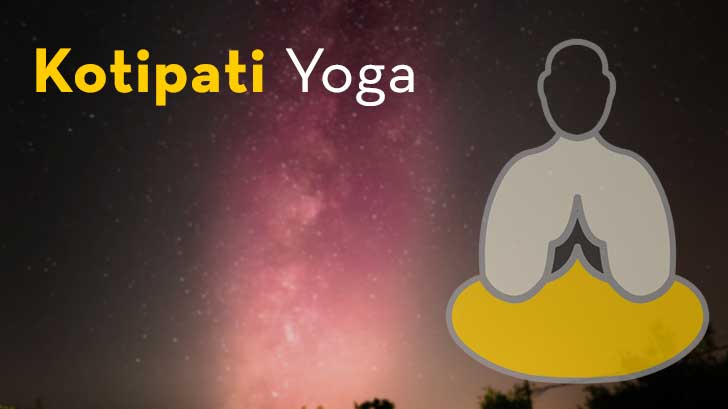 Don’t we all wish we had a big fortune and led a comfortable life, full of luxuries? Do you believe that money can solve your problems and end all your worries? If the answer is yes, this article on Kotipati Yoga is for you. Read on to learn about this amazing yoga.

Kotipati Yoga in Vedic astrology is one of the most significant yogas of all.  Natives with this yoga in their horoscope chart need never worry about their finances as they are blessed with a constant flow of money throughout their lives.

‘Koti’ in Kotipati Yoga comes from the Sanskrit word ‘koti’ which means ‘a crore’. By analogy, this yoga holds the ability to make you a millionaire.

How is Kotipati Yoga Formed?

The Kotipati Yoga is usually formed in the horoscope chart when the ascendant is ruled by a movable sign. Additionally, Venus, Saturn and Jupiter should be present in the Kendra for the proper formation of this yoga.

The planets play an important role in forming this yoga and giving it a positive edge. If any of these planets are afflicted by negative energies, this yoga will not be favourable. Also, the ruler of the ascendant should be very strong to reap all the benefits of Kotipati Yoga.

The power of Kotipati Yoga is simply incomparable. It has been observed that many successful people with this yoga have risen from a modest background, starting their careers from scratch. But they did reach the top of the ladder and earned enormous amounts of money, fame and fortune.

This shows the life-changing role this yoga can play in your life. Its strength and proven effectiveness make this yoga very important. Also, Kotipati Yoga is very rare and only extraordinary people are born with this yoga in their kundali.

The Kotipati Yoga is highly effective but rarely found in kundalis. This yoga will enhance your success even if you already have everything a good life can offer. Some of the ways in which this yoga impacts your life are:

In conclusion, a powerful Kotipati Yoga will help you in becoming rich and successful. This yoga will bring prosperity and good fortune, along with respect in society.

You will carve a path for yourself leading to fame and grandeur, if Kotipati Yoga is formed in your horoscope chart.