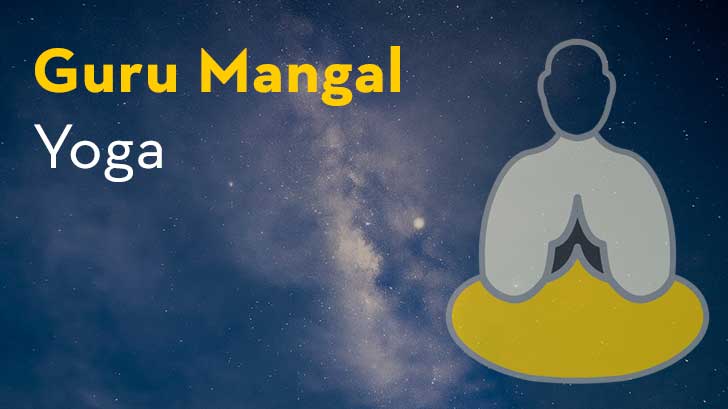 We often come across inspirational stories of famous people who dared to dream big. They went on to achieve their goals and made a mark in history. What makes these people so special? How did they recognise their special abilities and win the hearts of millions around the world?

The answer to your questions may lie in the effectiveness of Guru Mangal Yoga. It is one of the yogas found in the horoscope charts of eminent personalities. Read on to find out more about this yoga.

As the name suggests, Guru Mangal Yoga in Vedic astrology is formed by the conjunction of the planets, Mars and Jupiter. Since both these planets are known to be beneficial, their combination forms a yoga that is extremely favourable for the native.

How is the Guru Mangal Yoga Formed?

The Guru Mangal Yoga is formed when Jupiter takes up centre stage of the 7th house if Mars is ruling over the 1st house. The varying degrees at which these planets are positioned are also considered while calculating the strength of the Guru Mangal yoga.

The conjunction of these planets may also take place in the same house. In such a situation, this yoga will have a direct impact on the aspects controlled by that particular house. For instance, if the yoga is formed in the 2nd house (the House of Wealth), you will be blessed with a constant flow of money throughout your life.

Guru Mangal Yoga is a very auspicious yoga as it brings success and prosperity to the native. If this yoga is present in your natal chart, you will be blessed with a high level of intelligence and stamina.

This yoga will define your demeanour and enrich your personality. The fiery traits of Mars such as strength, aggression, energy, etc will dominate your personality along with the positive powers of Jupiter which will make you cheerful, spiritual, intelligent and inclined towards education.

Having the Guru Mangal Yoga in your natal chart will make you righteous and extremely moralistic. You will pursue all tasks with zeal. This yoga will have various effects on your life, some of which are discussed below:

In conclusion, when the powers of Mars and Jupiter are combined in your kundali in the form of Guru Mangal Yoga, you will be on the path to success, fame and fortune.