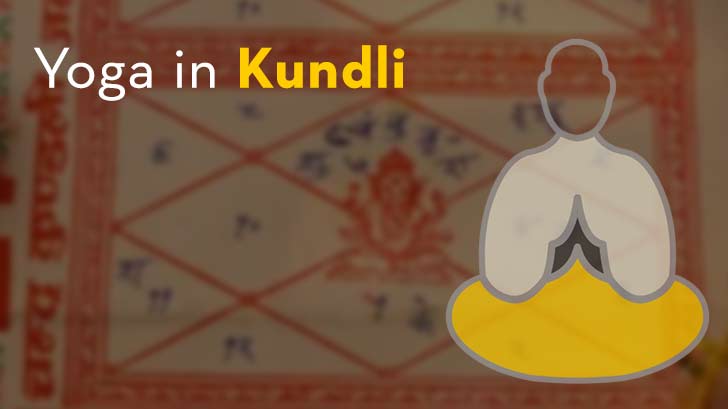 In the Kundli of any individual, the position of the planet is mapped at the time of birth. Yogas are formed by the positioning, conjunction, retrogression and also the direct and indirect influence of planets on different houses in the horoscope . The Yoga's formed in one's horoscope is believed to be the reason for his luck and fortune.

Names of the prevailing Yoga in the Kundli

Many Yoga can be made in the Kundli of the horoscope native, whereas the condition of every planet, the transit of planets and the planet's conjunction in a certain manner form a Yoga in, however, the below mentioned are the names of major Yoga which are quite famous.

Gajakesari Yoga - This Yoga is made from the Moon and Jupiter. When the moon and Jupiter is placed in the 1st, 4th, 7th and 10th house which forms the angular houses or Kendra according to Vedic astrology it forms the Gajakesari Yoga. The same is formed by Moon and Venus in the 'Kendra' of one's horoscope. This Yoga is extremely revered and considered a very good Yoga.

Buddhaaditya Yoga - This Yoga is formed by the conjunction of Sun and Mercury's conjunction. It will prolong till both of the planets remain in close proximity. 'Budhaditya Yog' is also considered to be a very auspicious Yoga.

Raj Yoga - This Yoga is formed when Jupiter is in Cancer, Venus in the ninth house and Jupiter in the seventh house of one's horoscope. The individual will be able to enjoy luxuries and accumulate wealth to a great extent during this time period.

Yoga or Dosha in the horoscope

The impact of Yogas and Doshas cannot be analyzed without looking at all aspects of the horoscope. Sometimes favorable Yogas will be reversed by the influence of Karmic planets in a negative state causing negative influences and vice-versa. Neech Bhang Raj Yog' is an example of it.

Connect with Astroyogi's expert astrologers to get personalized consultation about your Kundali.