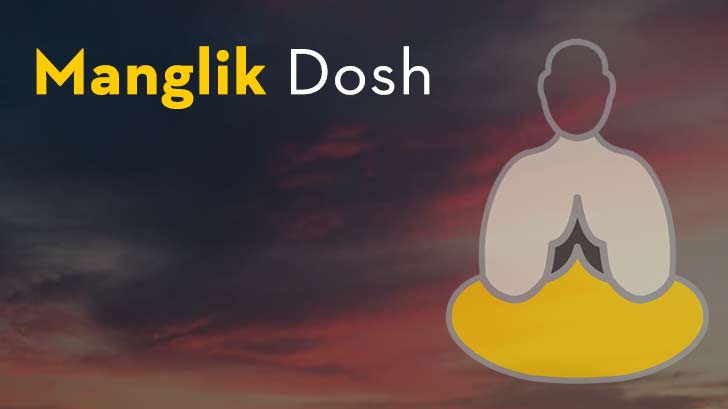 When Mangal or the planet Mars is in 1st, 2nd, 4th, 7th, 8thor 12th house of your horoscope, Manglik Dosh or Mangal Dosh enters your life. Mars is considered to be a ‘war’ planet. The effects of this dosh produce very unfavourable results due to the traits of the planet Mars associated with this dosh. Mars is associated with the attraction between two people of the opposite sex and that is why its impact is so immense in marriages. The effects that are expected to bother you vary with each house. Mars also represents ego and high energy; this dosh has the power to alter your nature to a great extent. If you are otherwise benevolent and considerate, the effect of Mars may make you coarse-natured, which is likely to harm your relationships.

If this dosh digs its claws into you, it will make you very egoistic. You could get involved in extramarital affairs, with the disastrous consequence of the dissolution of a happy married life.

This dosh is believed to stand nullified if two Mangliks get married. But if the opposite takes place then the marriage can turn out to be fatal. Manglik dosha is present in many horoscopes but it is easily nullified due to correct placement of other planets.

If you are born on a Tuesday and have Manglik dosh, it stands nullified, with no negative effects. It is strongly advised that one Manglik should only marry another Manglik. That way all the bad energy this dosh exerts on your life will be destroyed. You can then enjoy a stress-free married life with no financial, mental or emotional tensions.

Effects of Manglik Dosh in Kundli

The major effect of Mars falls on the ‘Marriage’ aspect of life resulting in tensions and mishaps with your spouse. The relationship between the partners will be anything but harmonious. Small problems can escalate and take a violent turn. Happiness will remain elusive and the chances of separation are high.

You will become very irritable and short-tempered leading to fights in the family. The Manglik dosh can also make you a very lazy and careless person. You may lose ancestral property and wealth. You will feel extremely restless and experience considerable mental agitation. There will be no sense of satisfaction in anything you do and thus you will find yourself shifting gears constantly.

When you get married you may find your partner to be your exact opposite. A violent or aggressive partner is very likely to come into your life or you may be that violent partner yourself. Either way this will end in a failed or difficult marriage. The deteriorating health of your spouse could leave you extremely vulnerable.

There are chances that you will gain many enemies. Overall disharmony is very prominent during this dosh. Violence and accidents will occur if you engage in heated arguments. You will feel the need to dominate those around you, which could lead to conflicts. There will be no oneness or caring between the couple, which is not healthy in the sacred union of marriage.

Make it a habit to chant Gayatri Mantra 108 times a day. Visiting a Hanuman temple on Tuesdays will improve your condition during this phase. Also, fasting on every Tuesday of the new month is a great remedy if you are afflicted by the Manglik Dosh. Kumbh Vivah, before your actual wedding, is also an effective remedy to nullify the bad effects of this dosh. Ina kumbh vivah, you are required to marry a peepal tree or a banyan tree as a remedy to remove the shadow of Manglik dosh from your life.

Match your kundalis before tying the knot – what if you have the Manglik Dosh! If you do and your partner doesn’t, then you must administer suitable remedies. Wearing the right gemstones can also reduce the effect of the dosh to a great extent. Worshipping Lord Vishnu will greatly help during the presence of this dosh.