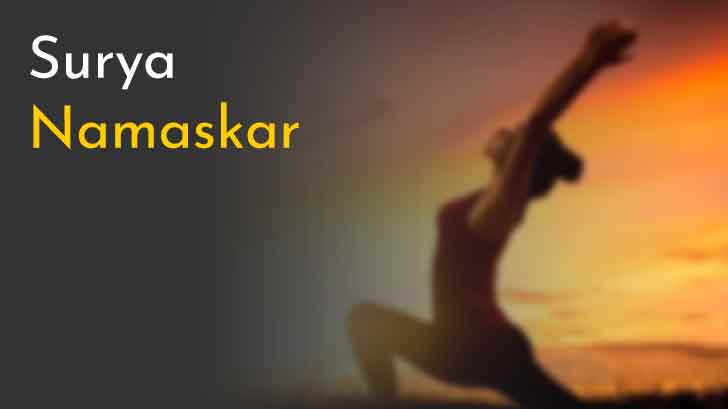 Can you ever imagine your life without the sun? What will happen if we become deprived of this essential source of light and energy that illuminates the earth? Of course, all life would perish because survival is impossible without the sun.
So that means that we owe our survival to the sun. Don’t you think that we must give anything in return? Surya Namaskar is the answer to this question. It is an age-old yoga exercise that is practiced to express your gratitude towards the Sun.

What exactly is Surya Namaskar?

Surya Namakar simply means “a salute to the Sun.” It is basically an exercise that consists of a sequence of 12 postures or yoga asanas. It is considered to be an amazing cardio workout that works for the welfare of your body and also has a deep and lasting impact on your mind.

It is said that doing one round of Surya Namaskar is equivalent to practicing 288 yoga postures. As per the traditional practice, each posture of Surya Namaskar is accompanied by a mantra or chant. The 12 postures represent the 12 zodiacs and energize those parts of the body that are ruled by these sun signs.

Surya Namaskar is a very important practice that forms the core structure of yoga. No yoga practice could be completed without performing Surya Namaskar because it enhances the physical, mental and spiritual level of an individual. Without such practices, yoga will lose its true meaning and would be no better than any other form of exercise.

The Science of Surya Namaskar

Surya Namaskar is a unique yogic practice that is supported by the scientific world as well. As per scientific evidence, Surya Namaskar has proved helpful in relieving mental diseases such as depression and stress. It has also proved beneficial in correcting the lifestyle disorders that have become a part of the modern world.

According to scientific research, Surya Namaskar has been tested to improve the functioning of lungs, cardiovascular system and the respiratory system as well. It has been observed that it stimulates every organ of the body and increases the strength of the muscles as well. It has also been found that it increases the attention span and concentration skills of adults and children alike. Thus, the world of science has also found Surya Namaskar to be a healthy and fruitful practice.

How to Perform Surya Namaskar?

The early morning hours are said to be the most apt time to perform the Surya Namaskar. The freshness of the morning will revitalize your body and regenerate your senses. Also, the sun does not generate unbearable heat during this time and therefore, this is the best time to go for Surya Namaskar.

You just need to keep in mind that you do the Surya Namaskar on an empty stomach. Also make sure that your body is not stiff because that may lead to injuries while performing the poses. It is beneficial to practice it in an open area so that you are able to form a connection with nature and directly express your emotions to the Sun God (Lord Surya as per Hinduism).

There are 12 different yoga asanas that form the Surya Namaskar steps. These yoga asanas are discussed in brief as follows:

Pranamasana (Prayer Pose) - Stand in a straight position with your feet put together. Breathe in and expand your chest while joining your hands in a prayer position.

Ashwa Sanchalanasana (Lunge Pose) - Breathe in and move your right leg backward while touching the ground with your right knee.

Dandasana (Stick pose) - Inhale and bring your left leg in the same position as the right one and elevate your posture.

Bhujangasana (Cobra pose) - Put your lower body on the ground and try to raise your head and upper body in a snake like manner while keeping your elbows bent and the shoulders way apart from the ears.

Adho Mukha Svanasana (Downward facing dog pose) - Exhale and lift your hips and tailbone in such a way that you make an inverted ‘V’ shape with your body.
Ashwa Sanchalanasana (High Lunge Pose) - Take a deep breath and move your right foot forward between your hands while touching the left knee to the ground and look straight.

Hasta Padasana (Standing Forward Bend) - Bring your left foot forward and bend your body while touching the floor with your hands.
Hasta Uttanasana (Raised Arms Pose) - Straighten your spine and stretch your hands in the backward direction.

Tadasana (Mountain Pose) - Breathe out and stand in an attentive position with your feet together and your hands at your sides to relax your senses.
By practicing these asanas at one go, you will complete one set of Surya Namaskar. You may find it difficult at the initial level, but with continuous practice, you will be able to perfect it within no time.

Surya Namaskar yoga is a highly effective exercise that reaps many benefits. Some of these benefits include:

By practicing Surya Namaskar on a regular basis, you will open the doors of a healthy living that will raise your physical, mental and spiritual levels. It is a very important yoga exercise that can give you wellness, peace of mind and joy of living.