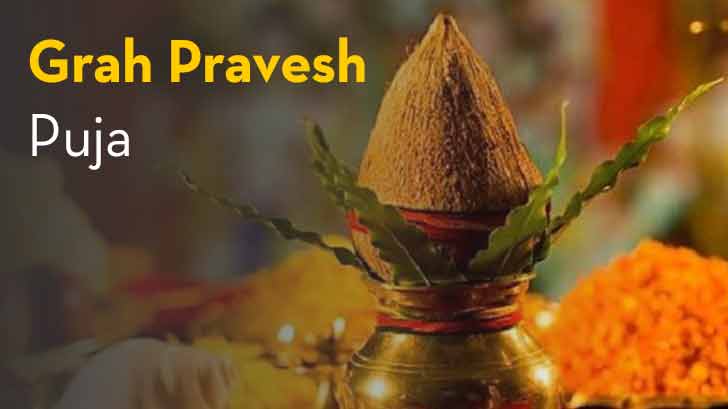 Graha Pravesh (i.e. first entry into the newly built house) is also as important aspect of Vaastu-Shastra and it has to be dealt with here in this book. After completion of the house in all respects, living in that house is started with auspicious moment determined on astrological considerations. Graha Pravesh ceremony is an auspicious moment to the first entry in the house.

Three types of Graha Pravesh have been mentioned in the scriptures -

Apoorva - First entry to live in house newly constructed on a newly selected land is called Apoorva (new) Graha Pravesh.
Sapoorva - Entry into an already existing house to live in it after traveling abroad or migration elsewhere, is called Sapoorva graha pravesh.
Dwandwah - Entry into a house to live in it after reconstruction/renovation of the house damaged by fire, flood waters, electricity, wind etc. is termed as Dwandwah (or old) Graha Pravesh.

Scriptures have described the procedures of Graha Pravesh at auspicious time (muhurat) and purity (defectless) of Panchang. For Apoorva Graha Pravesh one should adhere to perfect timings to and fro Graha Pravesh in a reconstructed house or after migration. The purity of Panchang should be given consideration.

If the doors of a house are not fitted with shutters, or the roof is not covered, or the God, Vaastu have not been worshipped and offered sacrifices, and if the priests etc. have not been offered feast, first entry into such house (Graha Pravesh) should not be accomplished till the above things are completed, otherwise a life in such a house will be full of troubles and miseries. Therefore, living in a house should be started only after offering sacrifices and worshipping Vaastu as per procedure given in scriptures.

Entry into a house built of grass and leaves etc. can be performed on any auspicious day. When the sun is Uttaraya especially for houses built with bricks, stone, mud, cement etc. the first entry is considered auspicious. If possible it should be performed in the first day itself. However, normally it can be done at any auspicious moment in the day or night. Guru (Jupiter) or Shukra (Venus) being set (invisible) i.e. Tara does not matter in case of Graha Pravesh in an old renovated house.

Tara should not be considered for the ceremony of giving food to a child for the first time (Anna Prashan), wearing new clothes, daily travels, first entry into an old renovated house and entry of a bride in the house, invisibility (setting) of Jupiter (Guru) and Venus (Shukra), only the purity and auspiciousness of the Panchang should be considered in such cases. Auspicious months for Graha Pravesh and the results of the same are as given below -

Besides these, the months of Kartik and Margshirsh give medium results. Graha Pravesh in the months of Ashadh, Shravan, Bhadrapad, Ashwin Paush is inauspicious and causes loss, troubles and pains, and fear of enemies.