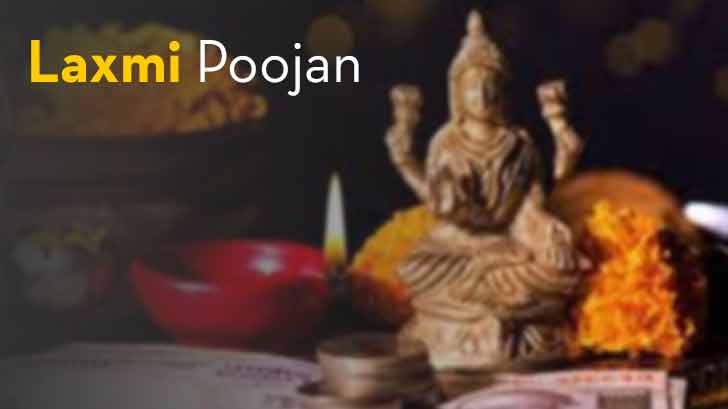 According to the Vishnu Purana, Lakshmi is the daughter of Bhrigu and Khyaati and resided in Swarga but due to the curse of Durvasa, she left Swarga and made Ksheersagara her home. The reappearance of Lakshmi after Samudra manthan and her marriage to Vishnu thereafter, remain the same. Lakshmi is the power and Maya of Lord Vishnu. This is consonant with the basic philosophy of "Sri-Vaishnavism" which honours Sri (Lakshmi) as the "Iswarigm sarva bhootanam" i.e. the Supreme goddess and not just the goddess of wealth. In some places She is seen in two forms, Bhudevi and Sridevi, both either side of Vishnu. Bhudevi is the fertility form in which She is Mother Earth. Sridevi is the wealth and knowledge of Her which is seen with Narayan. Most people are mistaken that they are separate beings although they are one, Lakshmi.

Lakshmi has many names. She is known to be very closely associated with the Lotus, and her many epithets are connected to the flower, such as:

Primary thing before starting Lakshmi pooja is neatness and cleanliness. It is said that Lakshmi resides in the places which are clean and tidy. So the first step for the pooja is to make your home and pooja room neat and clean. It is equally important for you to be neat and clean and don new, fresh clothes.

Take a red colour cloth and spread it at the sanctified puja place. On the cloth place the Deities or laminations of Lakshmi Narayana, Ganesha and Saraswati. On the side of cloth spread 9 mounds of rice and keep suparis on the top of the rice mounds which indicate nine planets or Navagraha devatas.

Kalasha Stapana:Place a pot filled with water or rice in front of Deities and adorn with betel leaves. Keep a coconut on the top of the filled pot. Dress the pot with red cloth and tie it around the pot. Mark ;lsquo;Swastik’ on the pot that represents prosperity and purity. This pot is called Kalash or Purna Kumbh and it represents the Universal power or Supreme Deity.

Decorate the Deities with flowers, fruits and turmeric-vermillion powder. Place Diwali thali before the Deities. This thali should contain few golen or silver or simply rupee coins. These coins are meant as representation of Goddess Lakshmi.

Now start the puja by taking water on your left hand and sprinkle on head to purify yourself. Take sankalpa by calling out your and your family’s name. Request that this pooja is to please Goddess Lakshmi and Narayana. Lit ghee lamps and offer incense.