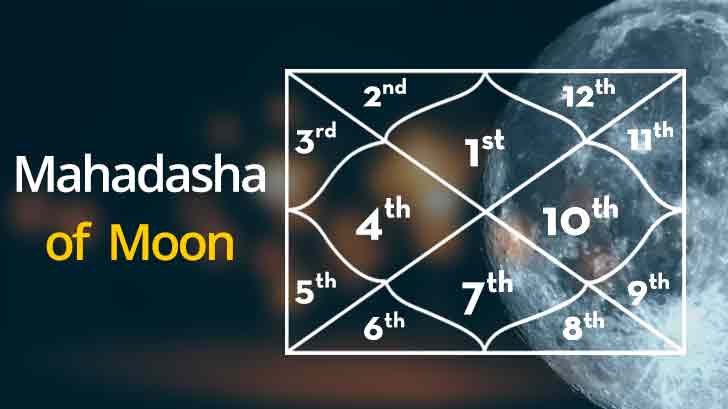 Moon is a very polite sort of planet and is known as the queen of planets. It indicates motherhood or femininity. During this dasha, you can find a strong connection and attraction towards the females in your life. Moon Mahadasha runs for 10 years during which you will feel great balance in your life, showcasing one of the major qualities of Moon.

An important planet from an Astrology perspective, the placement of the Moon can decipher many things in your life. You will notice that you have become a deep thinker during Chandra Mahadasha but your thoughts would be wayward and not crystal clear. Moon is the ruler of emotions and your thinking. Your heart will rule your brain during this dasha. If Moon is placed well in your chart then you can get a feeling of rich emotions with physical beauty and high calibre.

General representation of Moon is done by feminine qualities like nourishment, care, and love. The intuitive powers inside you will be extreme.

Moon is ruled by the element water which makes its ambience positive, rich, and deep. It makes you very generous and open-hearted. Generally associated with happiness, Moon Mahadasha in its positive state will give you high levels of satisfaction. There will be many good results which are about to come your way due to the Moon Mahadasha effects. A lot of good incidents and happy connections will embark presence in your life.

New and fresh thoughts will arrive in your mind and make you more blissful than ever. Your mind will open up due to all the new knowledge and stuff you are learning during this dasha. It will be a happy time for you without any reasons. There will be a lot of comfort in all the spheres of your life. Many skills will get added up in your Pandora box, helping you to grow tremendously.

Moon has a very big impact on the functioning of your mind, so you can see a great improvement in how your mind functions during this course. You can see a clear thought process and immense mental strength. A strong balance between your mind and body is common in this dasha. This equilibrium state can make you achieve things and heights which earlier sounded bleak and unachievable to you. In some cases, Moon Mahadasha can also bring power and social status, with a lot of fame and wealth.

Depression and restlessness are two very common negative effects that can happen to you during the Chandra Mahadasha. You can easily lose all your temper, patience, and calm in very small and meagre problems and daily situations, making you feel grumpy and irritable.

The Moon Mahadasha effects not only depend on the wrong placement of the Moon but also depend on your zodiac and following Antardasha. Everything combined leads to the overall impact a dasha can have in your life. Common malefic effects are being fearful, having an extreme inferiority complex, health issues, mental imbalance, business loss, and disturbance in your job.

The high imagination capability that comes in Moon Mahadasha can also be harmful because you tend to make situations difficult in your head, which is otherwise very simple and easy to tackle. If the Moon is not correctly placed then this can be harmful and can turn into insanity and weird behaviour. You can easily lose loved ones and friends because they will not be able to understand the complexities ruling your head. You can also have suicidal tendencies in worst-case scenarios.

Moon Mahadasha with other planets:

Moon Antardasha under Moon Mahadasha has a strong impact on your mood and similar related things. You will feel highly imaginative and artistic during this period. But it can also lead to mood swings and restlessness in your mind. There will always be waves of thought, running inside you during Chandra Mahadasha and sometimes you would be lost in your own world. You will not be able to understand the source and relevance of these flickers. Love can be in abundance during this dasha and some great monetary benefits can be seen.

This Mahadasha is very powerful for ascendants Taurus and Cancer. It is friendly with signs like Pisces, Sagittarius, Scorpio, and Leo. Also, Antardasha of Sun, Mars, and Jupiter under Moon Mahadasha is very beneficial while Mercury, Venus, and Saturn Antardasha can have a negative impact on your life.

The Antardasha of All Planets in the Mahadasha of the Moon

The Moon has been considered as the planet of mind and the planet of wealth in astrology. Moon is a peace-loving planet. At the time of its Mahadasha, Moon will do many good things for you in your work and you will be able to make the right decision. According to the astrologer, you will take a little time for your future because Moon’s Mahadasha, Moon (Chandra) Antardasha, work is done at a slightly slower pace. By the way, the Dasha of the Moon makes a person wealthy from both money and the mind.

During the Sun Antardasha in Mahadasha of the Moon, the spirit of doing something new in your life comes inside the mind. Because the Moon is the mind and the Sun is the soul, then at this time, you can take any right decision from the mind and your soul. At this time, the Sun bestows wealth, a satisfaction of mind and an increase of respect. Besides, you get the full support of your mother and father. This time may also indicate some gain from ancestral property.

At this time, when Mars Antardasha with the Moon, the person is full of wealth. And if the chart has the relationship between Moon and Mars, it creates Lakshmi Yoga in the horoscope. According to Vedic astrology, if yoga is made up of auspicious planets and is made in the center or triangle, it is considered very auspicious. Simultaneously in the Mars horoscope, this Dasha is viewed as a symbol of passion and a promoter of courage. Together with the Moon, Mars Antardasha promotes progress and brings prosperity in business.

At the time of Mercury’s Antardasha in the Mahadasha of the Moon, you have to face many problems. Works in progress are also obstructed because Mercury is considered an enemy of the Moon. In such a situation, Mercury’s Dasha will cause obstacles in your actions, and no work is completed on time. Due to which you may face troubles. You will have to face barriers in both business or a job. This yoga poses problems for relationships too. Especially for lovers, it becomes inauspicious, and may also act to end relationships. It can complicate relationships with your mother. In such a situation, you have to be careful.

According to astrology, the period of the Moon and Jupiter in Dasha increases name and fame. This period creates yogas for marriage. It indicates the beginning of fruitful love affairs, getting the right life partner, and the chances of getting a child. If we talk about careers, then it also makes progress in the work. If the position of the Moon and Jupiter in the chart is good or is at the center of each other, then this relationship is considered perfect. In a way, it is considered as a Raja Yoga known as Gajakesari Yoga. If the person wants to get a higher and good education, or if the person wants to study away from home, then those desires are fulfilled in time.

This time brings a lot of good in a person’s life. The desires of the mind are fulfilled. If a person wants to have his own house, then his dream of a home gets fulfilled. Along with this, good love affairs are formed, and progress is also made in the career. Astrologer says that sometimes it has been seen that at this time, there should be a greater mental satisfaction inside the person.

The astrologer says that this phase can bring problems in the life of the native. This time is a time of great trouble because Saturn’s movement at the time of the Moon’s Mahadasha ends the power of making decisions during obstacles and hardships. In such a situation, you do something that you may have to face loss. This time creates fear inside one’s mind. You are also more likely to suffer losses from friends and the chances of debts will rise.

The Effect of Rahu Antardasha in the Mahadasha of the Moon

This time it is going to bother you a lot. Mentally, you may develop depression. The chances of getting a disease also increase. Sometimes there is a lack of spark in the relationship with your mother. Your mother can suffer due to health reasons. There is a loss of money, loss of mind and sometimes even chances of imprisonment are there. Court cases, legal matters, etc. can arise.

The Effect of Ketu Antardasha in the Mahadasha of Moon

Although with Ketu Antardasha in the Mahadasha of the Moon, one has to face many difficulties. Even at this time, if a person is working with great sincerity and earnest hard work, then he/she gets success. Yes, it may take time, but eventually, you will. The yoga of wealth, especially the yoga of secret wealth, can also be obtained on time. If the Dasha of Ketu is good in the chart and the Moon is free from evil effects, then you can have the possibility of gaining secret wealth.