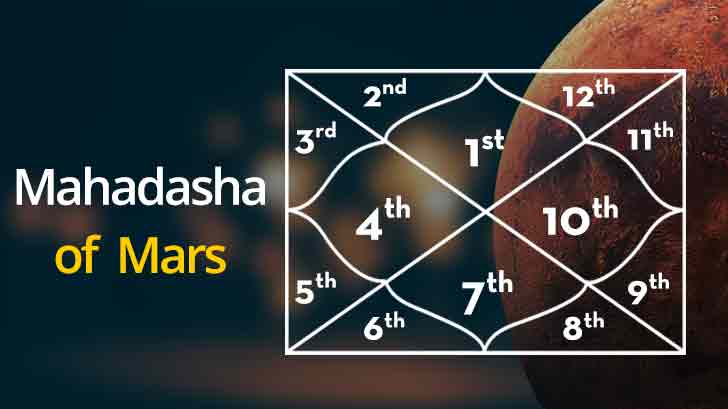 The Mars Mahadasha lasts in your life for 7 years. Mars is known to be a fiery planet and is famous to be the most aggressive amongst the rest. So during the mangal mahadasha, you should be ready to feel a little more energetic then you have always been. You will feel very courageous during the whole duration. Also, there will be a great increase in the amount of confidence and need for independence.

Mars represents ego, sports, and high energy. It is known as the God of war. So during this time, there are high chances that you get interested in such fields and activities. All good sportsmen or soldiers would have a strong and positive Mars during their important and good shifts in career. Mars is a very powerful planet so any problem coming your way will be curbed under the good impact of Mars. Triumphs will easily come your way.

When Mars is in full form, you will feel a great amount of energy to achieve almost anything. You will be a huge success in your profession; your money and wealth will increase rapidly. Due to your confident and independent demeanour, you will have a command over people and you will not find it hard to have things done your way.

Your leadership abilities will touch another tangent. Physical strength is an added advantage under strong Mars Mahadasha. Along with all this, your desires will also increase making you an overachiever. Increase in the use of your body will be seen from time to time during the mangal mahadasha, while you are working. If there are unfinished projects or matters then they can get completed or looked after with ambition due to Mars Mahadasha effects.

It is likely that you would have a feeling to take the command of your life in your own hands. Due to all the energy and stubbornness, there might be anger bouts or rash behaviour. Mars Mahadasha protects you from all the harm and dangers. You might follow the best path amongst all during this dasha.

There are high chances that if the planet is placed wrongly then you become very prone to accidents and injuries, due to high risk-taking behaviour and attitude. Wounds, bruises, rashes are very common during a heavy Mars in your natal chart. There will be little patience left in you which can pose many hurdles in your life.

When hitting negatively, Mars Mahadasha can make you feel very lethargic. You will lose all interest in going out and indulging in any outdoor activity. No task will see a spark of zeal from your end. There will be a lot of sleeping pattern issues and due to this, you might feel restless and often feel panicked. Chances are that you might have to undergo some serious surgeries during this Mahadasha.

Wherever a little courage will be needed you will take backtrack, to be safe. There will be no spine in you to stand for yourself or anything you believe in. This is exactly the opposite of the results that one sees in the positive phase of mangal Mahadasha. No confidence will be left inside you and you have to be dependent on others for everything that needs to be done. If you are in a field where manual work is needed you will hardly move ahead in your career and will be extremely stressed due to underperforming.

Mars Mahadasha with other planets:

Mars Antardasha under Mars Mahadasha can make you a winner in almost every obstacle that you face in your life. People won’t be able to do anything bad to you and the path will become very easy during mangal mahadasha. You will do well in every sphere of life be it managing your finances or moving up in the ladder of your career. Marital prospects are very high. But negative Mars Mahadasha effects can lead to dangerous accidents, property loss, poor career, and extremely slow growth in business.

b is friendly under Sun, Jupiter, and Moon Antardasha.

Mars ruling signs are Aries and Scorpio. It is also powerful with Pisces, Sagittarius, Leo, and Cancer. These ascendants will be highly benefited during this dasha. Capricorn and Libra will see negative impacts on their lives. However, this is a generalized approach and these effects are dependent on many other factors too.

The Antardasha of All Planets in the Mahadasha of Mars

When it is the Antardasha of the Sun along with the Mars Mahadasha, then the native gets a lot of progress in his field of work. Especially if the person is doing some land-related work, then he gets benefits from it. In this case, if people want to go into politics, they can get good benefits. If at this time the person is contesting an election, he can get success. Along with this, this Dasha also plays a significant role in getting Manglik work done.

The Effect of Moon (Chandra) Antardasha in the Mahadasha of Mars

When Moon Antardasha and Mars Mahadasha are going on together, there is an increase in wealth and name and fame. In particular, land-related benefits are good. Along with this, Manglik works are also done. In Vedic astrology, the Moon is considered the planet of a good relationship with the mind and mother. Therefore, the relationship with the mother remains perfect and the native gets good support from the mother. Some foreign trips also happen at this time. The astrologer says that the yoga of Mars and Moon is also called Lakshmi Yoga. If Mars and Moon are together in the chart, then it’s considered an auspicious yoga. In such a Dasha, the native is complete with wealth.

The Effect of Mercury (Budha) Antardasha in the Mahadasha of Mars

If the Mahadasha of Mars is going on and Mercury is in Antardasha, the person decides in a little hurry. Due to which sometimes he also has to face loss. The astrologer says that one thing good about this Dasha is also that if we work very wisely using the mind in the Dasha of Mars and Mercury, then good benefits are also obtained. Mars is a sign of vigor, an indicator of power and might. With Mercury, the planet of wisdom, the combination of intelligence and courage, the native achieves success in every field.

The Effect of Jupiter (Guru) Antardasha in the Mahadasha of Mars

If the Mahadasha of Mars is going on along with Jupiter Antardasha, then at this time, the person gets an excellent response. Marriage yoga is formed for the native, and he is blessed with children because Jupiter is also the planet of knowledge and creation. That is, Jupiter is considered to be the creator of a child. In such a situation, we get great benefits in both these things. The Dasha of Mars and Jupiter also shows that if a person wants to progress in his field at this time, then time is with him. In particular, business progresses. During this period, if a person works related to education, then he gets benefits from it. If he is currently preparing for the government service, he can also achieve success.

The Effect of Venus (Shukra) Antardasha in the Mahadasha of Mars

If the Mahadasha of Mars is going on and there is the Antardasha of Venus, then this time, especially in the life of the native, brings opportunities for getting a new life partner. The astrologer says that Mars is also associated with Manglik work and Venus has a relationship with love. Hence the chances of getting married at this time are more likely. In the field of work also, the person gets good benefits. Especially at this time if the person is doing work related to fashion. Mars is also associated with the land, so a person gets good benefits from the land. If a person wants to build his new house, then he can build a house by purchasing the land himself. This brings a lot of mental satisfaction. If the person wants to do some work far from his birthplace, that person also benefits from this Dasha.

The Effect of Saturn (Shani) Anatardasha in the Mahadasha of Mars

While the Mahadasha of Mars is going on together with Saturn’s Antardasha, one should be very careful at this time because both Mars and Saturn are considered to be malefic planets. If they are in the birth chart together or their vision is related, then accidents are bound to happen. There is a need to be very careful at this time, because of Mars, Saturn’s yoga sometimes leads to loss of life. The Antardasha of Saturn with the Mahadasha of Mars also shows that you may suffer a significant loss at this time. In the office, you may face loss at work. The native needs to be cautious as enemies can dominate.

bThe time of Mahadasha of Mars, together with the Antardasha of Rahu, is considered the factor for losses. Significantly, the risk of health-related problems increases. An unknown disease arises, and if seen in this period, Rahu puts the person in debt. Sometimes it has also been observed that it causes legal loss to the native. Chances of imprisonment can also be there. Cases related to legal matters are also very high at this time. Some rifts and domestic problems can also arise.

bIf the Mahadasha of Mars is going on and Ketu is in Antardasha, then Mars gives fruit according to its position in this period. If Mars is a yogic planet in the chart and is providing good results, then Ketu, along with it also gives good results to that person. But if Mars is a loss-causing planet in the chart, then the problem increases by four times and one has to be very careful.