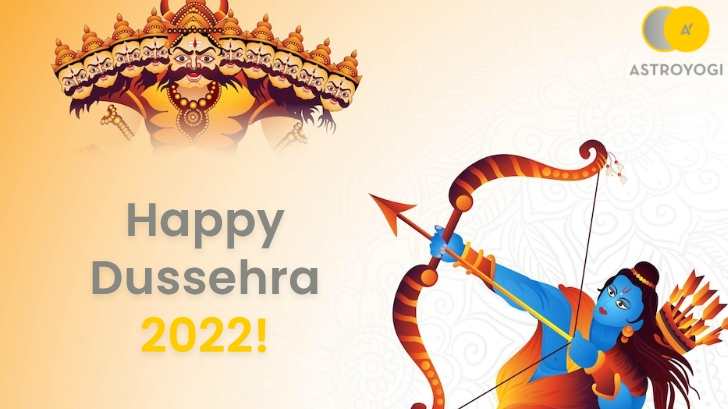 The Indian festive season is here! A discussion of Indian festivals would be incomplete without mentioning Dussehra. But what makes the Dussehra festival so unique and popular across India? Let’s get some interesting insights into the celebration of Dussehra, its history, significance, and much more.

Dussehra, also known as Vijayadashmi, is a widely celebrated Indian festival held on the 10th day of the Hindu calendar month of Ashwin. This day usually falls in September or October on the English calendar. The Dussehra day falls on the 10th day of the nine-day Hindu fasting period of Navratri. The festival of Dussehra commemorates Lord Rama's defeat of the demon Ravana. The day of Vijaya Dashami is also when Goddess Durga kills the demon Mahishasura. On this day, after the Durga Puja, the idol of Goddess Durga is immersed in the water. Dussehra is widely celebrated with great zeal and enthusiasm throughout India and neighboring countries such as Nepal, where Hinduism is the most widely followed religion. Dussehra, also known as Dashain in Nepal, is the country's longest Hindu festival.

Also Read: Benefits of Numerology that You Must Know

The purpose of celebrating Dussehra is to honor and remember Hindu culture while passing along its wisdom to future generations. The celebration of Dussehra has special significance in Hindu culture. The meaning and perception of the Dussehra festival are unique. Dussehra is derived from the Sanskrit words Dasha (ten) and Hara (defeat). Hence, the festival of Dussehra honors the triumph of good over evil. The tenth day, or Dussehra, is when Lord Ram killed the demon king Ravana, according to the great Hindu epic Ramayana. The day of Dussehra is also celebrated as Durga Puja in Eastern parts of India, where people celebrate Dussehra to commemorate the day Goddess Durga slew the monster Mahishasura. According to Hindu scriptures, it is also thought that by participating in Durga Saptashati Puja or other rituals on this day, Goddess Durga bestows her blessings and shields us from all evil powers.

In a spiritual sense, Dussehra also represents a new beginning and the elimination of negativity and evil, such as biases, prejudices, and stereotypes that reside within us.

History/Legend of the Dussehra Festival

In the revered Hindu epic Ramayana, the legend of Lord Rama rescuing his beloved wife Sita—who had been forcefully abducted by the demon Ravana, the emperor of Lanka—is told. According to Hindu mythology, Shoorpnakha, Ravana's sister, fell in love with both Rama and Lakshmana (Rama's younger brother) and desired to marry either of them. When the brothers refused her desire, she threatened to kill Sita. Lakshmana became enraged and cut her ears and nose. As a result, Ravana abducted Sita to exact revenge on his sister. In order to save Sita, Rama and Lakshmana fought a battle with Ravana in Lanka. Lord Hanuman and an army of monkeys assisted the brothers in fighting the demon army.

How is Dussehra Celebrated Across India?

Every part of the country celebrates Dussehra with great zeal and in a unique fashion. Here’s how Dussehra is celebrated in various parts of India.

Dussehra in North India - Dussehra is celebrated in most North or Western Indian states in honor of Lord Rama. Dussehra is usually celebrated by burning the massive effigies of Ravana and his brothers Kumbhakarna and Meghnath. Ramleela, a theatrical presentation of Lord Rama's life narrative, is organized by devotees in the days leading to and on the day of Dussehra. On the day of Dussehra, a fair is organized and attended by the public. Three people dressed as Rama, Lakshamana, and Sita riding on a chariot pass through the crowd. The person portraying Ram fires an arrow at the effigies one by one.

Dussehra in South India - In South India, the festival honors three Hindu Goddesses, including Lakshmi (Goddess of wealth and prosperity), Saraswati (Goddess of wisdom and the arts), and Durga (Goddess of power and strength). People clean their homes, worship these goddesses, and seek their blessings. On the 10th day, people typically worship Goddess Saraswati. The day begins with devotion to literature and educational resources. Starting any kind of learning on this day is thought to be particularly lucky.

Also Read: Libra Season: Did You Try These Powerful Affirmations?

Dussehra in Gujarat - During Navratri, the people of Gujarat gather and dance every night. On the Dussehra festival, several events are held, and men and women perform the famous Gujarati folk dance known as "Garba" to devotional music. Men and women dress in their best traditional attire and dance until late at night. Garba usually begins late at night and lasts until dawn in many places.

Dussehra in Mysore - In Mysore, Dussehra, called Dasara, is well-known and is celebrated with grandeur. Mysore, also called the city of palaces, hosts a plethora of fairs and cultural events, much to the delight of thousands of visitors. The highlight of this ten-day festival is the spectacular parade of bedecked elephants and mounted guards escorting the idol of Goddess Chamundeshwari, which is set atop a golden altar, throughout the city. Legend has it that Goddess Chamundeshwari (another name for Goddess Durga) had killed the powerful demon King Mahishasura.

Dussehra in Kullu - This quaint town nestled in the lap of the majestic Himalayas comes alive during its much-awaited Dussehra festival. During Dussehra, chariots are decorated with vibrant colors. The Gods and Goddesses are decked up and carried around in a huge procession on these beautiful chariots. People dance joyfully and ecstatically to celebrate the festive day of Dussehra.

While numerous other stories and significance are associated with the Dussehra festival, its essence remains the same: the triumph of good over evil. Whatever the stories, festivals in India convey the message of goodness, peace, love, and harmony.

Here’s wishing you a Happy Dussehra 2022!

To learn more about the various rituals associated with the Dussehra festival, you can consult expert astrologers on Astroyogi. Consult NOW!