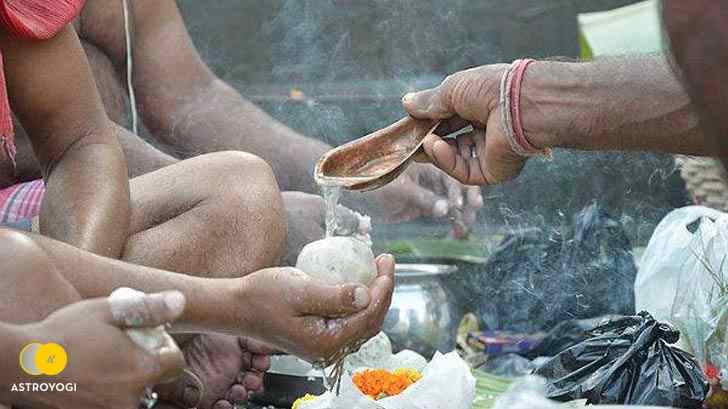 Vedic astrology is very accurate and can provide us with great insights of the natives with the help of their birth chart. The twelve different houses in a native’s birth chart, are symbolic of all the departments that make up human life. The ninth house, known as the house of father and manes, is of great importance as the placements of planets here decide if the native will suffer from obstacles in the various paths of his life. The ‘Dosha’ formed here which creates problems for the native is called ‘Pitra Dosha”.

It can also occur when Sun and Rahu or Sun and Saturn form a conjunction in the first, second, fourth, seventh or tenth house. And also if Rahu is in the ascendant and is situated in the sixth, eight or twelfth house.

Hindu religion believes that if there has been an unnatural death in the family, it is due to the effect of ‘Pitra Dosha”. If the souls of our ancestors are not at peace for whatever reason (it could be their unnatural death, or their souls not being appeased after death), it has a bad effect on the family and they have to suffer hardships.

According to the ‘Puranas’ on the eve of ‘Krishna Paksha' of ‘Ashwin’ month, the God of Death, Yamraj, grants freedom to the souls of our ancestors and allows them to accept and eat the food prepared by their family.

If the family fails to offer food to them, the souls get upset and their anger transforms into misfortune for the members.

It is believed that Pitra dosha can also be formed if the native has committed some sin in his past birth knowingly or unknowingly; or if his ancestors have.
These are carried as debts in our lives till they are cleared by performing certain rituals.

Expert astrologers at Astroyogi could provide you with remedies and Pooja methodologies for Pitra Dosha, after analyzing your horoscope.

Pitra Dosha can curse the native on many fronts; whether on him directly or indirectly through problems faced by the family.

The native can keep falling sick from birth or as he grows can have accidental injuries very frequently. There could be hindrances in his education; he may not get a good job easily. Native could have problems in finding a good life partner and when married, could be unhappy because of disharmony with the spouse.
There could be difficulty in conceiving, property disputes, poverty and native could always be burdened with debts.

The most important and effective way to pacify the ancestors is to perform ‘Shraadh’ for them during the ‘Krishna Paksha’ of ‘Ashwini Month’ on the day of their death. Worship them before worshipping the deities. Offer sesame, couch grass, flowers, raw rice grains and ‘Gangajal’. Native should respectfully feed his ancestors favorite food to the needy. Donate clothes, fruits, and sweets to them.

In case native does not know the date of ancestors death, Shraadh should be performed on the ‘Amavasya’ day of the ‘Ashwani’ month.

Native can also offer food and clothes to the poor on every ‘Amavasya’ to reduce the effect of Pitra Dosha.

At Sunrise one should do ‘Surya Namaskar’ and chant ‘Gayatri Mantra’ to strengthen the position of Sun in the horoscope.