Do You Have Mangal Dosha In your Kundli? Know All About It To Set Your Mind Free! 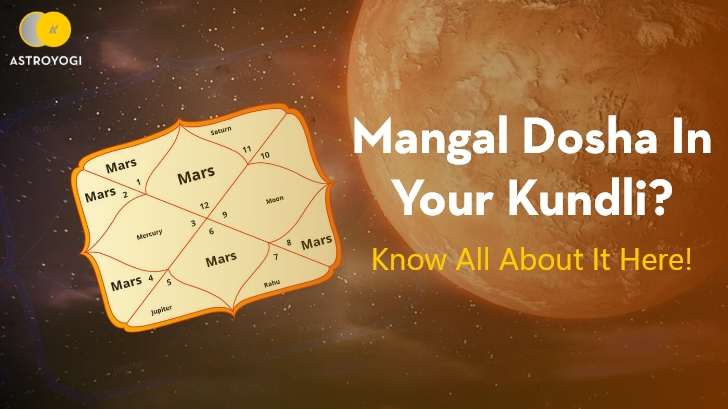 The Indian Jyotishya Sastra is popularly called Vedic Astrology, not because astrology is there in the Vedas but because it has been there since the Vedic times. It is one of the six Vedangas or limbs of the Vedas. These esteemed works have explained the Mangal Dosha in detail. Read the article to know more about the dosha that scares even the mighty and the powerful:

The principles of our astrology were given by Rishis like Parasara, Bhrigu, and Jaimini with their divine knowledge. Rishi Parasara was the one who systematically laid down the astrology principles in his immortal classic “Brihat Parasara Hora Sastra,” written some 5000 years ago. Astrology writers who wrote books on astrology in later days based their principles on his work.

Though astrology was born in India, many Indians, and even astrologers, have many misconceptions about several astrological facts. One of the biggest misconceptions and fears in Hindu society with respect to marriage is the presence of Mangal Dosha or Kuja Dosha in the chart of a boy or a girl. A countless number of good matches are being rejected by people just because the boy or the girl has Mangal Dosha present in the chart.

Let us understand this in a little more detail:

What Is Mangal Dosha?

However, Mangala Dosha is not something that can be ignored. It does cause marital discord. Before marriage, it is essential to match horoscopes for Kuja Dosha. If a person has Kuja Dosha in the horoscope, the spouse must also have Kuja Dosha. This way, the Dosha is canceled. Otherwise, both should be without any Dosha.

Various “authorities and experts” have given a lot of exceptions and cancelations for the Dosha. They are so many that almost everything is canceled! The truth is that in the majority of the cases, the so-called exceptions and cancellations do not work. So, we must follow Rishi Parasara’s principles.

Apart from Mangala Dosha, a horoscope may have many other doshas with respect to marriage. Any affliction to the lord of the seventh house of marriage or any malefic planet in the seventh house and any afflictions to Kalatara Karaka Venus can cause severe disruptions to one's marriage. The matching of horoscopes and especially determining the extent of Mangala Dosha is the job of an experienced astrologer and must be done after carefully analyzing both the horoscopes and both Navamsa charts.

For a detailed consultation on Mangal Dosha, connect with Astroyogi astrologers today!

Hindu Astrology
How was your Experience