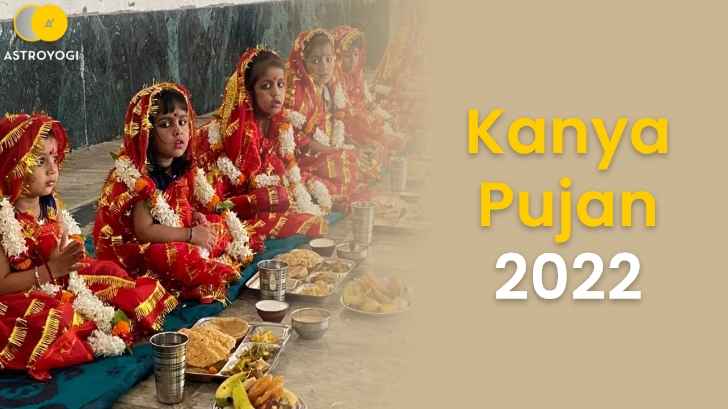 Without Kanya Pujan, the worship of nine little girls to honor Goddess Durga’s nine different forms, the pious Hindu celebration of Navratri is incomplete. Read on to get more insights into the Kanya Pujan, including when Kanya Pujan 2022 will be, its rituals, significance, and more.

Kanya Pujan, also known as Kumari Puja or Kanjakk, is a Hindu ritual performed on the eighth or ninth day of the nine-day long holy Navratri festival. During Navratri, devotees invite nine little girls to their house to worship them, who represent the nine Avatars (known as Navardurga) of Maa Durga or Goddess Durga. The Kanya Puja honors Durga in her nine forms, namely-

As per the holy texts, worshiping one girl child is said to bring good fortune, two girls bring perception and salvation, and three girls bring merit. Worshiping four and five girls is thought to bestow authority and knowledge, respectively, whereas nine Kanya Puja is believed to bestow supremacy. The Indian states of Delhi, Punjab, Haryana, Uttarakhand, Uttar Pradesh, Madhya Pradesh, and Bihar are among those where Kanya Pujan is primarily practiced.

Let’s discover more about the pious ceremony of Kanya Pujan ahead.

Kanya Pujan is usually performed on the 8th day or Ashtami or the 9th day or Navami during the Navratri.

During the Shardiya Navratri 2022, Goddess Durga will ride on an elephant as she descends to Earth. According to Vedic scriptures, the Goddess is believed to arrive on an elephant when Navratri starts on Sunday or Monday. The elephant is considered to be the auspicious vehicle of Goddess Durga. Vedic texts also state that when Durga rides an elephant, there will be happiness and prosperity everywhere.

How To Perform Kanya Pujan?

Kanya Puja is recommended in religious texts to be performed on all nine days of Navratri. On the first day of Navratri, only one girl should be worshiped, and one girl should be added each day thereafter. Many people, however, prefer to perform Kanya Puja or Kumari Puja on a single day, either Ashtami or Navami. Hence, depending on your beliefs, you can perform Kanya Pujan at home on the day of Ashtami or Navami. According to religious texts, girls between the ages of two and ten are appropriate for Kumari Puja, while girls under the age of one should be avoided. The girls, who range in age from two to ten, represent nine different forms of Goddess Durga.

Must read: Navratri 2022 Shopping Guide: What Should The 12 Zodiac Signs Buy?

What are the Rituals or Vidhi of Kanya Pujan 2022?

Do’s and Don'ts of Kanya Puja

Astroyogi wishes you a Happy Navratri and Happy Kanya Pujan 2022!