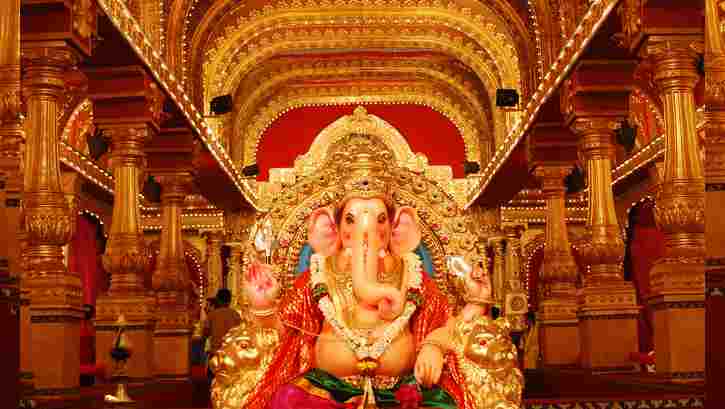 “Ganapati Bappa Morya, Pudhchya Varshi Lavkar Ya.” This slogan reverberates all over India, especially in Maharashtra, during the entire ten days and nights of the Ganesh festival. The chant translates to “Salutations to Ganapati (Ganesha), Let the next year come soon.” While Ganesh Chaturthi is celebrated pan-India, we witness these Ganesh pandals more in Maharashtra. Before we discuss the top Ganesh Chaturthi pandals across India, here is a brief intro to the festival.

The festival falls on the fourth day (Chaturthi Tithi) of Shukla Paksha in Bhadrapada month. The festival spans over ten days and culminates with the immersion (Visarjan) of the Ganesha idol on Ananta Chaturdashi (the 14th day of Shukla Paksha). While people celebrate the festival at home, Maharashtra celebrates it publicly by setting up giant-sized Ganapati idols in pandals. Hence, it is known as Sarvajanik Ganshotsav. So, let us now discuss the top ten Ganesh Chaturthi pandals across India.

Lalbaugchya Raja has been reigning supreme in Mumbai for more than 85 years since it was first installed during British rule. Lalbaug in Mumbai was where the weavers and other workers lived in the old days. This pandal is one of the most decorated in Mumbai and witnesses an average footfall of around 15 lakhs daily during the festival's ten days. Folklore is that Lalbaugchya Raja grants its devotees’ wishes if they pray with total dedication.

Dagadusheth Halwai Ganeshotsav is one of the oldest Sarvajanik pandals in India, as the festival has been celebrated here since 1896. Dagadusheth Halwai was a sweetmeat businessman from Karnataka who settled down in Pune. The Ganesh idol installed here has a reputation for being the most expensive in the country. There are reports that the idol is insured for nearly a crore rupees.

Source – The Times of India

All roads in Mumbai lead to Ganesh Galli in Lalbaug, Mumbai, during the ten days of Ganesh Sarvajanik Utsav. This pandal is renowned for its classical idols that convey a social message every time. This pandal has the distinction of being the oldest pandal in Mumbai. Ganesh Galli pandal was established in 1928 by the mill workers in Lalbaug.

Hyderabad is another city celebrating the Sarvajanik Ganeshotsav with high enthusiasm and enjoyment. Khairtabad Ganesh Pandal is traditionally the largest Ganesh pandal in Hyderabad. This year, the idol is nearly 100 feet tall and costs up to Rs 1 crore. The idol is made from clay sourced from Rajasthan and painted with organic colors.

Kasba Ganpati has a history dating back to the days of Shivaji Maharaj. Jijamata, Shivaji’s mother, built this temple. Though it is a Ganesha temple, it celebrates a Sarvajanik pandal yearly. Lokmanya Tilak started the Ganesha Sarvajanik festivals in Pune at Kasba Ganpati. This idol has been ranked as one of the best in India for many years.

Khetwadi and Girgaum are business areas with predominant Gujarati and Marwari populations. However, these communities come together with the native Maharashtrians to celebrate the Sarvajanik Ganeshotsav yearly. These pandals are installed with specific themes, with the idols designed aesthetically. There is no doubt that this Ganesh pandal rightfully claims the honor of being the King of Girgaum (Girgaumchya Raja).

GSB Ganpati has been the wealthiest Ganesh idol in India for many years consecutively. This year, the idol is adorned with gold, silver, and other precious stones. This idol is installed in Kings Circle, a suburb in Mumbai heavily populated by South Indians and Gujaratis. This pandal witness more than 65000 pujas annually. The exciting aspect of this Sarvajanik Ganesh idol is that it is installed for five days instead of ten. Therefore, the immersion happens on the fifth day of the festival.

Nagpur has been celebrating the Sarvajanik Ganesh festivals for nearly 60 years now. Though the pandals and idols are not as big as that in Pune and Mumbai, the Dharampeth Sarvajanik Ganeshotsav is the biggest pandal in Nagpur. This year, the Ganesha idol looks different, with various smaller idols making up the bigger statue to rank among the most innovative pandals on display.

Nashik in Maharashtra is another industrial city that has hosted Ganeshotsav pandals for many years. Though the pandals and celebrations are not as grand as in Pune, the Nashik Cha Raja occupies pride of place as the best Ganesh Chaturthi pandal in Nashik. The pandal is installed at Ghankar lane, Ashok Stambh, Nashik. The idol is worshipped for ten days before immersion on the tenth day of the festival.

Goa is similar to Maharashtra in many ways. Goa has a significant Marathi population. So, Ganesh Chaturthi is a popular festival in Goa. Though the pandals might not be as massive as they are in Maharashtra, Goa has its share of Ganesh pandals. The Sarvajanik Ganeshotsav at Panjim is one example where the Ganesha idols are open to the public, with Puja and Aarti conducted daily for all ten days. Sarvajanik Ganeshotsav pandals are also available at Margao and Mapusa.

Ganeshotsav is amongst the most celebrated festivals in India. The traffic almost reaches a standstill in the areas where the Ganesha pandals are installed. These pandals witness a tremendous stream of devotees throughout the ten days. The primary idea behind celebrating these festivals on a large scale was to foster relations between people from different faiths and castes. It is one time people put away their differences and celebrate Ganesh Chaturthi together.

Pooja Performance
Ganesh Chaturthi
Festival
How was your Experience