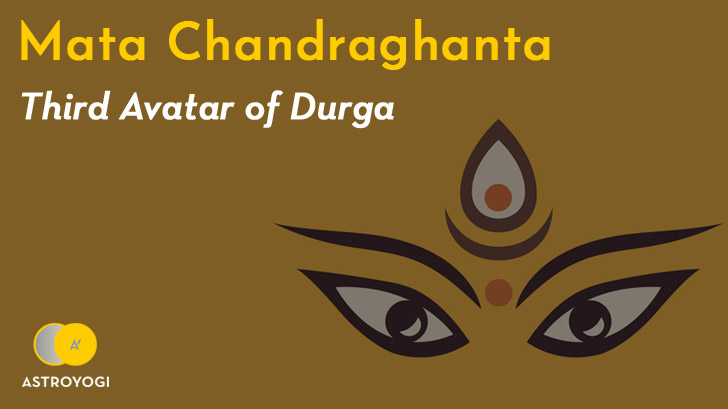 On the 3rd day of Navratri, Maa Chandraghanta is worshipped. She represents knowledge and bliss and people pray to her for prosperity, success, and peace. It is believed that her blessings eliminate all the bad energies, sins and sufferings from her devotees’ lives. She has a half moon on her forehead in the shape of a bell which gives her the name 'Chandraghanta'. She rides a lion, has ten arms, three eyes and possesses three weapons in her hands that demonstrate bravery and strength.

Expert Vedic astrologers at Astroyogi could guide you on how to perform Navratri Poojas based on a detailed horoscope analysis.

On a table, place the Goddess’s idol or picture and then sprinkle some Ganga Jal. On the table, place some water in a brass or sand pot and keep a coconut above it. Make arrangements for giving a bath to the Goddess and keep all items needed for her puja such as clothes, garlands, flowers, bindi, bangles, roli, coconut, fruits etc. Invoke the Goddess and pray to Ishta Devta and at the end, perform the aarti.

Spirituality
Pooja Performance
Navratri
Festival
How was your Experience