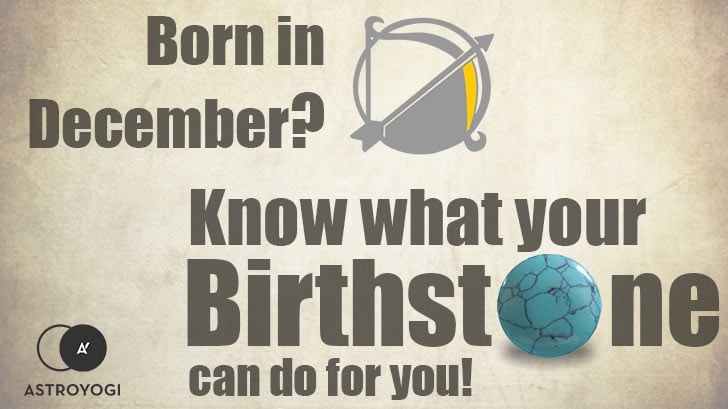 December Birthstone - A  birthstone is a gem that is bound to tag along with the person born in that particular month as it channelizes the positive energies of the universe and pours it into the being of the person. The month of December brings with it three beautiful birthstones namely Tanzanite, Zircon and Turquoise. A person born in December can choose from these three splendid stones that would make the wearer look gorgeous. To identify the birthstone that you must wear, talk to our astrologers who can help you find the birthstone that will yield you the best results.

Earlier, birthstones were determined by the color of the gems rather than their quality and structure. But now things have changed a lot and every month has different birthstones that come in a wide variety of colors. It was believed by the ancient people that every child brought with him his destiny and these birthstones enhanced prosperity and good luck in his family.

Tanzanite is a splendid stone that originated in Tanzania. Bluish-purple in color, the stone has gained immense popularity due to its recent discovery in the year 1967. The stone reflects different colors from different angles like the intense ultramarine subdued by the peppy violet shades. Naturally occurring tanzanite has some brown hues as well that are removed by treating it with heat so that a glowing purple-blue stone is obtained. The rare beauty of tanzanite makes it the ideal gift that marks the 24th anniversary of a couple.

Turquoise is yet another sparkling stone that dates back to the 13th century. Known for its sky-bluish hue with a tinge of dark green, it is one of the rare minerals that has lent its name to a color that is exactly similar to its shade and  has also been referred to as ‘Persian blue.’ The term ‘turquoise’ was derived from the French phrase ‘pierre tourques’ that refers to the Turkish stone that had been sent to Europe from Turkey. Arizona is the world’s largest producer of turquoise followed by California, New Mexico, and many other countries. The stone is largely exported by the United States of America and forms a significant part of the Native American Jewellery. It must be noted that turquoise may lose its brilliance by coming in contact with direct sunlight, makeup items, scents and natural oils. It is a highly admired stone that marks the 11th anniversary of a couple.

Zircon is a dazzling gemstone that exists in an array of colors that range from stunning red to brown to striking blue. In its natural form, the zircon is found as brownish-red in color but on constant heat treatment it changes its color to golden or blue. While the blue zircon is the December birthstone, the golden color directly refers to the meaning of its name. The word ‘zircon’ is derived from the Persian ‘zargun’ which means “gold-colored.” The changes in color are due to the impurities added to the mineral but these may also develop radioactive properties in the mineral. The radioactivity is eliminated by exposing the stone to high temperatures. This property also helps in determining the dating of the formation of the Earth as this mineral is one of the oldest that can be found in the depths of the planet.

Do you want to know about the impact these birthstones will have on you? Speak to our astrologers and find out the stone that best suits your personality

How to Wear the December Birthstones:

Blue is the hue that rules the shades of all these birthstones in some way or the other. These stones can be worn as pendants, diamond sets, halo earrings, stud earrings, drop earrings, fashion rings, halo rings, and brooches.

Tanzanite is the latest December birthstone that is said to soothe the senses of the wearer and make him/her calm and composed. Zircon is a powerful mineral that is said to avert evil influences, enhance knowledge and bring opulence to the wearer. It is believed that turquoise is an imperishable stone that vouchsafes a person against any odds. It promotes wealth and prosperity in the life of the wearer.  Wearing turquoise also promotes positivity and relaxation in a person.

Tanzanite is an effective stone that eases out the tension building up in one’s mind and settles down the issue of interpersonal communication. Zircon is considered to be one of the gems that forms a part of the auspicious ‘navratna,’ and is said to bring prosperity and wisdom to the wearer. It provides quality sleep to the person without any nightmares, wards off evil spirits and helps in reducing pain and increasing the appetite of a person. Turquoise gives peace to the wearer and augments good health and fortune for those who wear this spectacular gemstone.