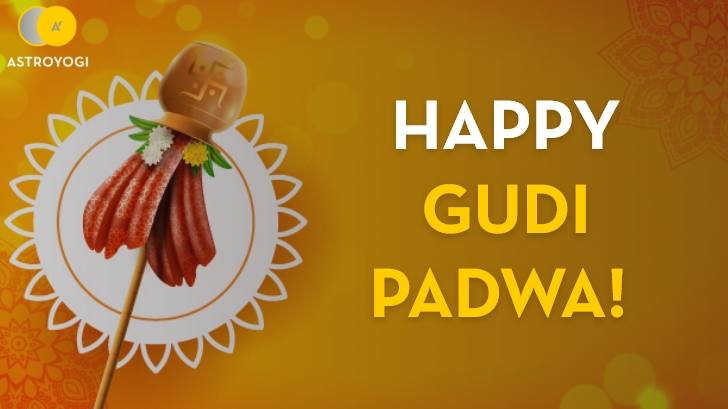 The Marathi New Year, Gudi Padwa, holds much importance for people. It is celebrated with great enthusiasm by many Indians. Read here to know all about this festival.

The festival of Gudi Padwa marks the beginning of the New Year according to the Luni-solar (Amanta) Chaitradi Hindu calendar. Gudi Padwa is observed with a lot of zeal on the first day of the Chaitra month.

Gudi Padwa is commonly known by various names in different regions of India. The New Year celebrations associated with Gudi Padwa are a massive occasion in Maharashtra. In Andhra Pradesh and Karnataka, this particular auspicious occasion is observed as Ugadi and Yugadi. In Gujarat, Sindhi Hindus observe this occasion as Cheti Chand.

Let’s get to know more.

Gudi Padwa 2022 Date And Time: When Will It Be Celebrated?

Gudi Padwa, also known as Samvatsar Padvo, is celebrated as the first day of a New Year by Konkanis and Maharashtrians. It is believed that the new Samvatsara, which is a cycle of sixty years, begins on this day. You should know that all the sixty years are identified by unique names.

The Luni-solar Chaitradi Hindu calendar denotes a calendar system that considers the month of Chaitra as the start of a new year. The term 'Chaitradi' means 'the beginning with Chaitra.' Gudi Padwa falls on the first day (Pratipada Tithi) of Shukla Paksha or the bright phase of the Moon in Chaitra. As per the Gregorian calendar, this festival falls in April every year. The occasion of Gudi Padwa 2022 will fall on 2nd April 2022 (Saturday).

Given below are the important dates and times for this occasion.

Do you have any astrology-related questions? If yes, turn to Astroyogi right away!

What Is The Significance of Gudi Padwa?

The Gudi Padwa festival marks the arrival of the spring season or the Vasant Ritu. Gudi Padwa marks the traditional New Year for Konkani and Marathi Hindus; however, it is not limited to them only; many other Hindus also observe this occasion. It is celebrated in and around Goa, Maharashtra, and the union territory of Daman on the first day of Chaitra, according to the Luni-solar Amanta calendar.

The farming community celebrates the Gudi Padwa festival as their harvest festival, especially in Maharashtra and Goa. This marks the end of the Rabi season, which is why this becomes the most important harvesting time for the farmers, as it consists of the reaping of Rabi crops. This festival is celebrated as Ugadi in some parts of Karnataka and Andhra Pradesh. The Ugadi rituals are different from that of Gudi Padwa. But, the essence of the day remains the same.

The festival is celebrated with enthusiasm and zeal as it holds a lot of importance. The word 'Padwa' originates from 'Paddava,' signifying the first day of the waxing Moon. The other word, 'Gudi,' means the emblem or flag of Lord Brahma, which is raised on this day.

According to mythology, the Gudi Padwa festival is considered quite important. This particular festival is associated with the mythical day on which the divine Hindu God- Lord Brahma, created the universe. According to the scriptures, it is from this day onwards that the concept of time came into being. Additionally, this festival also commemorates the crowning of Lord Rama as the rightful king of Ayodhya upon his return to his kingdom after completing fourteen years of exile. The Gudi (flag) symbolizes the divine Lord Rama's triumph over the immoral and evil Ravana. This flag is hoisted to symbolize the triumph of good over evil and how the victory of good is always held high. The 'Gudi' or flag on the stick is similar to the victory flag that flutters in the sky.

What Are The Rituals Associated with Gudi Padwa?

The spring festival, Gudi Padwa, holds enormous significance. It is observed with a lot of gaiety and zeal.

Here are the rituals associated with Gudi Padwa.

Traditionally, Maharashtrian women drape a traditional Nauvari saree or a Kashta, a nine-yard saree tucked at the back, whereas the men wear Kurta with Pajama or Dhoti. They also wear a red or saffron turban. People believe that by hoisting the Gudi, one can pave the way for happiness, prosperity, and good luck in their homes and lives.

As the Gudi Padwa festival marks the beginning of the New Year, people pray for prosperity, good health, and happiness. Many people also visit nearby temples. It's also quite common for people to light lamps to welcome the New Year. The occasion of Gudi Padwa is all about new beginnings. Additionally, the Gudi Padwa Muhurat is significant as it falls under 'Sadhe Teen Muhurat.' As per Vedic astrology, any work conducted on the days that create 'Sadhe Teen Muhurta' will give positive results.

Apart from the earlier regions where Gudi Padwa is celebrated with much gusto, this occasion is also significant for North India. In many North Indian states, this same day marks the beginning of Chaitra Navratri festivities, culminating in Rama Navami.

If you have any questions about Gudi Padwa 2022 or want to make the most of this festival, get in touch with Astroyogi astrologers right away!