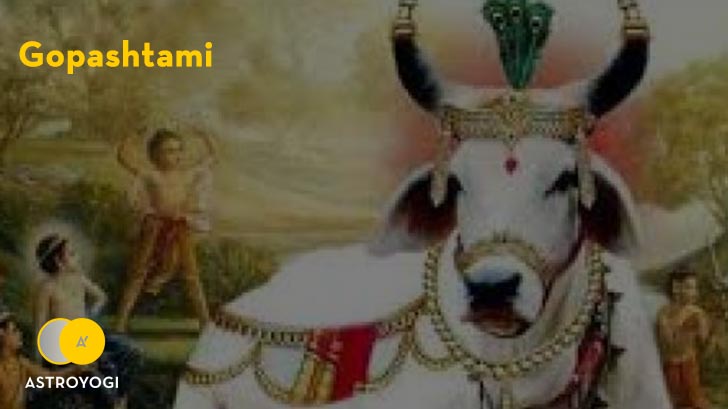 The festival of Gopashtami is celebrated on the eighth day in the Hindu month of Kartik, during the period of Shukla Paksha. According to the Gregorian calendar, it falls in October and November. This festival is associated with Godhan.

The festival is dedicated to worshipping and offering prayers to the cows. It is a well-known fact that members of the Hindu community believe cows to be the reincarnation of God. And so, on this day, people pray to cows and show gratitude and respect to these animals, who are regarded as life-givers.

Consult our expert astrologers on Astroyogi.com to learn more about Gopashtami Pooja methodology and Muhurat.

In the Hindu culture, cows are referred to as 'Gau Mata' and are worshipped like a Goddess. For Hindus, cows are regarded as the soul of their religion. They believe that cows are pure and sacred beings who are to be revered like deities. According to Hindu mythology, it is believed that several divine deities reside inside a cow, which is why they occupy such an exceptional place in the heart of Hindus.

This sacred animal is believed to be the keeper of spiritual and divine qualities and is even considered a manifestation of Goddess Earth. Therefore, it is commonly believed that those who worship Gau Mata on the eve of Gopashtami will be blessed with a happy, harmonious, prosperous, and fortunate life.

While there are several stories associated with the celebration of Gopashtami, the most famous legend is linked to Lord Krishna. According to the legend, on the specific day of Gopashtami, Nanda Maharaja sent his sons, Lord Krishna and Lord Balaram, to herd the cows for the first time since they had both entered into the Pauganda age, i.e. ages between 6 to 10 years. Therefore, from this day onwards, they would both be in charge of herding the cows.

According to another legend, it is believed that Lord Krishna suggested the people of Braj stop their annual offerings that were made to Lord Indra. This angered Lord Indra, and because of his ego, he wanted to show his might and power to all the people in Vrindavan. He decided to flood the region of Brij so that the people bowed before him. This resulted in seven days of prolonged torrential and unrelenting rain in the village.

The ritual of worshipping cows and calves is similar to Govatsa Dwadashi in the state of Maharashtra. The cows are worshipped to seek blessings for a happy, harmonious, and prosperous life. If there are no cows in the house, devotees should go to a cowshed and serve the cows.