Who Will Win The Delhi MCD Election 2022? Astrology Has Amazing Insights! 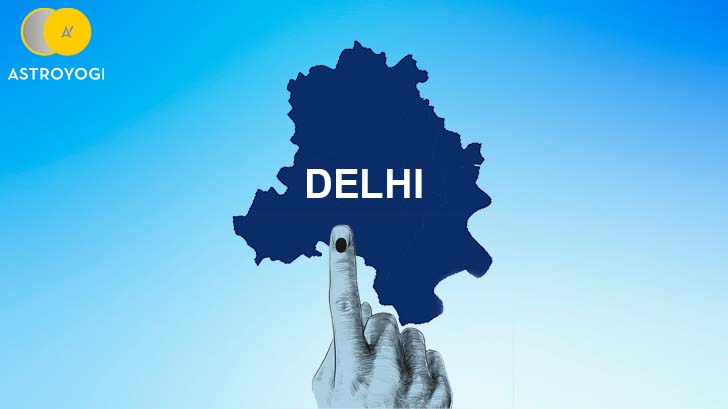 The highly-awaited Delhi MCD Election 2022 was held on 4th December 2023 (Sunday). India's top political parties have put their best foot forward to give each other tough competition, and speculations are rife on which worthy party will win. Are you wondering which party will seize power in the civic Delhi election? If so, here are some astrological insights into the high-profile Delhi MCD election.

The Delhi election polling date was 4th December 2023 (Sunday), as announced by the Election Commission of India, which saw people lining up to cast their votes. The Delhi election result date is 7th December 2022 (Wednesday). In the Delhi election, there is tough competition between Bharatiya Janata Party (BJP), Congress, and Aam Aadmi Party (AAP) in the polls. Campaigning for the high-profile Delhi MCD Election has been in full swing for the last couple of days; no doubt, everyone wants to know who will win the election and is eagerly waiting for the results.

This article will give a detailed analysis and predictions of the Delhi MCD Election 2022 as per Mundane astrology, Vedic astrology, KP astrology, and Tarot card reading.

What Can Astrology Reveal About The Delhi MCD Election?

As per astrology, the party leader and their destiny play a huge role in them winning the election. The main competitors, BJP and AAP, are seeking victory in this high-stakes contest. AAP's leading face, Arvind Kejriwal, and BJP's leading face, Narendra Modi's horoscopes, play a key role in determining who has a better chance of emerging as the next ruling party.

Astrological Insights Into The Aam Aadmi Party's Chances of Winning

Let's get some ideas about Arvind Kejriwal's horoscope.

As per his horoscope, a strong Raj Yoga is being formed by Venus and Mercury, and Jupiter is also supporting this. Along with this, the individual has a good Saraswati Yoga, which will make him intelligent. This also gives him the immense potential to use his knowledge at the right time. That's why you will notice Arvind Kejriwal has the skills to be a strong competitor for whom there could be a turning point in the Delhi election.

During the time of the election, the Dasha phase of Jupiter-Moon-Rahu is going on. Jupiter signifies the 4th, 1st, and 6th house as per KP Astrology, which helps him pinpoint the smallest mistakes made by the opposition leaders. The overall Dasha, Antardasha, and Pratyantara Dasha show that Rahu, which signifies the 4th and 11th houses, can give sudden rise and success to the natives. It can also provide the natives with sudden ideas to influence people around them to get advantages. The Ascendant lord Venus is situated in the Moon's Nakshatra, strongly showing that his followers have a good chance of dominating other parties' followers to create an environment that gives him fame and favors his party’s chances.

The Mundane astrology and destiny of the leader state that before the voting dates, the party will use every resource to show their charitable deeds and by giving accessible facilities to the public. They would have also given assurance to provide better facilities to the public if they won. What is in AAP's destiny can only be known once the results are finally announced.

Also Read: Quick and Easy Tarot Advice That You Can't Miss in December 2022!

Astrological Insights Into The Bharatiya Janata Party's Chances of Winning

Now, let's look into Narendra Modi's horoscope chart and learn how BJP will perform in this Delhi MCD election 2022.

According to the horoscope, there is a Scorpio sign and Lagna, and the Chandra Mangal Yoga is being created; the Moon is weak in Scorpio, but with some remedies, it will give the native strong power to dominate. In the Dasha phase, Mars, Rahu (signifying the 4th house and 10th house as per KP astrology), and Mercury (signifying the 10th house as per KP astrology) are going on. But before the Delhi election result date on 7th December 2022, Ketu will enter Pratyantara Dasha, which will be a turning point for this Delhi MCD election 2022. Ketu, which is in the 11th house in his chart along with Sun and Mercury, will create trouble in attaining victory at the state level. This might also create overconfidence in the BJP leaders on the state level. Ketu Pratyantar in Mars and Rahu might cause a detachment from ordinary people when they need the BJP leaders. People's expectations are huge from the party; however, due to the Mars-Rahu's Dasha and Antardasha, the BJP leaders might find it a bit challenging to achieve their aim even when they are doing their best. The planet Ketu can spoil the success of his party. However, the final results can only be seen when the Delhi election result is announced.

The Mundane astrology states that BJP will fight strongly and challenge all its opponents. Due to Rahu, BJP would give its opponents challenges and tough competition. Due to the Mars and Moon connection in the Mundane chart and the Sun, Venus, and Mercury being in Scorpio in transit, BJP will find that the results are not as good as they had expected. However, what transpired in the Delhi election can only be known once the results are declared.

Apart from AAP and BJP, Congress is another contender in the election. As per astrology and the leading face, i.e., Rahul Gandhi's details as present in his horoscope, his 11th house is not strong enough to win this election. Due to his weak Antardasha, mass fame and acceptance will be a bit tricky to come by. The party members and leaders will try their best to convince the public, but success will take a lot of work to attain. This is because the lord and sub-lord of his ultimate house of success are both weak at the time of the election and declaration of the election results. However, what lies in Congress's fate, in reality, will only be known when the Delhi election result is announced.

From the above calculations based on Mundane astrology, Vedic astrology, and KP Astrology, what can be said is that Arvind Kejriwal's horoscope shows a good chance of his party winning, but the other contenders aren't far behind; they too can turn the election in their own favor. All the contenders have brought their A-game to the Delhi election. Still, only the announcement of the results can tell us who emerged victorious.

What Can The Tarot Card Reading Reveal?

Below are the insights from the Tarot spread for the outcome of the Delhi MCD Election 2022.

In this 3 card spread, the cards stand for the following.

The 1st Card- The Star Upfront

This card signifies Kejriwal and his party. It represents a bright future, success, fame, and glory. It is also a positive card that shows winning.

The 2nd Card- The Hierophant

The Hierophant card signifies Modi and his party. It represents a need for blessings, support, and proper guidance for success and winning. It's not as strong as the 'Star Upfront' card.

This card represents the Congress party. It is not a positive card; it signifies struggles and the need for more effort.

Here is what can be understood from this Tarot card spread.

The 'Star Upfront' is stronger and brighter and symbolizes winning. The 'Star Upfront' states that the possibilities are stronger for Arvind Kejriwal's party to win this Delhi MCD Election 2022. The Hierophant is also a positive card but not as positive as the Star.

According to Vedic astrology, KP astrology, Mundane astrology, and Tarot card reading show that Arvind Kejriwal and his party will give tough competition to their competitors and might gain power. At the same time, the competitors, especially BJP, will give tough competition, with a good possibility of turning the tide in their favor. The Delhi MCD Election 2022 will a nail-biting battle, and only time will tell what the outcome will be.

Are you looking for astrological guidance? If yes, contact Acharya Namrajit on Astroyogi right away.